The interplay between sexuality, sex, sexual and reproductive health and human rights is not a mere question of biology, but of palpable matters of power, politics, and patriarchy. 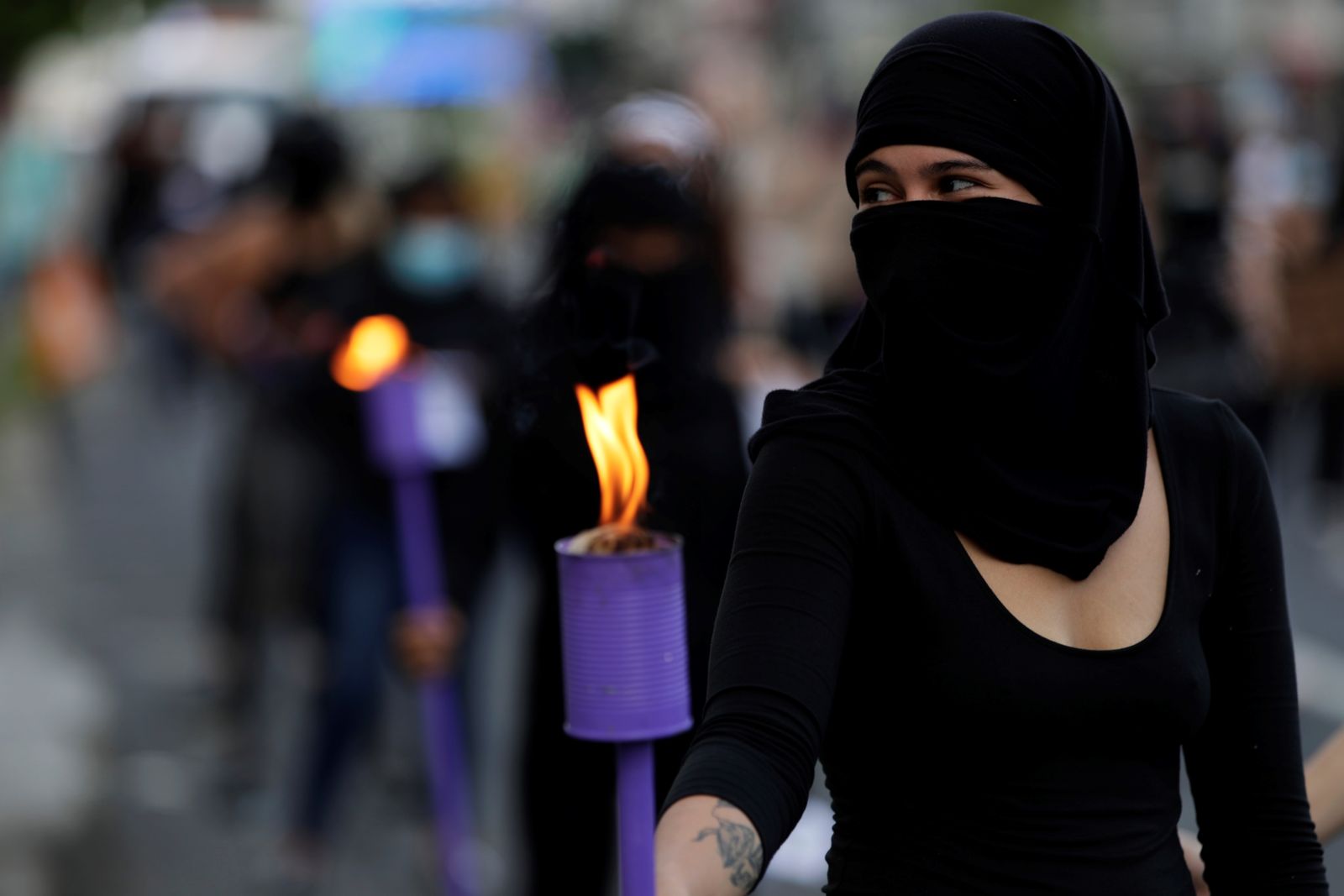 A woman with her face covered participates in a feminist protest in one of the main avenues of Panama City (Panama). The "Empty Pots of Panama" movement criticizes the Panamanian state for negligence and the lack of measures with attention to gender and sex perspectives to face the COVID-19 pandemic. EFE / Welcome Velasco

Sex. The pleasure of it and its intimacies. Its excitement and dread. Its uncertainties and silences. The cruelty of it—its violence when abused to exercise power. Its longed-for outcomes, and its unintended. Its unwelcomed consequences, from mild infection to life threatening ones, and its central role in human development, in human expression and gendered identity. Human sexuality in its diverse forms and expressions goes to the very heart of human dignity, belonging, meaning—and human rights too.

As fundamental as they are ubiquitous, sex and sexuality are enmeshed in a wide variety of cultural norms, mores, attitudes, and values. But they can also be grave matters of life and preventable death. There is now broad recognition that a person’s ability to manifest their sexuality consensually, and to sustain the highest attainable standards of sexual and reproductive health in doing so, is a matter of human rights.

The interplay between sexuality, sex, reproduction, health and human rights is not a mere question of biology, but of palpable matters of power and powerlessness.

And yet, across the international community, discernible efforts are in play to push back against human rights in this context—regressive efforts that impact the willingness and capacity of duty bearers to uphold their legal obligations; that weaken applicable normative standards; that are evident in attacks on providers of essential services. These efforts roll back the protections and affirmations of everyone’s right to express their sexuality without fear; to experience pleasurable and safe sexual intimacy; and to positive sexual and reproductive health outcomes.

Why would a communion of state and non-state actors orchestrate such a concerted, well-funded campaign to erode these human rights protections? The answers lie in the dynamic often perverse relationship between power, politics, and patriarchy.

The Power of Power

The interplay between sexuality, sex, reproduction, health and human rights is not a mere question of biology, but of palpable matters of power and powerlessness. Power, implicit and explicit, is found at each step along the public policy chain, from whether people are empowered to seek and receive acceptable and affordable care, to how public resources are distributed, and the ways in which global policy dialogue unfolds.

Those with undue power—from inter-personal level to institutional level—unchecked by accountability seek to wrongly restrict the rights of those with less power, obstructing their enjoyment and imposing illegitimate penalties such as criminal sanctions for exercising these rights. If denied their rights, and without the social, cultural or economic power to claim them, whole populations of rights-holders can be excluded from even the most essential information, support, and services (e.g., family planning, safe abortion, comprehensive sexuality education).

The Power of Politics

The global can affect the local. Even at the most macro-levels, dominant politics and ideologies can profoundly influence an individual’s realization of dignity in the most intimate realms of their sexuality and their sexual and reproductive health well-being. Ruling ideologies and politics can promote target-driven approaches to reproduction as part of a country’s development goals, encouraging or discouraging reproduction among certain groups (e.g., reproductive autonomy of women with disabilities, by passing laws mandating that they are sterilized) and privileging certain notions of sexuality to the detriment of others (e.g., adolescent sexuality is an area where social norms about what is appropriate sexual behavior of young people have significant influence, limiting government will to implement evidence-based programs).

Dominant religious and cultural ideologies disrespectful of human rights can bleed across borders into public policy and practice, distorting the rules and standards of health systems, skewing the distribution of resources, and influencing even how health care providers treat people in their care. For example, services focus on sexual diseases prevention but not on sexual pleasure; on maternal health but not on access to safe abortion; on minimum menstrual hygiene for girls but not on broader adolescent sexuality. The results are distortions of the continuum of care whereby crucial rights go missing in action, left at best for clandestine response only.

We urgently need far stronger action against the ways in which power, politics, and patriarchy influence sexual and reproductive health and rights.

National politics and ideologies also play out in regional and global dialogue and negotiation. Countries, notably those under populist, nativist leadership, seek to influence the international agenda for their national political interest rather than in accordance with their country’s commitments under human rights law, as evident from recently concluded negotiations on political declaration on Universal Health Coverage. The result is policy incoherence and disconnects with impacts far beyond national borders. Yet, the normative standards of human rights and their associated obligations provide the impartial bedrock that inclusive and just policy and law need. Rights frameworks help expose, assess, and challenge systematically the inequalities, ideologies, and impunity that distort dignity in the interplay between sex, sexuality, identity, reproduction, and health.

The Power of Patriarchy

The persistence, overreach, and interplay between anti-science and anti-human rights influencers, specifically on public policy on sexuality and health, require further exposition. Its evidence is seen in: toxic masculinities, homophobia, the perverse dynamic between sexism and racism, and in the opprobrium that adults direct against adolescent sexuality. The long shadow this patriarchy casts is evident, for example, in the ways family planning resource allocations have long skewed away from choice, among modern-methods, towards long-acting contraception and even sterilization for certain groups of women such as poor women, women with disabilities, and ethnic minorities. It’s present when child marriage is tolerated on grounds of custom and faith rather than denounced for the child abuse that it is. It’s there when a victim of sexual violence is required to marry the perpetrator; when governments leave rape in marriage unchallenged, or limit if not deny outright the sexual and reproductive autonomy of women with disabilities.

Patriarchal assumptions and aspirations are behind actions that strip away individual and professional autonomy within the sexuality and health spaces. Certain governments, for example, have taken to invoking anew undue restrictions on access to the full range of information, goods, and services needed for enjoyment of sexual and reproductive health, a pattern clearly evident in the context of the COVID-19 pandemic. Imperiling provision of quality care clinically, interfering improperly with professional practice, and arbitrary repurposing of funding away from sexual and reproductive health is in direct contravention of norms and standards for both health and human rights.

The excuse may be the religious or cultural beliefs of the powerful, but the consequences are far from ethereal: services deteriorate; access narrows; health professionals’ attitudes, inclusiveness and responsiveness decline; and, as stigma mounts, otherwise preventable morbidities and mortality escalate. Far beyond the clinic cubicle, non-dominant gender identities emerge as acceptable targets for sexual and sexuality-related violence while a web of patriarchal structures and standards sees gender “norms” stratify us into hierarchies of privilege and disadvantage, with only some of us deemed “worthy” of rights.

Today’s geopolitics are pernicious against human dignity in the intimate realm. Their toxic influence threatens to derail carefully articulated global human rights standards, distort scientific guidance on essential health care, and weaken domestic implementation. We urgently need far stronger action against the ways in which power, politics, and patriarchy influence sexual and reproductive health and rights. We must expose how their dynamics delay, derail, and deny human rights, and denounce complicity by national and multilateral institutions and the actors within them.

Dignity in intimacy and identity must be upheld specifically in health care. Universal human rights standards provide a touch stone, but their mere articulation is far from sufficient. Stronger, active, and organized resistance to state sponsored regression is fundamental, particularly from the health professional classes. But in turn this requires a far deeper, more intersectional analysis and action on power and powerlessness in global and local health, specifically with respect to gender, race and equality across all identities.

This piece is part of a series published in partnership with Occidental College’s Young Initiative on the Global Political Economy, division of Social Sciences at Arizona State University, and USC’s Institute on Inequalities in Global Health. It flows out of a September 2019 workshop held at Occidental on “Cross-cutting Global Conversations on Human Rights: Interdisciplinarity, Intersectionality, and Indivisibility.”

Rajat Khosla is an adjunct research professor at the Institute on Inequalities in Global Health at USC’s Keck School of Medicine.