What do inequalities, Covid-19, and human rights have to do with each other? 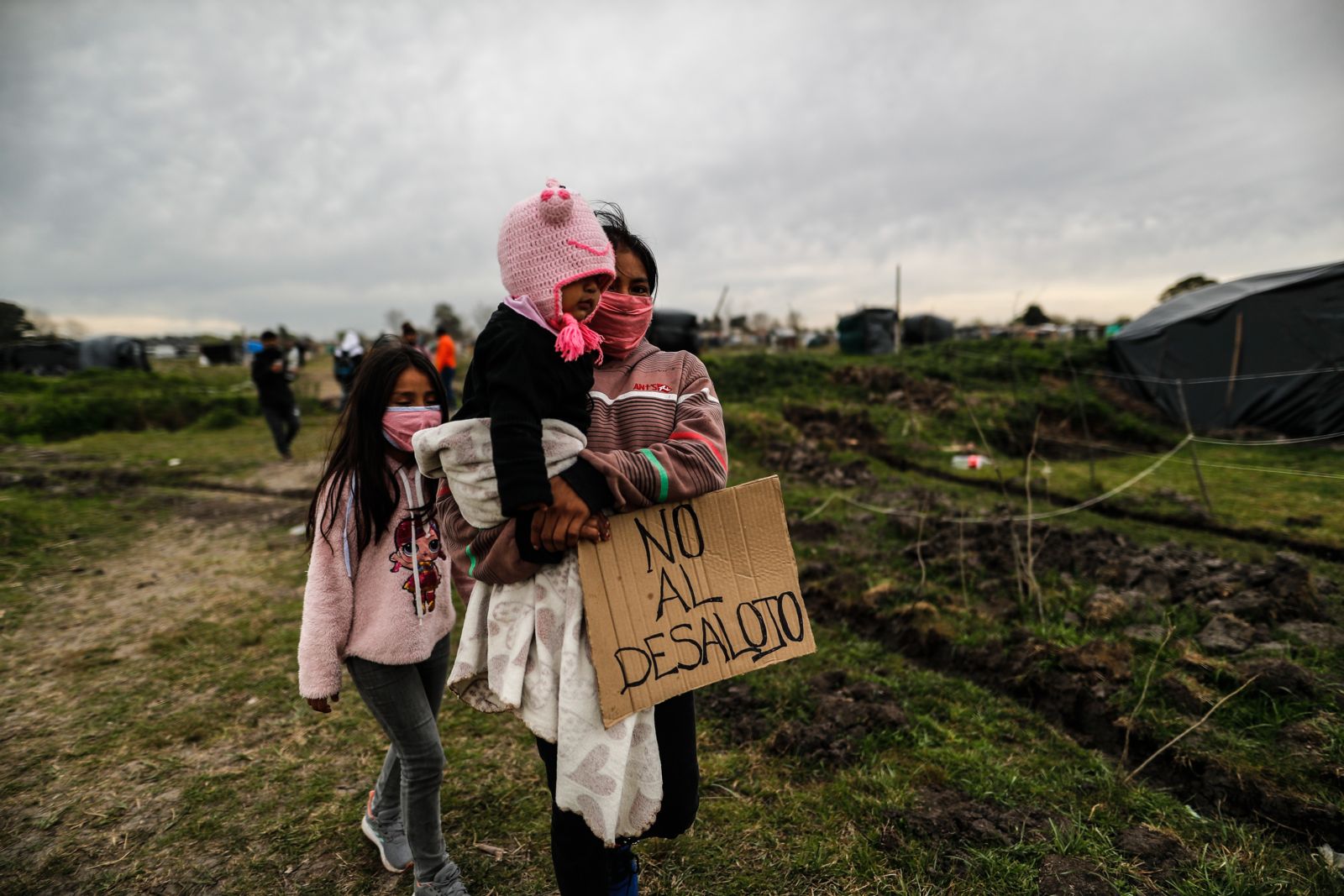 A woman walks with her daughters during a demonstration against evictions on September 15, 2020, in the land grab in the town of Guernica, 30 km from Buenos Aires (Argentina). More than a thousand people living in poverty have settled since July 20 on a 100-hectare site located in Guernica, making up the largest land grab in the province of Buenos Aires. EFE/ Juan Ignacio Roncoroni

Latin America is the most unequal region in the world, and it is also, as of September 2020, the one that has the most Covid-19 victims. What do inequalities, Covid-19, and human rights have to do with each other? Persistent inequalities explain why the virus and the recession are affecting disadvantaged groups. At the same time, we are discouraged from aspiring to return to the pre-Covid-19 state. This article presents the main arguments of the collective book on Covid-19 and human rights that, prefaced by Michelle Bachelet, has just been published in Argentina.

The disease, measures to contain it, and its social and economic effects impact lower-income people or those in other vulnerable groups at a higher rate and exposes them to multi-faceted and intersectional discrimination. The poor are infected and die more from Covid-19 and have fewer resources to deal with the economic recession in Latin America, which is estimated to have thirty million more poor people by the end of 2020. And if they are women, migrants, refugees, people with disabilities, people in confinement contexts, adults and older adults, children or adolescents, or belong to a racial, ethnic, religious, linguistic, or sexual minority, the impact on their shoulders is multiplied.

But it is not the virus that discriminates, but the people and the social and economic infrastructure that favors some (few) people over others (many). The withdrawal of States in areas that are deeply sensitive to human rights—such as housing, health and education—an economic-legal system that legitimizes the concentration of capital to the point of paroxysm; a labor market that institutionalizes exploitation; the increasing protection of monopolistic patents; the naturalization of regressive fiscal policies; as well as the commodification of economic and social rights explain a scenario in which inequalities and consequent poverty are associated with both higher levels of contagion and lethality of Covid-19, in addition to the violation of social and economic rights.

The disease, measures to contain it, and its social and economic effects impact lower-income people or those in other vulnerable groups at a higher rate and exposes them to multi-faceted and intersectional discrimination.

Thus, it should not be surprising that the notion of strategic sovereignty is emerging, which now focuses on the responsibility and power of national states to effectively protect the health of the population and guarantee the provision of essential goods and services and with it, social reproduction. It would be an economic model focused on people's needs and human rights rather than on the expansion of capital. This notion of strategic sovereignty challenges some pacts forged during hyperglobalization, such as the unlimited flow of international trade; the protection of foreign investment; the free movement of people around the world; the inviolability of intellectual patents; the deregulation of financial capital; the financialization of virtually all aspects of life, labor flexibility; the minimization of social protection systems; short-term fiscal discipline; and the commodification of essential public services such as health. Reversing these trends does not seem to be bad news for human rights.

Indeed, as Ignacio Ramonet warns, the screams of agony of the thousands of sick people who die from not having beds in intensive care units will long condemn fans of privatizations, cuts, and austerity policies. WHO has already identified each of the low-income countries that followed the IMF's recommendation over the past three years to cut or freeze public employment as countries experiencing critical deficits in health workers.

Whether the new normal is an oxymoron that will continue to benefit elites or if it instead involves a true transformative agenda depends on all of us. It is something that is built day-by-day, first of all, from the confrontation of ideas. We cannot overestimate the significance of imagining a transformative agenda and putting into words a human rights perspective to confront the pandemic. Indeed, when we note  that countries with similar GDP have very different results in the protection of the rights to life and health, it is obvious that, in addition to having resources, States need to deploy "good governance", in which the notion of human rights must be a central part.

Whether the new normal is an oxymoron that will continue to benefit elites or if it instead involves a true transformative agenda depends on all of us.

In order to weigh the costs and benefits of protecting and promoting human rights, we must be concrete and articulate. This is evident when we study the impact of health policies on human rights beyond life and physical health. In the face of the medical paradigm – which favors the biological aspects and survival of people – as a legitimate discourse that influences regulations, practice models, and social representations, another more holistic one emerges. To what extent is it legitimate to forsake freedoms on the altar of a strictly sanitarist vision? International human rights law provides precise guidelines for answering this fundamental question, and this is one of the central points addressed in the new book Covid-19 and human rights: The pandemic of inequality.

The large economic slowdown, which has exacerbated the economic challenges that several countries in Latin America were already facing in February 2020, has led to an increase in poverty and a decline in economic and social rights. In this context, only elites are capable of resilience in the face of sudden macroeconomic changes. Again we see that, beyond the urgent actions that should be taken to serve the population most affected by the crisis, a transformative agenda needs to be on the discussion table.

Human rights have a scientific, legal, and political purpose. They can shed light on the intricate economic, financial, social, and legal processes that perpetuate inequalities.  It is true that the effectiveness of human rights is limited. The levels of poverty and inequalities that exist in the world, and the presidents who suggest taking toxic substances to combat Covid-19 or who recommend not using face masks, without entailing any legal consequences, give us an indication of the impact of human rights in the real world. But this should not lead us to abandon the cause of human rights, but precisely to strengthen its system of protection which, to a large extent, requires reforming the foundations of the prevailing economic system. To this end, it is essential to investigate, report, and denounce the relationships between the pandemic, inequalities, and human rights.