Human rights violations are increasingly transnational, yet there are no organizations addressing human rights in Israel’s foreign policy.

A few years ago, I took the Brazilian ambassador to Israel to see the situation of Palestinian Bedouin communities in the West Bank facing imminent eviction from their homes in an area intended for Israeli settlement expansion. Such briefings are a routine part of the advocacy activities of the Israeli human rights community. The targets, however, had almost exclusively been Western European and North American diplomats.

Could Brazil, which is expanding its position on the global stage, play a positive role in promoting human rights in Israel-Palestine?

Israel enjoys extremely close relations with Western Europe and North America, economically, militarily and diplomatically. It therefore makes sense for human rights groups to make these countries the targets of advocacy activities and to encourage them to use various tools to promote greater respect for human rights in our context. Yet Israel has extensive and growing ties to countries across the globe. Why aren't these other states also part of the human rights conversation?

I do not believe the answer lies in a division of the world between rights-violating states and rights-promoting states—many of the latter also belong in the former category. The more relevant division is between states that, for whatever reason, see promoting human rights as part of their foreign policy agenda and states that don't. It makes no sense for Israeli human rights groups to try to engage the Chinese ambassador, but not because of his country's widespread and severe human rights violations. China is not an effective advocacy target, in spite of its extensive trade ties to Israel, because its government views human rights solely as a state's internal affair. The answer is not so straightforward regarding a democratic state like India, reportedly the largest customer of Israeli military equipment and Israel's second largest economic partner in Asia. As Muriel Asseraf writes “bilateral concerns are often stronger than any other interests, especially human rights.”

Israel is located geographically in Western Asia, squarely in the center of the Arab world. Yet our worldview is wholly Euro-centric, and this seems to affect the human rights community as well. So the Indian ambassador has never initiated contact with local human rights groups—but neither have we reached out to him.

There are many potential areas for fruitful engagement and cooperation with new and diverse partners: learning from similar challenges, offering lessons from our own experience and even working to promote human rights in third countries.

The conversation on internationalizing the human rights movement does not only concern the relationship of civil society to governments. It also concerns the relationship between various groups within civil society itself. In this respect as well, Israeli human rights groups may be overly focused on the global North. Our international partners largely consist of the international organizations based in the US and Europe. Yet there are many potential areas for fruitful engagement and cooperation with new and diverse partners: learning from similar challenges, offering lessons from our own experience and even working to promote human rights in third countries.

Israeli human rights organizations have a wealth of experience that could be useful to similar organizations elsewhere. The unique citizen journalism project we developed at B’Tselem broke new ground in exposing violations, generating public attention and promoting accountability.

The project’s founder took our local initiative and built it into an international model, through the London-based Videre. Videre now uses video cameras to promote human rights in countries around the world.

In turn, I am sure organizations in other parts of the world have developed successful local strategies that we might learn from and adopt to our context. Israeli groups struggle with the question of how human rights organizations can play a role in conflict resolution without becoming political organizations. Organizations in conflict zones around the world wrestle with this question, and undoubtedly can provide different perspectives and answers.

Recently I took part in a panel discussion organized by a US organization on the topic of popular hostility to human rights organizations within our own societies during times of war. My colleagues on the panel were human rights activists from Colombia, Russia and South Sudan—not the usual company to which Israel would like to be compared, yet a very fruitful conversation for strategizing on promoting human rights in conflict situations.

Religious control of personal status laws presents another human rights challenge. Just like most of our neighbors in the Middle East, in Israel marriage and divorce are governed exclusively by religious law, with all the problems this poses for women’s rights and religious freedom.

Of course, dialogue on this issue is hampered by our broader geopolitical reality. Palestinian human rights organizations indeed are an active part of the region’s civil society. With their high levels of expertise and capacity, they have much to contribute to the regional promotion of human rights. Palestinian experts train Arab human rights activists and serve as a model of professionalism. Palestinian activists also responded to the Arab Spring in gestures of solidarity and tangible forms of support, like fact-finding missions.

Israeli organizations are more limited in their ability to engage in this sort of cooperation, certainly in the Arab world, but farther afield as well. The anti-normalization movement (advocating boycott of all things Israeli so long as Israel maintains its occupation of the Palestinians) has a chilling effect, sometimes even on engagement with Israeli human rights groups. 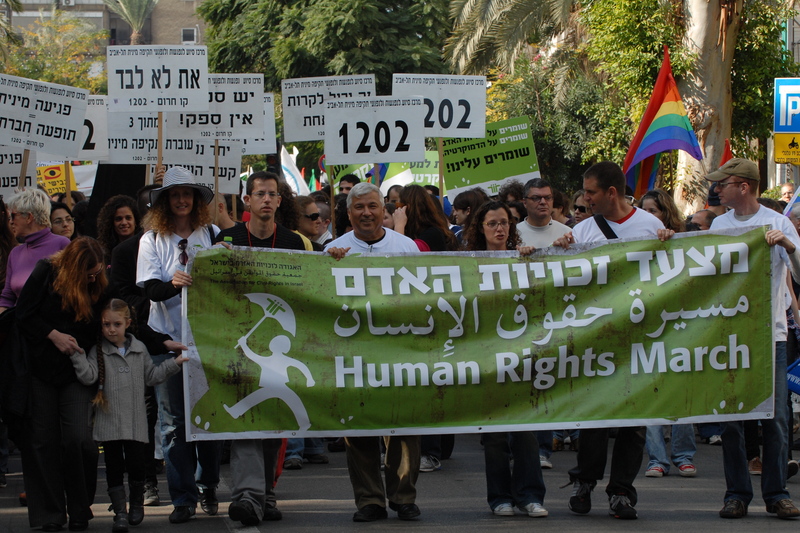 Hundreds of rights groups attend a human rights day march in Tel Aviv. Israel has an extremely vibrant human rights community, yet there are no organizations addressing human rights in Israel’s foreign policy.

Human rights violations are increasingly transnational, requiring new forms of cooperation. In Israel we have an extremely vibrant human rights community, with organizations addressing all aspects of the Israeli occupation, as well as domestic human rights concerns. Yet there are no organizations addressing human rights in Israel’s foreign policy. Who will ensure that Israel’s new Bilateral Investment Treaty with Myanmar does not exacerbate human rights violations in that country, for example? Who monitors Israel’s weapons sales, which are conducted with no scrutiny or public attention? Traditionally the only address for such projects would have been international organizations based in London or New York. Is it conceivable that human rights organizations in Israel and Myanmar, or in Israel and Nigeria (to give just one example of a country to which Israel sells arms) could work together to build a successful strategy to ensure respect for human rights?