There is compelling evidence that economic inequality is both a result of, and contributor to, economic crises

With global inequality at extremely high levels and still rising, there is an emerging consensus that the international community needs to tackle this growing problem. In September 2015, the Member States of the United Nations endorsed 17 sustainable development goals, including a particular goal to reduce inequality within and among nations. And yet, there is one particular facet of inequality that has been frequently neglected: the links between economic inequality, financial crises and human rights.

Inequality is both a direct and indirect cause of sovereign debt increase and financial crises. As increased levels of inequality mean that the income tax base of the state concerned is rather small—at least if income taxation is not progressive—inequality can exert a considerable direct influence on the structure and the level of government revenues and spending.

Empirical evidence clearly suggests that inequality, income tax base and sovereign debt are all connected.

One possible explanation for these links is that in very unequal societies there are higher incentives for default. By defaulting, like in the case of Argentina, a government may obtain new fiscal freedom—even if this freedom might be short-lived—permitting tax cuts or spending increases to benefit the poor. Yet, in the long run, default normally implies a (temporary) exclusion from financial markets, as the country is no longer eligible to borrow. For example, if the government can no longer use debt to replace taxes, it is forced to adjust tax revenues to short-term fluctuations. The resulting volatile taxation harms poorer households in particular.

Inequality can also indirectly contribute to increased sovereign debt and consequently to sovereign debt crises. There are at least two avenues to such outcomes: (a) high levels of inequality contribute significantly to the generation and increase of private debt, as households try to compensate reduced wage income with increased private borrowing to keep living standards; and (b) inequality adversely affects social and political stability, hampering growth and eventually affecting both government revenue and spending.

Financial and sovereign debt crises have, in turn, entrenched economic inequalities. Financial crises may massively hamper economic growth, principally because of decline in productive investment due to the contraction of credit. A study of several banking crises found that on average, the decline in real per capita GDP exceeds 9% (peak-to-trough), with a recovery time of two years. Combined banking crises and currency crises have resulted in an average output loss of 18.6% of GDP, with an average recovery time of three to four years.

Currency crises magnify the spread of poverty and inequality. After a financial crisis there may not always be an increase in inequality, as everyone’s income is likely to drop. However, income and wealth of the more affluent related to the collapse of stock markets are often short and recover quickly, while income levels of the poor remain low for a longer duration.

The austerity measures that governments often adopt in response to financial crises tend to have terrible social impacts, exacerbating inequality and pushing disadvantaged groups below minimum income thresholds. Adjustment programmes—such as those implemented in Greece—without consistent debt reliefs have proven detrimental to human development and human rights, at least in the short term. 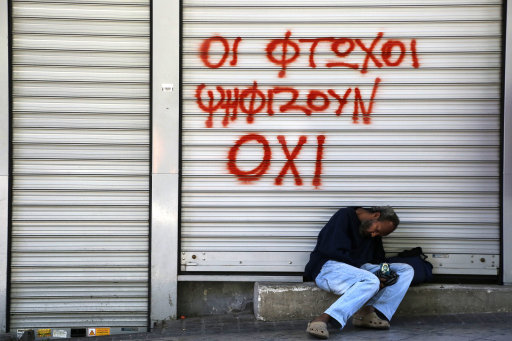 A man in Athens sleeps beneath graffiti that reads: “Poor vote NO”, regarding the Greece’s bailout referendum. Austerity measures, such as those adopted by Greece, often exacerbate inequality and disproportionately harm the most disadvantaged.

My report makes a number of recommendations, stressing the importance of financial market regulation, minimum wages, progressive taxation, and social protection floors to combat excessive inequalities and ensure better human rights compliance. Structural adjustment measures should be subjected to robust human rights impact assessments, and not only oriented towards short-term debt repayment. Policymakers must carefully analyse the distributive impact of adjustment, and prioritize measures prioritized to protect the most vulnerable.

When income inequality creates discriminatory outcomes, it becomes a human rights issue. The existence of extreme inequality results frequently in a situation that states are failing to meet their minimum core obligations under international human rights law, including the International Covenant on Economic, Social and Cultural Rights in relation to rights-holders living at the bottom end of income and wealth distribution. Either states fail to mobilize maximum available resources for the progressive realization of rights, or they fail to ensure essential minimum levels of satisfaction of economic and social rights.

Economic inequality also matters from a human rights perspective when it translates into other types of inequalities. The enjoyment of human rights does not depend only on access to the basic goods and services needed for survival; an individual’s access to resources relative to others is also of crucial importance. International human rights law prohibits the discrimination on the basis of social status (article 2 (2) of the International Covenant on Economic, Social and Cultural Rights). The economic situation of individuals often translates into unequal access to education, health care or other rights resulting in discriminatory outcomes within societies. It is therefore not surprising that more egalitarian advanced economies tend to ensure higher educational attainments and better health for a larger number of their rights-holders.

Inequality may not only contribute to the exclusion and marginalization of certain groups and individuals, it also can have substantial negative effects on the enjoyment of political and civil rights. Sometimes financial means can make a crucial difference whether one is able to hire a qualified lawyer to ensure to defend own rights against others or the state.

And if we do not recognize the connection between social and economic inequalities and civil and political rights, we risk capture of the political system by economic elites, effectively undermining citizens’ right to participate effectively, and meaningfully, in their country’s political system.