Academics, donors, journalists and political leaders are paying greater attention to intensifying governmental efforts to crack down on civil society organizations (CSOs) and constrain the space in which they operate. Freedom House, for example, has documented efforts to undermine political and civil liberties in a growing number of countries, causing a worldwide decline in freedom for the last ten years. Yet, in this struggle over the enabling environment for civil society, governments are not the only culprits. Armed non-state actors, criminal networks and violent extremist organizations are responsible for an alarming number of attacks against civil society—human rights defenders, bloggers and journalists, environmentalists, labor unionists and even social service delivery organizations—who advocate for values and policies that these groups reject. However, rather than using laws, regulations, caps on foreign funding, and complicated registration and reporting requirements—the preferred tactics of most governments—these armed actors often deploy brutal force against civil society. As a result, CSOs in many countries are being squeezed between governmental regulation and interference on the one hand and violent suppression by armed groups on the other—with freedom of association, assembly and expression hanging in the balance.

To date, the international community has been primarily focused on governmental efforts to use legislation and other legal restrictions on CSOs to limit their operability. The International Center for Not-for-Profit Law, for example, monitors legal barriers affecting the freedom of association in 50 countries and eight multilateral organizations. So why should considerations of closing space be broadened to include violence perpetuated against CSOs by armed actors? First and foremost, governments have an obligation to investigate and ensure accountability for violations under international human rights law and humanitarian law, regardless of the perpetrators’ affiliation. They also have an incentive to protect the space for civil society groups to operate. The pervasive menace of armed groups, criminal elements, and violent extremists not only threatens the safety of civilians but also the stability and security of states.

Tragic examples of this phenomenon abound. In Libya, human rights defenders and other members of civil society have been killed, abducted, tortured and forced underground. They have seen their homes raided and their offices forcibly closed, and they have faced death threats and other forms of intimidation at the hands of a variety of armed actors. The February 2015 killing of Entissar al-Hassaeri, a vocal critic of Libya’s militias and fierce advocate for a strong national army and police force, shocked Libyan civil society, as it was the first time that a well-known female civil society activist was targeted in Tripoli. Unfortunately, as in many other countries confronting lawlessness and impunity, women activists in Libya have borne the brunt of retaliation, harassment and violence by militant groups who want them to withdraw from public life and stop advocating for human rights.

Violent extremists in Bangladesh have been responsible for a spate of attacks against outspoken critics and bloggers. In January 2013, Asif Mohiuddin, a self-described “militant atheist” blogger, was stabbed near his office in Dhaka. Mohiuddin, a winner of a prominent award for online activism, was on an Islamist hit list because of his opposition to religious extremism. In another harrowing case in February of 2014, bio-engineer Dr. Avijit Roy and his wife Bonya Ahmed were attacked in Dhaka by machete-wielding assailants. Roy was a founder of the influential Bangladeshi blog Mukto-Mona ("Freethinkers") and a champion of liberal values and secularism. 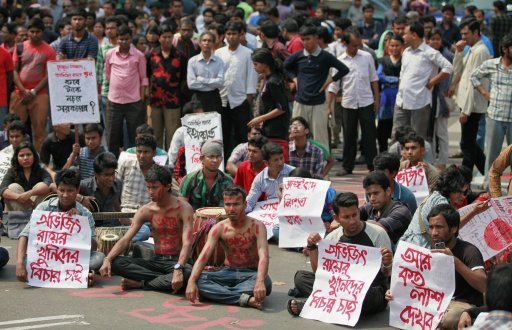 Students and activists protest the brutal killing of Avijit Roy in Dhaka, Bangladesh.

Finally, in Colombia, the increasing strength of neo-paramilitary groups, collectively known as BACRIM, (short for bandas criminales or “criminal gangs”) has caused an uptick in violence against landowners’ rights and indigenous peoples’ rights activists, trade unionists and journalists. By January 2013, the Urabeños, a splinter group of BACRIM, had killed at least 18 students, blue collar workers and indigenous peoples and had threatened several prominent trade union leaders with death.

For large swaths of the globe, the threat of violence emanating from armed non-state actors, criminal networks and violent extremists is having a chilling effect on civil society. Human rights activists think twice before speaking out about abuses committed by these groups or advancing ideas that might attract unwanted attention. Journalists and bloggers mince their words or avoid inflammatory topics altogether. And development and humanitarian organizations resign themselves to staying out of “no-go” areas, where their support is desperately needed but their lives are threatened. As a result of the ongoing attacks on human rights defenders and the total impunity for such acts, for instance, the United Nations has concluded that: “Libyans’ enjoyment of freedom of expression and association following the former regime’s fall in 2011 has been cut short, and the growth of Libya’s nascent civil society has been stunted.”

The presence of armed non-state actors is both a response to and driver of government assaults and stigmatization of civil society.

The presence of armed non-state actors, criminal gangs, or violent extremists is both a response to and driver of government assaults and stigmatization of civil society. Governments have created an environment conducive to such violence by vilifying civil society, labeling organizations as “foreign agents,” “undesirables,” or “evil society,” and committing (or at least allowing) physical attacks on activists. Conversely, the violence perpetrated by armed actors provides cover for government officials seeking to target activists with any connections—real or fabricated—to criminal activity or violence.

Governments suspect collusion and take their own action against activists or journalists who are in contact with these groups. For example, in June 2011, Urinboy Usmonov, a reporter for the BBC World’s Uzbek service, was arrested in Tajikistan and convicted of “extremism” after meeting with members of the banned Islamist group Hizb-ut-Tahrir. In April 2015, the Kenyan government, citing suspicions of corroboration with the terrorist group Al-Shabaab, froze the bank accounts of HAKI Africa and Muslims for Human Rights (MUHURI), internationally-respected human rights organizations that advocate for constitutional means for countering terrorism. These examples send a clear message to human rights activists and reporters working on sensitive issues or stories—stay silent or face the repercussions.

More research is needed on the impact of armed non-state actors, criminal networks, and violent extremists on the enabling environment for civil society, and how to deal with this dimension of closing space. In the meantime, including these groups in the debate around closing space leads to a few conclusions: 1) the international community should condemn all efforts to undermine freedoms of association, assembly and expression, regardless of whether a state or non-state actor is responsible; 2) the international community should call on countries where these abuses are common to uphold their human rights obligations and bring perpetrators to justice; 3) states should lower the rhetorical temperature fueling these attacks by ceasing to disparage civil society; and 4) governments should enhance protections for CSOs, including by ensuring that law enforcement officials are properly trained on their human rights commitments. Addressing the crackdown against civil society—that is being driven by governments and armed actors alike—is critical to preserving what space remains for human rights defenders, journalists, and CSOs in the most dangerous and oppressive environments.