Once immediate policies have minimized Trump Stink, what are the implications for the US’ long-term identity?

By: Kurt Mills & Rodger A. Payne 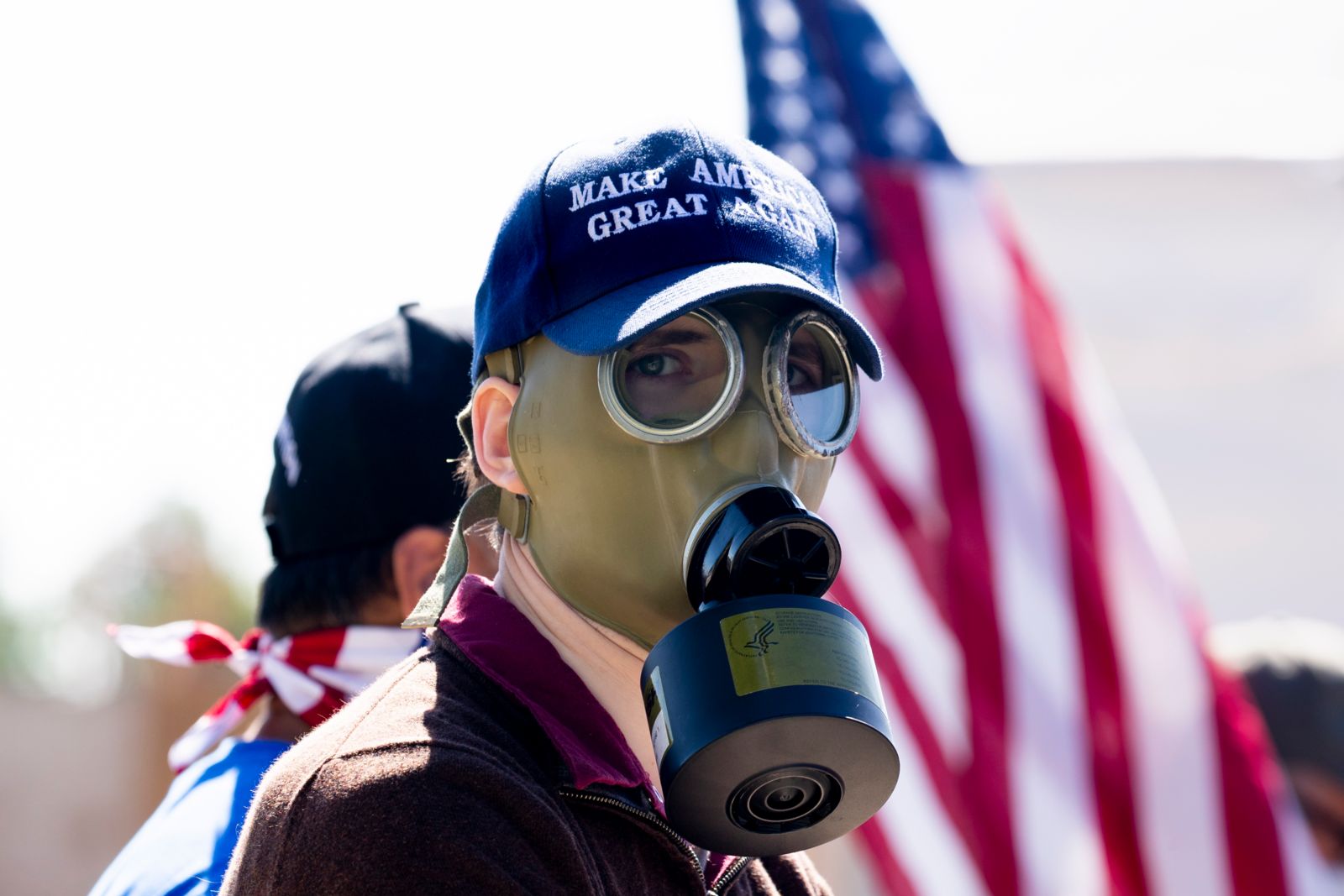 A supporter of US President Donald J. Trump wears a 'Make America Great Again' hat and a gas mask while gathering with Trump supporters wishing him well outside Walter Reed National Military Medical Center, where Trump received treatment after testing positive for Covid, in Bethesda, Maryland, in October 2020.

Various political analysts in the United States have repeatedly used the pejorative phrase “Trump Stink” to describe the opprobrium attached to individuals who worked in Donald Trump’s administration or who otherwise helped him during his term. Their credibility has been destroyed and they are now scrambling to put distance between themselves and the former President.

Yet, this Trump Stink does not attach only to individuals. It has also affected perceptions of the United States more generally as Trump’s America First policy dramatically violated international norms around multilateralism. In a recent research article, we argued that Trump undermined human rights norms in an intentionally performative manner, which had both intended and unintended consequences on US national identity. Specifically, Trump’s words and deeds put at risk the global understanding of the US as a member in “good standing of international society.” In other words, the reputation of the US was tainted with Trump Stink.

Now that Trump is out of office, we ask: can the US wash off the odor?

Trump’s attacks on human rights are summarized here, but included: advocating the use of torture; pardoning US service members convicted of war crimes; severely restricting immigration and locking migrant children in cages; withdrawing from the UN Human Rights Council; imposing vindictive economic sanctions and visa restrictions on International Criminal Court personnel; venerating an array of autocrats and tyrannical regimes and emulating their behavior; attacking women’s and LGBT rights; continuing to support Saudi Arabia after Washington Post journalist Jamal Khashoggi was murdered in a Saudi consulate in Istanbul; and creating the Commission on Unalienable Rights under Secretary of State Mike Pompeo, which argued for a very narrow understanding of human rights, which flew in the face of the broad international human rights regime that the US helped to construct.

Now that Trump is out of office, we ask: can the US wash off the odor?

Most of these actions sent the very clear and disturbing message that the US rejected core human rights norms as well as broader norms around multilateralism. International perceptions of US identity – and its reputation – changed dramatically for the worse, as demonstrated by various global opinion polls. And in the wake of the George Floyd killing, the International Crisis Group took the unprecedented step of publishing a statement which described “unrest” in the country and called on the Trump administration to stop using “incendiary rhetoric.” This is language usually reserved for regimes viewed as outlaws.

Over the years, the US has demonstrated significant hypocrisy by portraying itself at the fount of democracy and human rights, while all too often violating human rights norms and exempting itself from international normative frameworks and institutions. Yet, Trump’s actions took the US to a very dark place that far exceeded the usual hypocrisy embedded within the US foreign policy establishment consensus.

The election of Joe Biden was heralded by many as a return to normality and sanity in US foreign policy, a repudiation of America First, and a reassertion of multilateral engagement. In fact, Biden has stated that ‘America is back’ in a rebuke to America First, and his Secretary of State John Blinken has repeated this phrase. Biden and his team have acted quickly to reverse many of Trump’s actions which undermined human rights, including: reaffirming the US’ condemnation of torture, revoking the Muslim ban, submitting a bill to reform immigration policy, announcing that the US would reengage with the Human Rights Council and run for a seat in 2022, reaffirming a commitment to women’s and LGBT rights, castigating Russia and China for human rights abuses, and repudiating the Commission on Unalienable Rights.

These policy reversals were very public and clearly intended to indicate a sharp break from America First human rights policies. The Biden administration also moved quickly to rejoin the Paris Climate Agreement and the World Health Organization, and declared that allied partnerships are not transactional and pledged to rebuild partnerships and regain the US’ seat at the global table.

So “America is back,” as Biden has triumphantly proclaimed, but the devil may well be in the details – and the omissions. The administration has announced that it will not move the US Embassy from Jerusalem, putting the US at odds with its allies. It has wavered in its commitment to reverse Trump’s draconian limits on refugee admittance. And while the administration did eventually withdraw the ICC sanctions, it dragged its feet, raising significant questions about why it did not act quicker. We know that Israeli Prime Minister Netanyahu put pressure on Biden not to reverse the sanctions given the ICC investigation in Palestine, and Secretary of State Antony Blinken has explicitly criticized the Palestinian investigation. Yet, to much of the world, this foot dragging  indicates the kind of US exceptionalism and exemptionalism that has characterized the US foreign policy establishment consensus for decades, and in particular its conflicted relationship with the ICC.

The US has also failed to respond quickly to violent attacks in Gaza which have been labeled as war crimes, including blocking UN Security Council resolutions calling for a cease-fire. And, while blaming Saudi Crown Prince Mohammed bin Salman for approving the killing of Khashoggi, it has failed to take any action directly against him.

Further, even with all of the reversals and a reassertion of the US presence on the world stage, even some close allies remain skeptical. French President Macron recently asserted the idea of ‘strategic autonomy’ from the US, cautioning against being overly dependent on the US. And German Chancellor Merkel warned that US and German interests would not always converge.

By altering US policy, the Biden administration has clearly attempted to shed the country’s deviant image. And by saying ‘America is back,’ it is sending a clear message that it intends to be part of international society.

If policies can change so quickly, what are the implications for the US’ long-term identity?

At the same time, though, there will be other concerns that will potentially influence global perception of the US, such as the continued prominence of white supremacist groups and the violent police response to the Black Lives Matter movement. The conviction of Derek Chauvin from George Floyd’s murder is a positive step, but does not fundamentally change the wider inequality in US society. Trump is trying to remain relevant, and the Republican Party has hitched its wagon to him in a ‘venomous panic attack.’ The stigma associated with Trump will thus linger, but Biden’s sweeping change in approach in most areas may help to reduce the stench to a background odor.

Yet, these are early days in the effort to minimize Trump Stink, and significant questions remain. In particular, if policies can change so quickly, what are the implications for the US’ long-term identity?

A certain level of hypocrisy has long been accepted as part of the US foreign policy psyche, but the hypocrisy might become unsustainable and thereby continue to taint international relationships. Under Biden the US has repudiated many of its normative transgressions and has pulled back from the brink –the US is no longer beyond the pale as an international actor. The dramatic reversals of the past few years certainly challenge the idea that the US can provide stable global leadership. It is too soon to know whether the world is ready to accept that Trump was a once-in-a-lifetime aberration – or whether he reflected something deeper in the US that cannot easily be washed away.

Rodger A. Payne is a professor of political science at the University of Louisville. His current work focuses on two major projects: (1) "America First" and multilateral relations and (2) the value of comedic and satirical narratives in world politics.

By: Mine Yildirim
Español | العربية