Egypt is considering tougher sentences and stiffer fines for doctors and parents who perform female genital mutilation on their daughters. But will that change anything?

This past month, a doctor who is both a member of the Egyptian parliament and a member of its health committee stated that, “leaving women uncircumcised is unhealthy”.

These shocking words came during discussions of the female genital mutilation (FGM) law amendments presented by the National Council for Population (NPC) to the People’s Assembly—the lower house of Egypt’s parliament. The suggested amendments include increasing the imprisonment sentences and fines—under Article 246 of the Egyptian Penal Code, FGM is punishable with a minimum of three months to a maximum of two years in prison, and a maximum fine of LE 5,000. The NPC proposal came as a reaction to the recent death of a young girl, Mayar Mohamed Mousa, while undergoing FGM by a medical doctor at one of the hospitals in the Al-Suez governorate. The tragedy received widespread national and international media attention, but this is not the first time a young girl has bled to death as a consequence of FGM. In June 2013, a 13-year-old girl, Soheir El Bataa, died while undergoing circumcision also performed by a medical doctor in a private clinic. In a country where more than 65% of the girls between the ages of 15-17 are circumcised, countless girls have either died or have suffered from permanent disabilities as result of performing FGM. But because families do not usually report these cases, statistics are hard to verify and perpetrators are not punished.

The original 2008 law and ministerial decree on FGM were issued in response to the death of Bodor Ahmed Shake’r, from Minya governorate, who died after undergoing FGM in a private clinic in June 2007. The state’s inability or unwillingness to uphold the law is reflected in the fact that only one case has been pursued since the 2008 law came into place. Raslan Fadl, the medical doctor who performed FGM on Soheir El Bataa, is the only doctor who has been prosecuted so far. The first court in Daqahlia acquitted both the doctor and the victim’s father of involuntary manslaughter, which sparked an international outrage and pushed the state to appeal. After the appeal, Fadl was sentenced to two years in jail for involuntary manslaughter, and issued an additional three-month sentence for illegally performing FGM. He was also fined LE 500.

Despite the overall failure of the state to enforce the current FGM laws and persecute perpetrators of FGM, NPC’s proposed amendments include increasing the punishment of performing, or assisting in performing, FGM to a minimum of 2 years in prison and a maximum 3 years, with a minimum fine of 10,000 LE and a maximum of 50,000 LE. The amendments also include more serious penalties (minimum of 3 years and maximum of 15 years) in cases of permanent disability and 25 years in case of death. 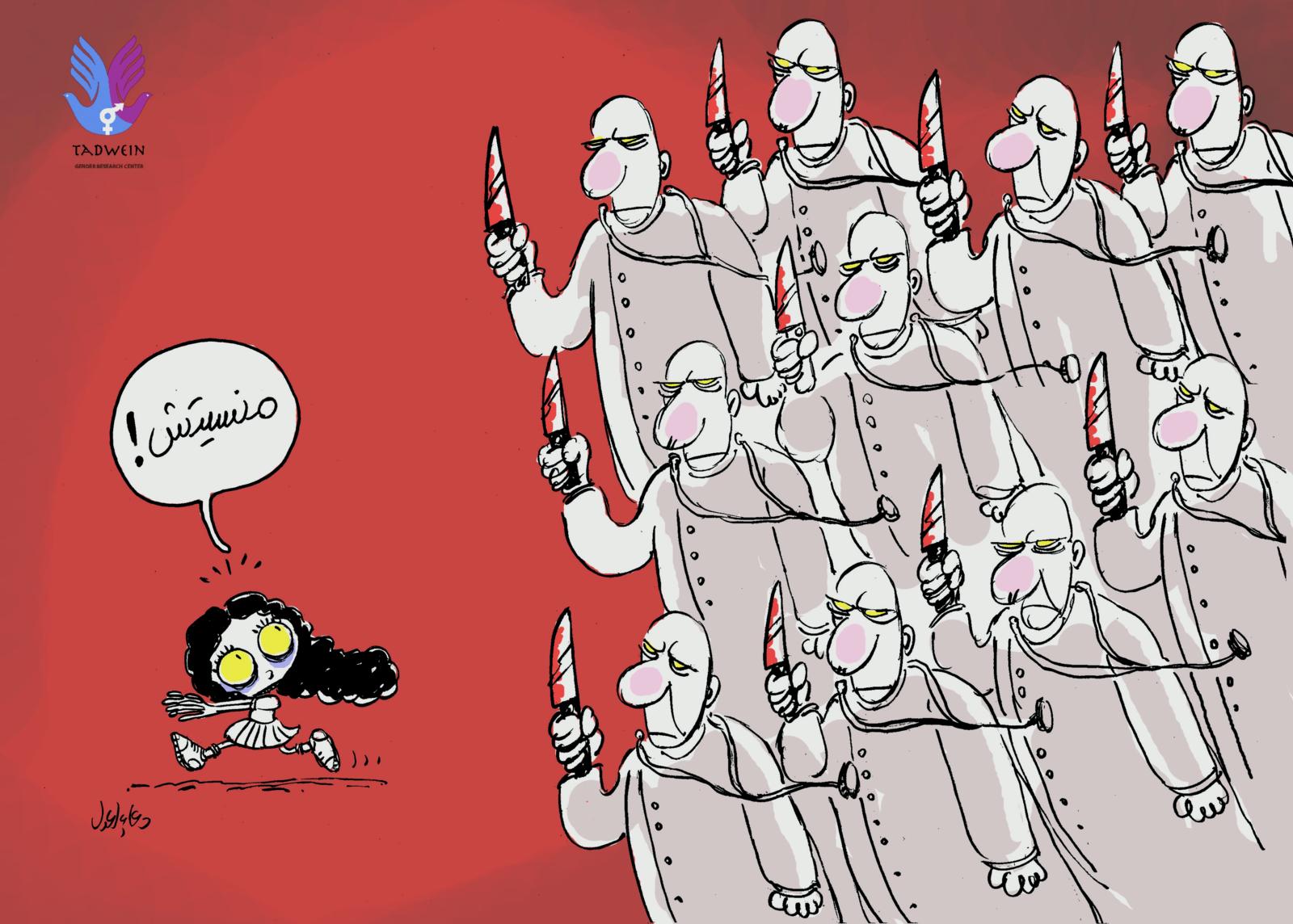 A Tadwein cartoon portrays a young girl running from doctors performing FGM as she states, "I did not forget."

However, these proposed harsher sentences likely will not help in prosecuting more medical personnel, or in deterring parents from circumcising their daughters. Instead, the stricter measures will probably lead more often to FGM being performed “underground”. Furthermore, the amendments aim to penalize the parents of circumcised girls, which will probably discourage people from reporting incidents of FGM.

The work on FGM needs to be situated within a wider framework of rights.

So far, the state has not only failed to properly create and utilize measurement to legally enforce the FGM law, but it has failed to create a wide societal debate on FGM that discusses social, cultural, and sexual perspectives. The state’s campaigns have mainly addressed FGM from either a religious or medical perspective, as a way to deliver conservative and non-confrontational discourse on FGM. In Egypt, FGM is widely practiced to control women’s sexual desire and protect what is known as her “honor”, but the state institutions working on FGM shy away from addressing issues like sexual pleasure or promiscuity and its linkages to men’s “honor” and masculinity. The work on FGM needs to be situated within a wider framework of rights and the practice understood  as a violation of  women’s sexual rights. We must challenge FGM by asserting a woman’s right to a healthy sexual life and of control over her own body.

Using health and religion as the main pillars against FGM in Egypt takes away women and young girls’ agency to create change. The recent TV interview with Egyptian parliamentarian Ahmed Al-Tahawy, is a clear example: he stated that the government needs “to have a specialist doctor and religious leaders to tell us whether or not to continue with FGM”. He seems to have forgotten that Egypt has signed several international treaties condemning the practice of FGM, issued a law banning the practice in Egypt, and has recently released a national anti-FGM strategy where the state commit itself to 10% drop in 5 years.

The state’s unsuccessful attempts in shaping a convincing and consistent anti-FGM discourse have massively contributed to the inability of the state to stop or even tangibly decrease FGM. Current statistics show that 92% of ever-married women between the ages of 14-49 years have undergone FGM. Between 1994-2014, there was only a drop of less than 5% in the overall prevalence rate of ever-married women. In addition, according to 58% of Egyptian women and 50% of Egyptian men support the continuation of the practice, (EDHS 2014). Perhaps even more alarming, according to the recent Survey of Young People in Egypt (SYPE), 70.7% of young females and 68.6% of young males surveyed intended to circumcise their future daughter(s). The majority of the girls in Egypt (75%) are circumcised between 9-12 years old, with 14% having the procedure before the age of seven. More than 70% of cases are performed by medical personnel.

The NPC needs to reconsider amendments that threaten parents with imprisonment, as this will force people to be secretive about FGM in fear of prosecution. Instead, the Egyptian state needs to develop a strong and consistent anti-FGM discourse and create a societal debate around it, where FGM is widely addressed from a rights perspective. The anti-FGM programmes implemented by the state should adopt a bottom-up approach in its design and implementation by involving more youth and local NGOs. Finally, employing a wide discussion on sexuality in relationship to FGM will have a major impact on the discontinuation of the practice.

Amel Fahmy is the managing director of Tadwein Gender Research Center in Egypt www.tadwein.com  and co-founder of HarassMap. She has worked on gender-base violence with the World Health Organization and the United Nations Population Fund.