The failure of the UNSC to explicitly guarantee women’s rights to sexual and reproductive health reinforces a patriarchal governance system that is inherently harmful to women. 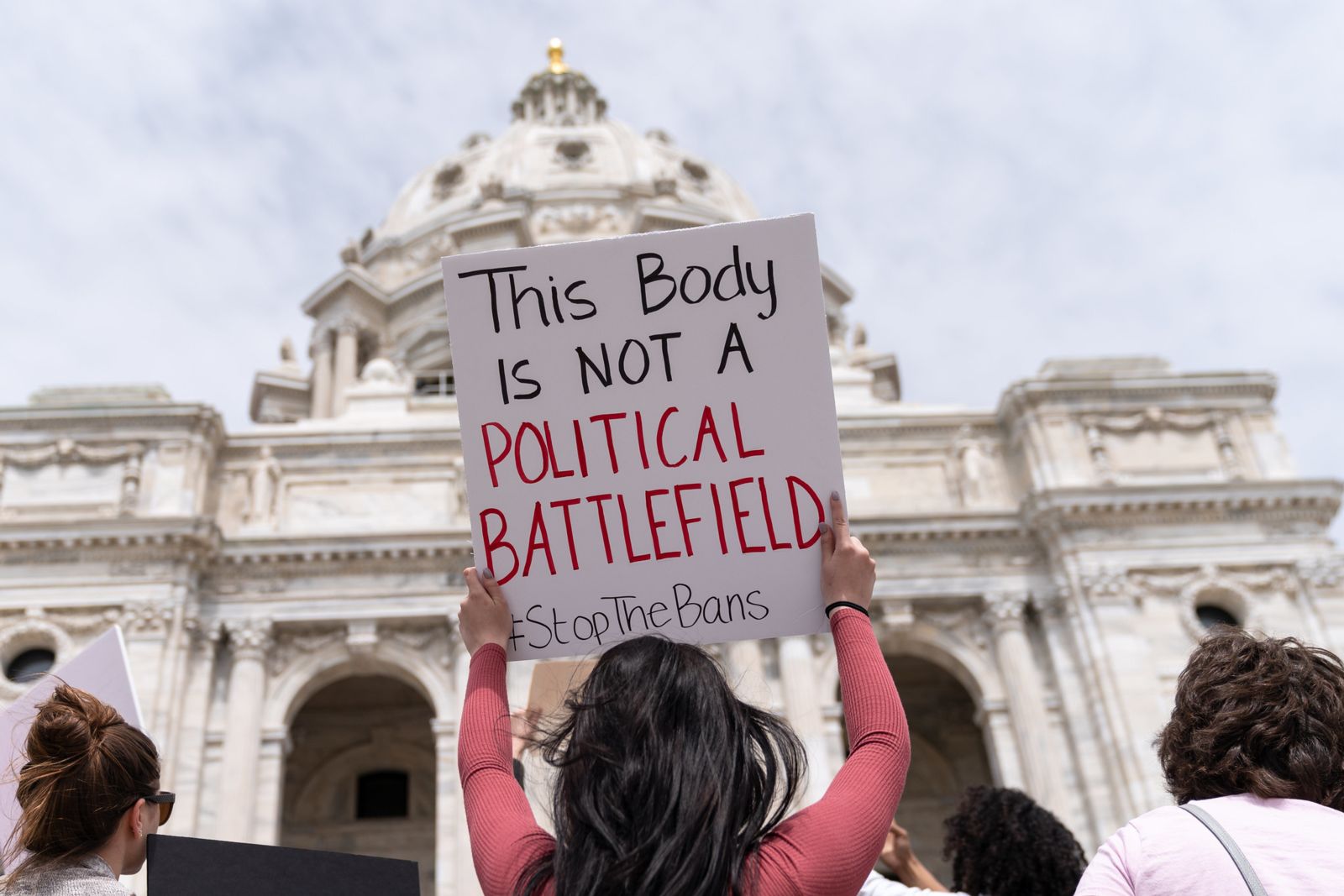 "This body in not a political battlefield sign" at a Stop Abortion Bans Rally in St Paul, Minnesota in May 2019 where state legislature tried and failed to pass abortion restrictions.

The recognition of women’s human right to sexual and reproductive health has been a long and complex process, and after years of feminist groups’ struggles, this right still encounters several obstacles in being included in binding legal instruments and/or resolutions of the United Nations Security Council (UNSC). This right is also rarely recognised in intergovernmental “patriarchal” settings, which perpetuate historically unequal power relations between women and men. Not only are the words “right to sexual and reproductive health” (not mere status) difficult to use—because they imply a clear recognition of the justiciability of the right—but the expression “access to sexual and reproductive services” is as well.

One year ago, on 23 April 2019, the UNSC adopted Resolution No. 2467 (2019) within the framework of the Women, Peace and Security (WPS) Agenda. At the time of the adoption, the UNSC was composed of 15 men and 0 women. A key paragraph on access to sexual and reproductive health was watered down upon political pressure in order to avoid the US veto, which would have impaired the adoption of the Resolution itself. The Resolution, which falls under Chapter VI UN Charter, has divided scholars and activists, ranging from criticism to appreciation of its positive aspects. Even though the Resolution registered some important steps forward—including the recognition of the rights of children born of conflict-related sexual violence, a survivor-centred approach, the repetition of elements of the WPS Agenda that constitute binding legal obligations, and acknowledging the continuum of violence—access to sexual and reproductive health was willingly excluded from the final text, both from the preamble and from the operative paragraphs.

Why is it so relevant to recognise this right in the WPS Agenda? Why do states show this reluctance, if this right has been confirmed by UN treaty bodies and in the reports of the UN Secretary General (SG)? Would states finance a programme for—say—access to abortion services based on Resolution No. 2467 as it is written today?

At the UN level, reproductive rights are not only a component of the right to health, but also a major health topic of global concern and a human rights issue. The right to health, as originally conceived in human rights legal instruments, reflects a male-oriented conception of health, where issues related to reproductive health are absent (see, in that respect, among others, Putman, Cook, Doyal, Sherwin, Leary, and recently Nelson).

The right to health, as originally conceived in human rights legal instruments, reflects a male-oriented conception of health, where issues related to reproductive health are absent.

When it comes to independent experts (e.g., the latest report of the UN SG) or to bodies that promote an evolutive interpretation of existing law (see Alyne da Silva Pimentel Teixeira v. Brazil, CEDAW Committee, as an example), the outcome is in favour of the recognition of this right, “gendering” the more general right to health. It means, in other words, to acknowledge women’s control over their reproductive functions, contributing to the disruption of structural inequalities present in societies (see Siegel).

However, when it comes to intergovernmental action, this recognition is far from being achieved. The Council of Europe Istanbul Convention on preventing and combating violence against women and domestic violence, for example, contemplates “health” in one provision only—regarding compensation. The UN General Assembly, approving a Resolution on global health in December 2019, struggled to include a reference to sexual and reproductive rights. Only by separate votes—with eight countries voting against—could it reaffirm its commitment to ensure universal access to sexual and reproductive health rights.

To return to the UNSC, it combines two elements: on the one hand, the promotion of security, mainly meant as military security; on the other hand, a rigorous intergovernmental and unequal structure. The voluntary absence of a reference to access (and even more importantly to the right) to sexual and reproductive healthcare, can constitute a form of violence against women’s health through laws (e.g., through UNSC law), that impede women’s rights and autonomy. The UNSC mirrors a patriarchal structure of the society, characterised by fixed gender power structures that have been reproduced over the years after the Second World War.

This is crystal clear in some provisions of Resolution No. 2467(2019). It is a huge step forward that this Resolution refers to the “non-discriminatory access to services such as medical and psychological care”, to the risks of HIV as a consequence of violence, to the “reparation programmes including health care.” Nonetheless, merely referring to the “right to health” is not enough, because of the traditional male-oriented approach to medicine and health. As scholars have argued: “because women are women, they are subject to social dysfunctions that impact on their physical, mental, or social health.” The absence of a right to sexual and reproductive health, to paraphrase Charlotte Bunch, shows the resistance to laws and social changes “that put control of women’s bodies in women’s hands: reproductive rights, freedom of sexuality whether heterosexual or lesbian, laws that criminalize rape in marriage, etc.”

Even though the Resolution registered some important steps forward, access to sexual and reproductive health was willingly excluded from the final text, both from the preamble and from the operative paragraphs.

The inclusion of the right to sexual and reproductive healthwould have been fundamental in order to stress not only that this right is violated before, during and after conflict, but also to recognise women’s agency expressed as sexual and reproductive autonomy and as justiciability of the right in front of domestic and regional human rights courts. It would have meant, among others, to clearly ensure the right to fistula operations, to ongoing monitoring, and to access to abortion and post-abortion care.

The future of the WPS Agenda depends not only on the political will of the Members of the SC, but also on the activity and actions undertaken outside this framework within the UN (UN SG, CEDAW, other UN-treaty bodies, the Special Representative on conflict-related sexual violence) and on the work of non-governmental organisations, women’s groups, and academia.

It took years to acknowledge sexual violence as an international crime and to include it in the Statute of the International Criminal Court, and probably time will come in which we will see the recognition of the right (not access, not status, but the right) to sexual and reproductive health in a UNSC Resolution. This would support the implementation of the Women, Peace and Security agenda, both in terms of financed programmes in situation of conflicts or post-conflict settings, and in terms of justiciability in order to enable survivors to ask for reparations as a consequence of the lack of access to adequate reproductive health services.