A movement that started as a simple hashtag, declaring that #GambiaHasDecided, is bringing a fresh wave of optimism and hope to political turmoil in the Gambia. 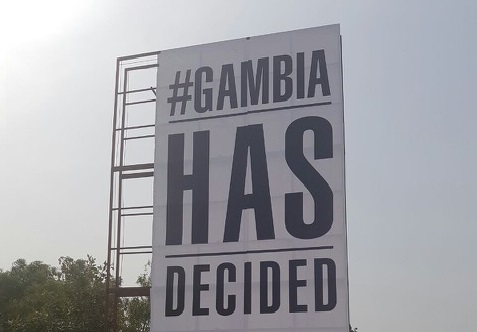 The wind of change finally found its way to the smiling coast of Africa. On Dec 1st 2016, the unthinkable happened: Gambians peacefully voted out a 22-year-old dictatorship and the incumbent president, Yahya Jammeh, surprisingly accepted the result of the election after decades of systematically violating our fundamental rights.

Benjamin Franklin once said, "He that lives on hope will die fasting". But for those of us living in Africa, hope has been our oxygen for over two decades. Indeed, the #GambiaHasDecided movement was inspired by the hope and courage mustered by Gambians determined to peacefully stand up against Jammeh’s unconstitutional attempt to retain power after the people voted for change.

After the election results declared Adama Barrow, the opposition coalition candidate, as the winner, Gambians from all walks of life celebrated with much excitement for a New Gambia. However, the jubilation was short lived. A week after accepting the election result, the incumbent president rejected the outcome in a televised broadcast and shocked the population by retracting his earlier concession. Jammeh quickly started consolidating his power and placed soldiers in every strategic location of the country in full combat gear. It was clear that he had no intention of handing over power to the democratically elected president, and the country was plunged into a political crisis.

Many international and local organizations issued swift statements condemning Jammeh’s actions as unconstitutional. ECOWAS, the sub-regional body of West Africa, deployed a mediation team headed by President Buhari to convince Jammeh to step down, to no avail. Meanwhile, the lack of progress from the ongoing mediation efforts—coupled with the absence of any communication or information about the state of affairs—was increasingly agitating the population.

The #GambiaHasDecided story started with a conversation I had with a young Gambian woman called Asta Jobe, who like many Gambians was frustrated, angry and anxious about the political turmoil. I brought Asta and other concerned young Gambians together to brainstorm over how to salvage our country from reverting to a dictatorship. From this session, we conceptualized and launched the hashtag #GambiaHasDecided, which we released through all social media platforms and disseminated it in our instant messenger groups such as Whatsapp and Viber.

From the onset, our goal was to ensure the decision of the Gambian citizenry was upheld and respected by the outgoing president. We knew there was a looming political impasse that could easily degenerate into civil disobedience and violence. We believed a concerted and persistent message of peaceful defiance would undermine the authority of the incumbent president. Furthermore, it was important to deflect the anger amongst the youth to a positive cause with which they could identify.

The hashtag took on a life of its own. It was by design simple, apt and resonated positively with Gambians within the country as well as the diaspora.  The message was that #GambiaHasDecided for peace, democracy, rule of law unity and justice. The language of our messages on all our platforms was consistently positive and designed to uplift the population from the state of misery and hopelessness. We consciously refrained from using negative or harsh language even when security forces loyal to Jammeh were destroying our billboards. Our policy was that for every billboard that was brought down by the security forces, we replaced it by one or even two. It became difficult for the security forces to keep up with us, and to make it worse for them, young people starting spray painting the hashtag all over the place. People wearing GambiaHasDecided T-shirts were initially arrested, but eventually state agents could not arrest the thousands of Gambians who were defiantly wearing the shirts.

This movement operated like a start-up incubated by people with hardly any experience in activism. But we had different skill sets, experience, and capacities from different fields. The founding members included a lawyer, an economist, a project management expert, an accountant, an IT expert, a marketing professional, a music promoter, a start-up entrepreneur and even a post-doctoral cancer researcher. The team managed the process from the conceptualization to implementation in a very business-like and professional manner. For instance, we identified our goals as deliverables and divided ourselves into different thematic groups, each with a defined responsibility of contributing towards our goal within a specified time frame. We came up with a multi-pronged strategy that enabled us to create impact incrementally, by deploying the hashtag in different media to build up and sustain momentum of the citizens’ engagement.

We started by randomly changing our profile pictures and statuses on all our social media accounts to the GHD logo. Once the hashtag went viral, we started distributing thousands of T-shirts for free to the public and then erected multiple billboards in strategic areas in the country. At inception, each of the founder members pledged funds to finance the activities of the movement and thereafter targets were set for each member to raise from their respective networks of friends, family and associates. As the hashtag became increasingly popular, the demand for the GambiaHasDecided T-shirt exploded. Our personal funds could no longer fund the movement, so we scaled up our fundraising efforts by directly soliciting donations from a cross-section of Gambians within the country and in the diaspora.

The final and perhaps most effective tool we used was the Open Mic Festival (OMF). The OMF, an annual musical festival that showcase the performance of Gambian artists, is one of the most popular and well attended music shows in the country with over 10,000 attendees and mostly youth. We combined multiple communication channels both online and offline to spread our message to the public to create maximum impact. Overnight, #GambiaHasDecided became the most visible Gambian brand and a symbol of hope for a New Gambia.

After the Open Mic Festival, I had to flee to Senegal with another of our movement’s co-founders, Raffie Diab, in order to escape arrest by state intelligence agents. This action—a warning to the other members and to the public—initially slowed the tempo of the group. Our members had to operate underground distributing T-shirts without being detected by security operatives. Meanwhile, Raffie and I continued our activism in Dakar by working online.

Today, Gambia is a democracy and the citizens—including a proliferation of civil society organizations—are no longer afraid to speak truth to power. Our nascent democracy now faces the challenge of managing the expectations of a predominantly youthful population grappling with their newfound rights and a novice government maintaining order in a democratic space.

This experience demonstrates that a determined, united and committed group of young people  can provide inspiration and leadership in political crises. One of the critical success factors of our movement was having a committed and professional team that was selfless and tactical in its approach. Indeed, picking the right team to coordinate a movement is critical. It takes more than passion to create impact.

To many, our movement is about the t-shirts or a hashtag, and to others it is about the iconic billboards. #GambiaHasDecided was a platform that helped amplify the voice of the Gambians during the political impasse and was the catalyst that helped in restoration of our democracy. The success of this movement left an indelible mark in Gambia’s political history and has spawned a culture of activism amongst the youth, who truly are the vanguard of the movement.

Salieu Taal is the initiator and one of the co-founders of #GambiaHasDecided, a movement which played a catalytic role in ousting a 22 year old dictatorship in the Gambia. He is a passionate fighter and promoter of Human Rights, Constitutionalism and Rule of Law in the Gambia particularly amongst the youths.