For Amnesty’s India office, raising local funds is all about membership

Amnesty International’s India hub focuses most of its fundraising efforts on domestic contributions, facing challenges as diverse as the weather to brand recognition

As Seema Guha noted earlier in this debate, NGOs in India have been put on notice, and we all have to be more careful—and creative—about our funding sources. As such, Amnesty International India is developing and hoping to expand its local fundraising strategy,

There are three parts to AI’s local funding strategy. The first two are raising money from charitable trusts and foundations, and from wealthy individuals. But the most important is the third part, where the majority of our staff work: face-to-face fundraising—what we refer to as “regular gifts”—is crucial to our operations.

Until March this year, this donor solicitation was done out of two of our offices, Bangalore and Chennai. This month, we have started operations in three additional cities—Pune, Mumbai and Hyderabad—for raising money through regular gifts. In this process, we stand on the street during office hours (including slightly before and slightly after). We stop individuals and talk to them about Amnesty International and our program of work in India. This conversation usually lasts about 15 minutes and also includes a run through of our seven active projects in India: under-trial detention, tribal rights in coal mining areas, and women’s right to report sexual violence, among others.

We have only been in India for about four years, and so not everyone has heard of the organization—Amnesty’s “brand recognition” is not particularly high. With that in mind, we work to familiarize people with our decades of work internationally in human rights, and our Nobel Peace Prize.

At the end of the conversation, we speak about how we are funded and ask if the individual would like to become a regular contributor. Those who want to sign up then fill out a form with bank details and choose a monthly sum—between Rs 400 and Rs 1000—that they wish to contribute. We established the minimum amount based on our experience in finding a sweet spot for the average Indian contributor, and our knowledge of the market rate (i.e., the donation threshold in other charities raising funds). Over a third of our regular gift donors are women, and this ratio is increasing over time. Besides being fundraising on streets, we also approach organizations, such as corporate companies, to allow us to set up a space inside their offices for a couple of days where we can sign up employees.

Sign-ups are linked directly to volunteer hours on the street.

This process of fundraising is hard work, and there are many challenges. The weather is one particular obstacle. The heat means that the number of hours we have available in many cities is limited (in the sweltering southern coastal city of Chennai, for instance, we start later and work into the late evening). The monsoon season means that some days of torrential rain in Mumbai are completely written off. This year, we lost an entire month because of the recent floods in Chennai, which brought the city to a standstill. This is important because sign-ups are linked directly to volunteer hours on the street.

The second is an unusual issue, and has to do with the fact that the rules require us to get individuals to fill out a form and then sign it. Banks often return the forms, citing a signature mismatch. This is resolvable but requires additional time, because the individual needs to be contacted in person yet again.

Third, hiring fundraisers in some cities is easier than in others. Though the language of our work is English, the nature of street conversations means that we must be fluent in the local language. A multi-city presence means that this affects how we relocate staff. 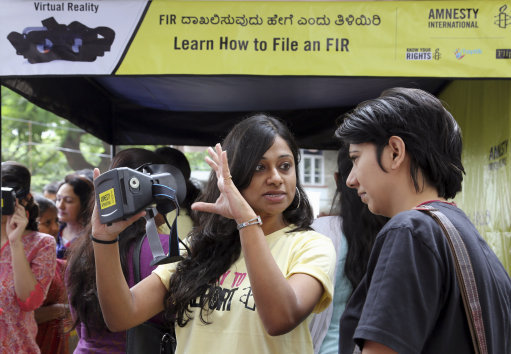 As part of their campaign in Bangalore, India, an Amnesty international official explains the use of a 'virtual reality instrument' that takes the user step by step through the process of reporting sexual violence at a local police station.

Finally, as mentioned earlier, the recognition of Amnesty in India is not as high as it might be in European nations, where the organization has been active since the 1960s. This is improving with time, but for now it means that we must be able to attract the individual to the “product” rather than the brand. It is our programs, rather than our name, which must attract the contributor.

Regular gifts are the way in which, the world over, many of the big charities raise most of their money. It is replicable in other cities and it makes the organization less dependent on large donations, whether from trusts and foundations or from wealthy individuals.

If done well, regular gifts can result in revenue that increases exponentially each year. For example, an organization might sign up 100 regular gift donors in 2015 and in 2016 it signs up another 100, but 20 from the previous year drop out. It ends 2016 with 180 donors. In 2017 that number is likely to be 240, and so on. This sort of exponential growth is difficult to achieve in the other two fundraising strategies.

In addition, trusts and foundations often earmark their funding, limiting their contribution to certain specific projects. A new Indian law on Corporate Social Responsibility, requiring all profitable companies above a certain size to donate 2% of their profit, has opened up another source for non-profits. However, the government restricts the areas where such money may be spent.

Individuals, on the other hand, tend to gravitate towards different things. Many want to see work done in particular areas, for example the condition of prisoners who are facing trial, or the sexual violence against women. Individual fundraising also brings an element of stability and predictability that makes it preferable to raising money from a smaller number of sources, such as trusts and wealthy individuals. The best part of individual fundraising is, in a way, not about finances at all. It brings together individuals who are invested in a common purpose: the creation of a rights respecting society. Amnesty International India is not a bureaucracy tasked with monitoring and calibrating the levels of human rights in India. We are a movement of Indian individuals, and we are open for membership.

Aakar Patel is the Executive Director of Amnesty International India.