Network interference and internet shutdowns in the Central-Asian country have become a staple method of stifling the free flow of information during politically sensitive moments. 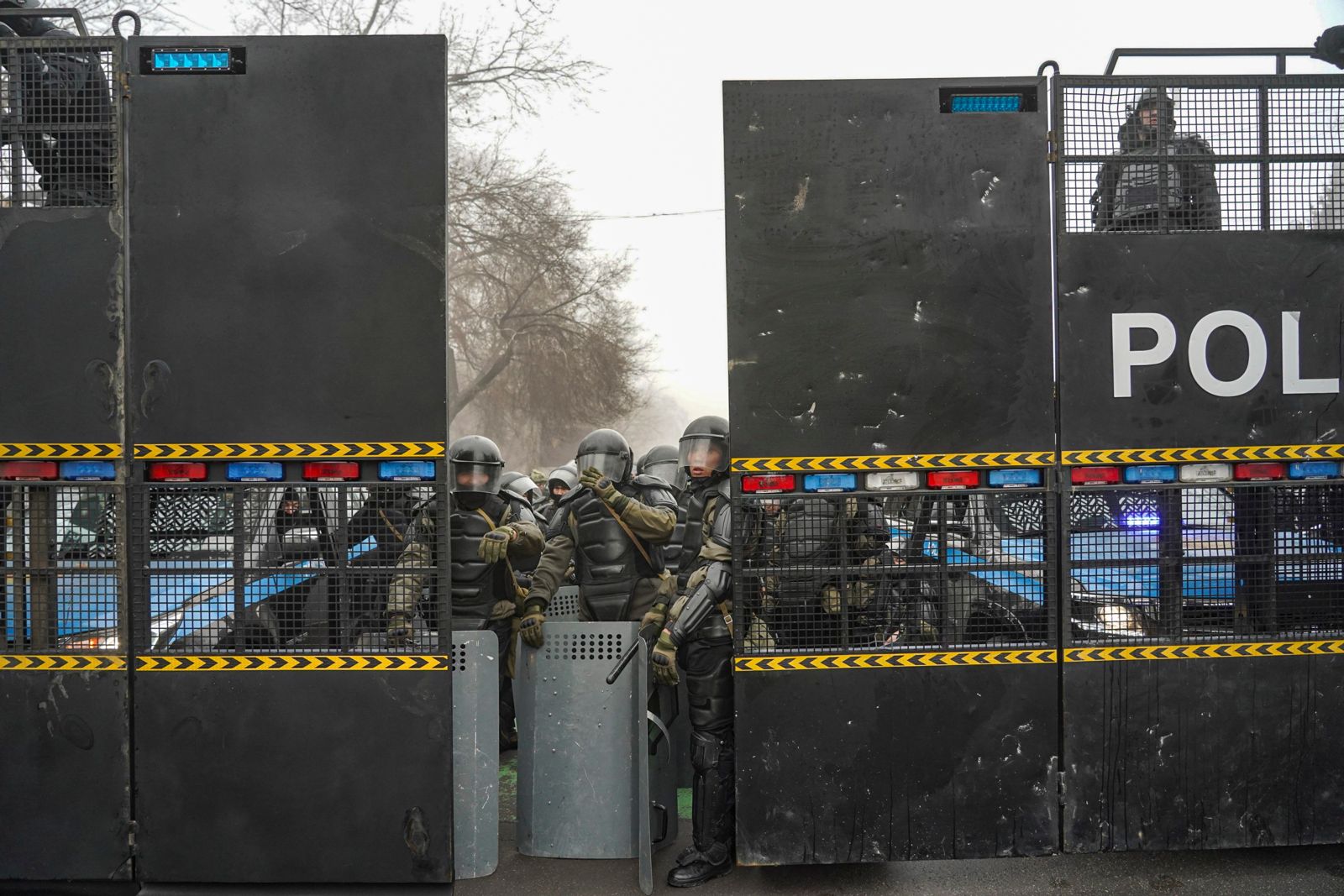 Kazakh policemen clash with armed people during protests over a hike in energy prices in Almaty, Kazakhstan, January 2022. As a result of the riots, 2,265 people in different regions of the country applied for medical assistance. 83 people are in serious condition in hospitals. EFE/EPA/STRINGER

When protesters took to the streets of Kazakhstan, the Central-Asian country’s government did not shy away from turning off the internet, throwing the nation into an information vacuum. This extensive and arbitrary control of information could come at a high cost, triggering a negative spiral effect where restrictions fuel discontent and result in even more repression.

In early January 2022, mass protests erupted in Kazakhstan after the government lifted a price cap on fuel, setting off a sudden and steep increase in the cost of liquefied petroleum gas. Crowds first filled the streets in the oil-producing city of Zhanaozen but demonstrations quickly spilled across the country.

The protests reflected popular discontent at the government and former President Nursultan Nazarbayev, who led Kazakhstan autocratically for three decades. Despite formally stepping down in 2019, Nazarbayev preserved a significant influence as the country’s ‘Leader of the Nation’ and chairman of the National Security Council.

Amid escalating protests, the authorities started to throttle the internet and impose targeted blocks. Virtual private networks (VPN) providers spoke of record demand from the country as people tried to circumvent the censorship. Then, the government resorted to cutting off both broadband and mobile internet access almost completely in an attempt to curb the unrest—causing a week of information chaos.

Internet blackouts helped the regime stifle the crowds at a decisive moment. Regulating information that spread across and outside of the country halted real-time reporting and organizing through online channels that could otherwise have triggered and enabled even larger gatherings.

By doing this, the Kazakh authorities scored a short-term victory compared to the post-election unrest in Belarus, where the deep package inspection (DPI) method was used to perform targeted inspection and blocking of online content. Some online channels were, however, operational, and Belarusians flocked to Telegram to access and share information on protest actions.

The government in Kazakhstan eventually decided to pull the plug entirely citing the provision of “anti-terrorist and public security”—a measure possible due to the state monopoly on telecommunication infrastructure.

The arbitrary control of information can come at a high future cost, resulting in citizens’ loss of remaining trust in the government pledge for a digitally empowered society. Internet shutdowns are a dangerous development because they undermine civil rights, such as freedom of assembly and expression, harm the security of people by creating an environment where fake news and misinformation spread easily, and lead to a long-lasting trauma for society.

Individuals lose access to critical information and services, including government services, educational institutions, banks and hospitals, and e-commerce. With cashless payments down and supply chains disrupted, the shutdown showed how the nation’s economy depends on digital means, and how willing the regime is to disregard this guarantee.

This extreme form of digital censorship is counter-productive at essentially every level—inflicting political, security, economic and humanitarian harm. Such measures may further induce a negative spiral, where a crackdown feeds  discontent which could incite the authorities to use more repression in the form of online traffic surveillance and censorship.

The arrival of social media sparked hope that these platforms would provide greater connectivity and create public online spaces for expressing views that could offset offline restrictions and government scrutiny.

Digitalization has also become an inextricable part of economic development. In Kazakhstan, programs such as Digital Kazakhstan promised to drive economic growth and improve the quality of life through the use of digital technologies. Until the January protests, the officials were cautious not to stain the country’s carefully curated picture as a stable and modern place for foreign investment.

This extreme form of digital censorship is counter-productive at essentially every level—inflicting political, security, economic and humanitarian harm

However, early warning signs were already there: restrictions on online space in Central Asia  intensified over the past decade, reflecting the governments’ priorities and intentions to digitize their economies while controlling the information through internet surveillance, censorship, blocking  and filtering.

In 2009, President Nazarbayev signed a law that recognized online resources, including websites, blogs and social media, as mass media, hence making restrictions to media outlets applicable to the online space. This way, it laid out grounds for large-scale content restrictions. Subsequent legislative revisions systematically obliged websites to register every internet user, either by SMS verification or digital signature, and equipped state agencies with means to identify people and disable online access on an individual basis.

Network interference and internet shutdowns have become a staple method of stifling the free flow of information during politically sensitive moments. In 2019, the year of the presidential election, AccessNow in its #KeepItOn report identified four internet shutdowns in Kazakhstan.

Around the election day, several online media outlets, as well as social media channels like Facebook, Instagram and YouTube, were not accessible. The list of restricted platforms became longer in the aftermath of protests evoked by the snap presidential election, when Facebook, Twitter, WhatsApp and Telegram all got blocked.  In spring 2020, as a response to the pandemic, the Kazakh authorities threatened criminal sanctions and investigations for spreading false information about the coronavirus, also targeting medical staff’s complaints about inadequate protective equipment.

Censorship intensified during the January 2021 parliamentary elections, when local internet disruptions were reported during protests, accompanied with distributed denial-of-service (DDoS) attacks and social media blocks. Now, the most recent crackdown has laid bare how equipped and determined the regime is to shatter the technologically enabled economic and social lives of its citizens, to remain in power.

As the dust settles on Kazakhstan’s unrest, President Kassym-Jomart Tokayev purged the country’s former security establishment. But the newly installed political elites may soon learn that approaching information security as an exclusive matter of national security—a mantra in the post-Soviet space—while disregarding its wider societal and economic impacts, can fall short of delivering the expected results in the digital age.

Institutional and policy reform is, however, unlikely to occur: refraining from instituting excessive information control legislative framework and practice would weaken the state’s censorship and surveillance means, lessening its ability to manipulate and deny societal change and suppress alternate political voices. Any progressive reform would present a fundamental challenge to the information control apparatus that holds the current establishment in power.