Incorporating religion into human rights: a bad idea for Egypt

Incorporating religion into human rights in Egypt would have disastrous effects, considering the intense and often violent discrimination against non-Muslims.

Many say that human rights activists should incorporate religion into their work, especially in deeply religious societies. In Egypt, however, nothing could be more dangerous. With approximately 90% of the population listed as Muslim, authorities continue to promote the notion of a religious state based on Islam. Where it used to be rare, there are now at least ten cases every year of Christians being prosecuted for contempt of Islam, often without proof—it is enough simply for one person to accuse another. Further, there are reports that some residents have prevented defense lawyers from attending court on these cases, and often officials do not stop these protests.

Egypt’s Christians, who make up between 10-20% of the population, are not the only ones targeted. Security forces have taken to tracking down and arresting suspected atheists, even though atheism is not a crime in the penal code. Bahá'ís in Egypt are not even able to list their religion on their ID cards, as Islamic Sharia law only recognizes Islam, Judaism and Christianity.

On the flip side, Islamic preacher Abu-Islam Ahmad Abdullah publically burned the Christian bible in front of the American embassy, and later repeated the action in court, but faced no repercussions. As long as you belong to the dominant religion, it seems that you can defame other religions as much as you want.

The violation of Egyptians’ citizenship rights is not limited to these incidents. Christians are prohibited from holding senior posts in the army, police, vital institutions and the Sovereign Ministries (e.g., Defense, Finance, Interior, Foreign Affairs) with the exception of the Ministry of Finance, which is headed by a Christian. Christians have some Honour Ministries (e.g., environment, culture), as well as the post of governor; however, while Christians can be university professors, they cannot be heads of universities. 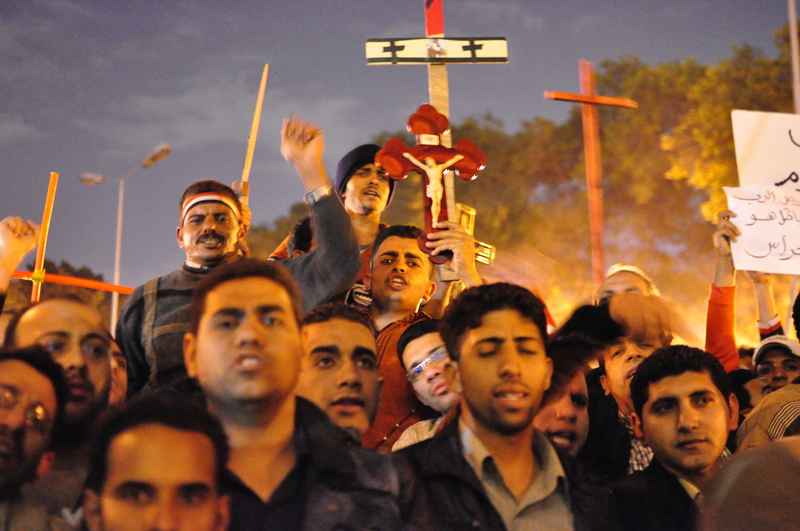 A Coptic Christian demonstration against religious violence in Cairo.

To address the increasing sectarian violence, religious leaders have created the so-called “Egyptian Family House”. This committee consists of representatives of Egyptian churches and others from Al-Azhar al-Sharif (the top Sunni Islamic institution based in Cairo), with the theory of bringing religions together to contain sectarian violence and calm religious conflicts.

But by establishing this committee, the government has further enhanced the concept of religious tribalism based on norms and traditions, rather than law: through this “Egyptian Family House”, the state seeks customary reconciliation gatherings to solve violent crises, including those that might have caused destruction of property or even multiple deaths. As a result, religious leaders are replacing law enforcement in mediating conflict. Thus there is rarely legal prosecution in these cases, and the weaker party is forced to acquiesce without compensation. While the idea behind the Family House is laudable, the fact remains that the justice system is not holding perpetrators to account. This has had the effect of increasing rather than decreasing tension.

Since a 1971 amendment to the Egyptian Constitution, Islam is now the official religion of the state. Therefore the real gap in rights occurs according to what religion citizens embrace, especially since religious doctrine is an important factor in government-issued documents. Most forms filled out by Egyptians, for example, include a checkbox for “religion”; check any box other than “Islam”, and you are essentially signing away many of your rights. If you are non-Muslim, you may be blocked from certain jobs or promotions, your paperwork may be delayed, or you may not be able to access some services. These are not formal discriminations written in law, but social conventions and traditions that continue to go unchallenged.

How, then, could rights activists in Egypt engage with religion in a constructive way?

Secularism is the only solution for states that are still crawling toward democracy. Otherwise, how will the rights of religious minorities be protected?

Until recently, minority groups in Egypt generally had no institutions or organizations to advocate for their rights. But four years ago, the Maspero Youth Union was established by a group of young men and women to defend the rights of Egyptian Copts—one of the country’s religious minority groups that often faces discrimination. The Union was formed after assailants planted a bomb at a church on the eve of 2010. Since the overthrow of Mubarak’s regime, the Union’s primary concern has become monitoring sectarian incidents, writing reports, trying to address the state and officials through the social media, and submitting reports to international organizations. However, these individual, one-off efforts have not really had any tangible results; since the Union is not recognized by the state, its role remains extremely limited. Until the state begins taking its reports more seriously, the Union is unlikely to have more of an impact.

Secularism is the only solution for states that are still crawling toward democracy. Otherwise, how will the rights of religious minorities be protected? Incorporating Islam into human rights efforts could mean that those believing in anything else may be at risk. What will happen to religious minorities and their rights? What about the atheists? Would the religious state guarantee their rights?

Linking human rights to religion would create too many loopholes for the state to protect only those rights of certain religious groups, and to ignore the rights of others.

What Egypt needs is more separation of religion and the state, not less.

Karoline Kamel is an Egypt-based reporter for Aswat Masriya, a division of Reuters. She writes on politics and sectarian issues in a number of media outlets.