To advance the polarized openGlobalRights debate on economic and social rights, we need more empirical research, and less ideology.

The debate on whether social and economic rights are “true” rights, and whether they should be constitutionalized alongside civil and political rights and equally enforced by courts (i.e., the justiciability issue), has raged for some time. I have followed the discussion with interest since earning a law degree in Sao Paulo, Brazil in 1993. I was in the country’s first cohort of law graduates to study under the post-dictatorship constitution of 1988, which included a long list of progressive social and economic rights.

In that constitution’s first decade, both legal scholars and the Brazilian courts deemed economic and social rights as “non-justiciable” norms (i.e. “programmatic norms”). In 2000, however, a landmark right-to-health case in Brazil’s highest court changed this position.

Ever since, Brazilian lawyers and judges have treated social rights as fully justiciable and immediately claimable entitlements. As a result, the country has witnessed an avalanche of lawsuits, ranging from the right to health to education, housing, social benefits, minimum wage and more.

Staunch supporters of social rights celebrate the Brazilian and similar Latin American cases, including Argentina, Colombia, and Costa Rica. In their view, these countries have made huge strides in the struggle for economic and social rights.

Firm opponents of these rights or of their judicial enforcement, however, see this trend as judicial usurpation of the democratic process’ legitimate role. Problems of economic and social entitlements, the critics say, must be dealt with inside the scope of the national or local legislature, not in the courts.

This polarized and often ideological debate shows no signs of abating, judging by exchanges in these pages, and elsewhere. It has been a sterile debate, however, because proponents tend to make abstract, rather than empirically supported, claims.

The debate on legalizing and judicializing social and economic rights must also focus on the actual empirical evidence, rather than on purely abstract and often ideological, normative arguments.

There is nothing intrinsically right or wrong with legalizing and judicializing social and economic rights; both can produce good or bad results, depending on context . As a result, the debate must also focus on the actual empirical evidence, rather than on purely abstract and often ideological, normative arguments.

People of good faith can of course disagree on how to measure the impact of legalization and judicialization. But this is where the debate should be heading among those who support social rights, even if they are sceptical about the legal approach. (With radical libertarians, of course, there is no point in debating).

Fortunately, many academics are beginning to try and measure impact. In these very pages, the contribution of Jacob Mchangama, although polemical and open to several methodological challenges regarding data collection, analysis and conclusions, is an illustration of the kind of work needed. Other interesting efforts in that direction have been recently made in the growing literature. My own research empirically analyses thousands of right-to-health cases adjudicated in Brazilian courts since 2000 and tries to gauge their impact on the actual enjoyment of that right by the Brazilian population. More such research, focusing on particular societies, is required to test sweeping, sceptical claims such as Mchangama’s argument that “the introduction of social and economic rights do not, in general, have robustly positive effects on the population’s long term social development”. This seems especially hyperbolic and implausible in the case of Brazil and, I suspect, in other countries as well.

In the Brazilian case, despite being a fierce critic of what I call the “Brazilian model” of health judicialization—mainly due to the inequitable effects it has had on the public health system—I believe that the 1988 constitutionalisation of social rights has likely contributed to the country’s last 25 years of social improvements. 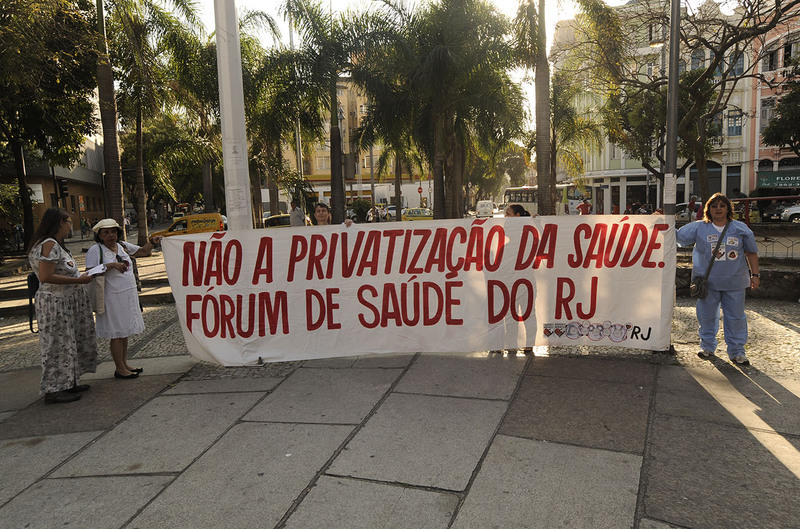 A protest against healthcare privatization in Rio de Janeiro, Brazil.

It is of course difficult to prove a direct causal connection between the constitutionalisation of social rights in Brazil in 1988, and the country’s improvements over the last 25 years. After all, there are many other important potential influences, and there is no accepted methodology available yet capable of measuring such impact, although we should continue to develop one. The challenges are many, ranging from availability and reliability of data sources, to lack of consensus on the relevant variables and on how to interpret the available data.

Still, it is implausible to suggest that Brazil’s social rights had nothing to do with the country’s recent significant social progress in the face of strong obstacles from a wave of neoliberal policies that tried hard, and unsuccessfully, to curb the social investments mandated by the constitution. More data is needed at both the macro and micro level. For those believing in social rights as a potentially transformative tool, this is where we must now focus our efforts.

Dr. Octavio Ferraz is a Reader in Transnational Law at King’s College London. He holds an LLB and MPhil in Law, an MA in Medical Ethics & Law and a PhD in Law (University College London). He has also been a senior research officer to the UN Special Rapporteur for the right to health and an Associate Professor at Warwick Law School.