Here’s how the existing human rights framework confronts statelessness and the gaps that remain. 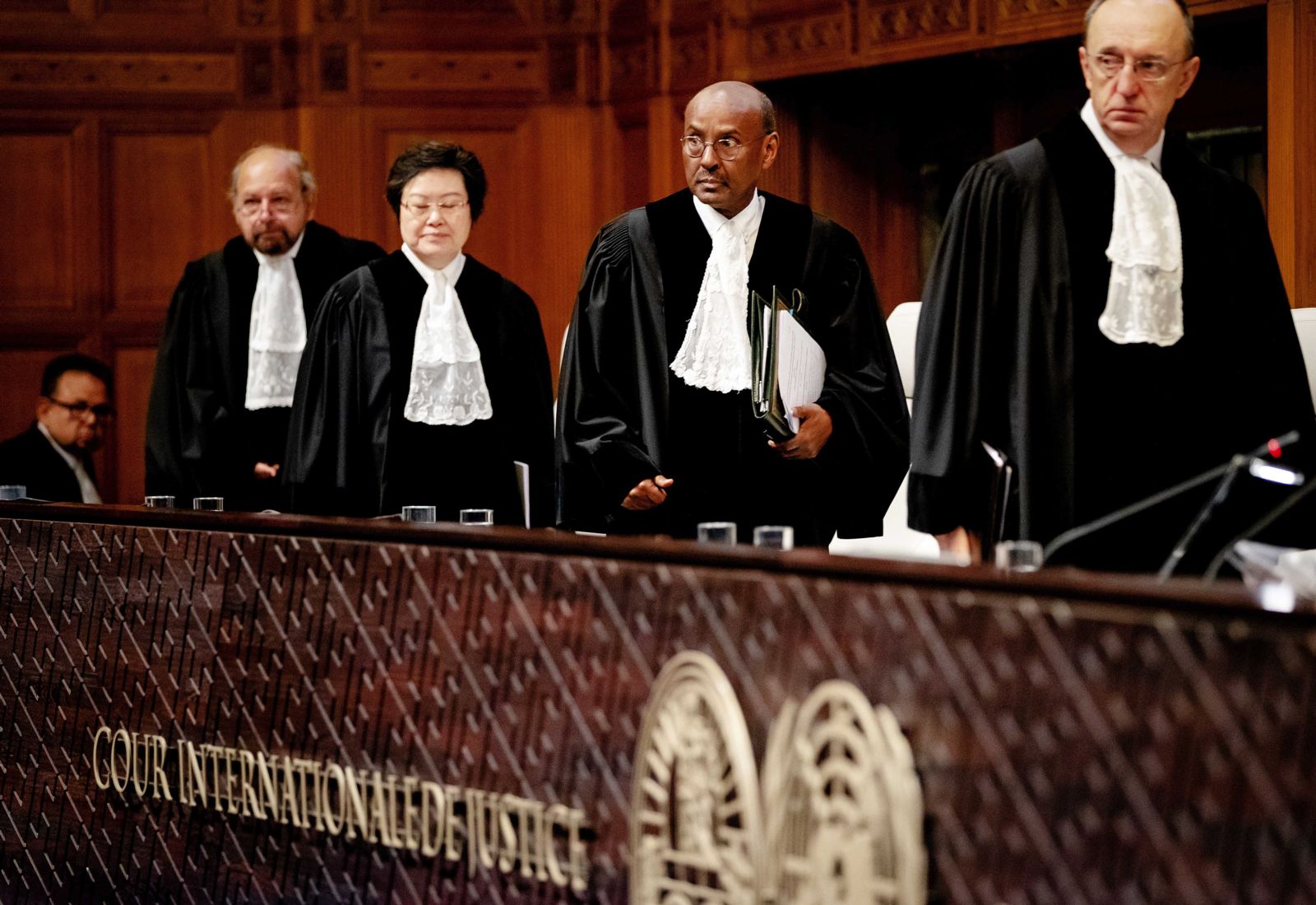 The Hague (Netherlands), 23/01/2020.- President of the International Court of Justice, Abdulqawi Ahmed Yusuf (2-R), leaves after ruling in the lawsuit filed by The Gambia against Myanmar, which is accused of genocide because of the persecution of a Muslim minority in the country. EFE/EPA/ROBIN VAN LONKHUIJSEN

At the epicenter of Myanmar’s internal conflict is the failure of a crucial human right to materialize: the right to nationhood. As of 2020, the UNHCR reported a conservative estimate of 4.2 million stateless individuals, acknowledging the true global figure is likely closer to 10 million.

Individuals without nationhood face extreme vulnerabilities. They lack legal protection and the right to vote, and experience heightened barriers in accessing healthcare, education, employment, and other liberties often enjoyed by those with civil status.

Myanmar’s genocidal campaign against the country’s Rohingya Muslim population, an ethnic minority group denied citizenship in 1982, also exposes a compounded risk of physical persecution, as these communities have no claim to the kind of recourse and protection granted under national law.

On top of these often-heightened vulnerabilities, the human rights framework is ill equipped to provide protection for stateless individuals or pathways to citizenship. Protective processes and enforcement mechanisms are undeveloped relative to the norms enshrined in international agreements.

Limitations in addressing statelessness do not derive from a lack of engagement. While language advocating for statehood has long been circulated in the international arena, existing agreements provide only a rudimentary level of actionable guidance and are difficult to enforce.

The right to nationhood has been enshrined in various international conventions, from the 1948 UN Declaration of Human Rights up through the 1997 European Convention on Nationality.

On top of these often-heightened vulnerabilities, the human rights framework is ill equipped to provide protection for stateless individuals or pathways to citizenship.

Endemic in these agreements, however, is a failure to prescribe how to implement recommendations for reducing statelessness. When non-signatory states deny citizenship, who is responsible for assigning statehood? And how can the international community hold states accountable for granting citizenship within their own territory?

Myanmar is a signatory to the 1948 UN Declaration of Human Rights, but has denied the Rohingya citizenship without much consequence. This lack of accountability and designated responsibility-sharing, concerningly, has also been pervasive in Myanmar on other accounts, including the unfolding refugee crisis as the Rohingya flee violence. This exposes a deeply entrenched flaw of the human rights system: any international action is predicated on states’ willingness to act, and should they opt for passivity, little protection ensues.

Of the specific recommendations that have been disseminated, other challenges also remain unresolved. The US Department of State and UNHCR recommends actions such as the documentation and registration of all individuals, but the presumption that documentation equates to protection is misguided. Stateless people across the globe are documented, but that has not always acted as a pathway to nationhood.

Many recommendations can be and have been actively co-opted to deepen the marginalization of already vulnerable communities without ever granting citizenship. Myanmar’s government has weaponized Rohingya registration to exercise extensive control over this population. Heightened visibility has produced less freedom and fewer rights, not more.

The UNHCR’s action plan to end statelessness includes recommendations such as endorsing the UN Statelessness Conventions and improving data. Endorsement is challenging because international agreements, by nature voluntary, are not always widely ratified, and incentivization techniques are susceptible to failure.

Data also presents its own roadblocks. It is understood as a crucial piece of addressing a variety of human rights concerns, such as gender-based violence, by which sex-disaggregated data allows for gender-sensitive interventions. In a parallel strain, data on stateless individuals allows for contextually responsive policymaking and programming. Yet, due to the nature of statelessness, collection is challenging.

Substantively, the human rights framework is also not designed to resolve underlying ethnic and cultural tensions, both catalysts of discrimination against the Rohingya. Sustainable solutions require an acknowledgment of and response to the various cultural and ethnic backdrops of statelessness, but in its current form, the human rights system lacks structures capable of managing such contextual underpinnings.

While constraints abound, there are indications that human rights norms and formal legal frameworks can achieve incremental success in reducing statelessness. Following the UNHCR’s work alongside the international community, the Bangladeshi government, and national advocates, the Bangladeshi Supreme Court ruled in favor of assigning nationhood to about 300,000 Urdu speakers in 2008.

Still, international frameworks are not effective by their nature alone. Time and again, states have committed themselves to agreements only to later violate them. While these agreements can also act as a calling card for intervention during crises, it is not always the case that they do.

Formal mechanisms of international institutions and agreements, though, can also be supplemented by informal mechanisms. Independent feminist movements and organizations have proven influential in addressing gender-based violence for instance, but the mobilization of civil society also requires resources, which stateless persons tend to lack as a result of being denied the basic rights that often privilege citizens in obtaining those resources.

In light of limitations, the evolution of the constitutive definition of human security does present opportunities for advancing the protection of stateless peoples. The norm of nationhood as a basic right is a widely held value today, and one which has seen continued engagement by the international community.

To end statelessness across the globe though, requires a more robust framework: one that not only corrects the substantive and procedural shortcomings of agreements, but that also harnesses the capacity of civil society by directing funding and other resources toward on the ground mobilization.