Phantom rights: the systemic marginalization of economic and social rights

Neither the UN nor civil society is doing much about the deep resistance of many states to proper recognition of economic and social rights.

Conventional wisdom celebrates the great strides that have been made in recent years in relation to economic and social rights. The process of including those rights in constitutions has moved quickly in recent years. Courts in various countries have generated valuable case law, UN member states adopted a complaints mechanism (Optional Protocol) linked to the International Covenant on Economic, Social and Cultural Rights and the UN has established several new mandates devoted to monitoring these rights. Indeed, international human rights bodies have devoted far more time to debating such rights than they once did.

In many respects, however, the approach currently taken by the international human rights system all but ensures the worst possible outcome. On the one hand, the correct approach insists that economic and social rights are indivisible from, and of equal importance to, civil and political rights, suggesting that they can provide a meaningful response to extreme poverty, extreme inequality and other forms of rampant social injustice. On the other hand, the international human rights system systematically marginalizes those rights, and tolerates a situation in which the majority of states avoids proper recognition of these rights and fails also to hold anyone to account when they are routinely ignored.

Despite the fact that intergovernmental bodies and civil society actors, especially at the international level, are actively pumping out detailed and lengthy interpretations of economic and social rights provisions designed to help governments and other actors to better understand the nature and scope of the relevant obligations, there are very few meaningful responses from governments at the national level. While greater attention to these rights can aid and empower civil society actors, they alone cannot bring about the deep societal change that is required if economic and social rights are to be taken seriously as human rights. 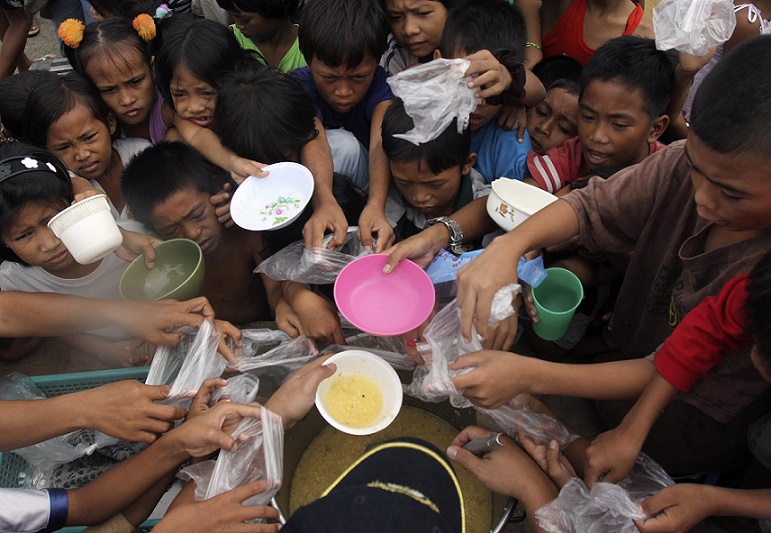 Children jostle for free food in Manila, Philippines. To truly protect economic and social rights, political obstructions and complacency must be corrected.

At the end of the day, the most telling evidence of the extent to which economic and social rights remain unacknowledged as human rights is the frequency with which debates about them slide imperceptibly and almost naturally into broad discussions of development. States challenged to explain how they respect economic and social rights will describe general development or social welfare initiatives as though they are necessarily synonymous with such rights. But development initiatives might not be rights-promoting or even rights-protecting. Even when they are, they may end up only promoting the special interests of a targeted group.

Treating economic and social rights as human rights rather than long-term goals introduces an element of immediate salience.

The fact that governments and others avoid rights terminology so assiduously shows that the chosen terms do indeed matter and make a big difference. First, the use of the human rights framework ensures that in programs designed to promote collective wellbeing, the rights of the individual are taken into account. Second, in contrast to generic social justice language, human rights discourse directs policymakers and others back to the internationally agreed formulations of economic and social rights and the jurisprudence that has painstakingly evolved. Third, treating economic and social rights as human rights rather than long-term goals introduces an element of immediate salience that might otherwise not be present. Fourth, and perhaps most importantly, the language of rights recognizes and insists on the dignity and agency of all individuals and it is intentionally empowering. The legal conception of human rights presupposes and demands accountability.

Of course, the past quarter of a century has seen a great number of important initiatives, especially in areas such as the right to housing, the right to food, the right to health and the right to water. But acceptance in law and in practice that economic and social rights are actually human rights, with the set of clear legal consequences that this entails, remains marginal.

The equal status of the rights recognized in the Universal Declaration of Human Rights reflects a hard-fought ideological and political compromise, not only between capitalist and communist approaches in the 1940s, but between continuing differences in perception over what societies should value most and the terms of the social contract between the state and its inhabitants. It is the glue that has held the package together, enabling the reconciliation of otherwise starkly competing visions.

There is also the question of the legitimacy of the overall human rights enterprise. Critics increasingly portray the economic and social rights framework as being toothless and ineffectual and bringing small or no returns in terms of social justice. Closely linked to this loss of legitimacy is a loss of credibility in the eyes of rights holders. The second-class status of economic and social rights has deeply negative consequences for the potential of the human rights movement to gain the widespread support that it needs. The fact that the movement is subject to powerful challenges at the global level is due in significant part to the perception that its overriding preoccupations do little or nothing to address the most abiding and pressing challenges confronted by a large part of humanity.

With all this to consider, there are three key ingredients for adequate recognition and implementation of economic and social rights: (a) the need to accord legal recognition to the rights; (b) the need for appropriate institutional arrangements to promote and facilitate realization of the rights; and (c) the need for measures that promote governmental accountability. This can be termed the recognition, institutionalization and accountability framework, or the RIA framework.

It is difficult to understand how the obligations to “recognize” the rights, and to “guarantee” non-discrimination, could possibly be achieved in the absence of targeted legislative or equivalent measures, as many governments argue. The key element here is the recognition of the norm itself, not merely the adoption of measures that are pertinent to the subject-matter of the norm. Where no institutions are designated to take the lead in implementing a particular human right, the likelihood is that little will be done to treat it as a human right per se.

A conception of human rights that implicitly accepts a radical hierarchical distinction between the two sets of rights is one that is fundamentally incompatible with international human rights law. Just as importantly, it offers no solution to the increasingly urgent challenges posed by radical and growing inequality and widespread material deprivation in a world of plenty. The reality is that governments have not accidentally overlooked the significance of the recognition, institutionalization and accountability (RIA) framework. On the contrary, the widespread failure to ensure that these three building blocks are in place in relation to economic and social rights is the principal symptom of the resistance.

Philip Alston’s report on these issues was presented to the UN Human Rights Council in June, 2016.