This project seeks to identify opportunities and challenges for educators committed to social justice and healing to critically examine their practices and engage in cross-community and cross-border collaborations. 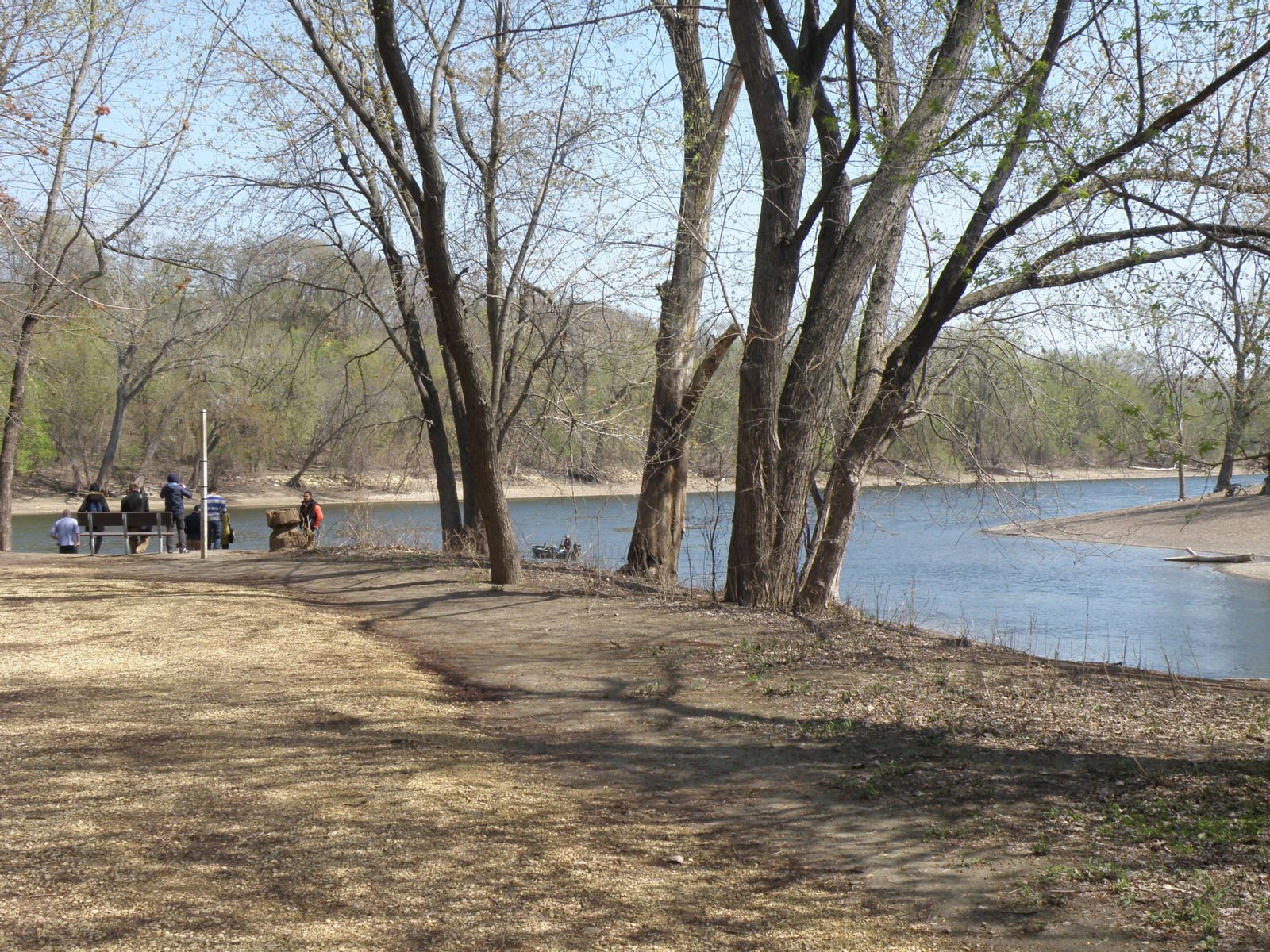 Bdote, a sacred Dakota site at the confluence of the Mississippi and Minnesota Rivers and the location of the Fort Snelling internment camp, where 1,700 Dakota people were imprisoned before their forced removal from their homelands in 1862. Photo by Jennifer Hammer (Courtesy of the University of Minnesota Center for Holocaust and Genocide Studies)

Canada convened a national Truth and Reconciliation Commission (TRC) between 2008 and 2015, resulting in a national apology to Indigenous peoples and calls for systemic reforms, including education. The TRC sparked a national conversation bringing awareness, resources, and training opportunities to educators in Manitoba. While no such national efforts have taken place in the United States, educational reforms have been initiated at the state and municipal levels. Specific initiatives (exhibits, reinterpretation of sites, and renaming of places) have raised visibility to Minnesota’s Indigenous histories and present realities.

This project seeks to identify what educational best practices can be drawn from two contexts in which the State is differently invested in advancing the goals of reparative justice. We target two regions with similar histories of Indigenous dispossession and settlement during the 19th century: Minnesota and Manitoba. Both regions have similar demographics regarding ethnic diversity, Indigenous populations (for instance, Ojibwe and Dakota are both in Minnesota and Manitoba), urban-rural divide, and immigration trends. Furthermore, Minneapolis and Winnipeg, cities with larger urban Indigenous populations, have similar histories of Indigenous resistance and activism, such as the American Indian Movement, founded in Minneapolis, and contemporary human rights issues, such as the disproportionately high numbers of murdered and missing Indigenous girls and women in these areas.

Both the US and Canada implemented policies of forced assimilation and Indigenous residential school systems were established in Manitoba and Minnesota. Paralleling these similar histories are developments in the ways in which Indigenous peoples were included (or excluded) within dominant social studies curriculum and educational sites and museums throughout the last 150 years. They also have similar decentralized education systems, in which schools are locally controlled but overseen at the provincial and state levels.

After in-depth background research into the landscape of formal education in Manitoba and Minnesota, our team started conversations with Indigenous and non-Indigenous K-12 teachers, school/district officials, activist/advocacy groups, and professionals in leading positions in educational institutions such as museums and historical societies. We hope to learn from them how they understand the task of reparative justice in their respective fields of action, and how they evaluate the initiated reforms and the current state of Indigenous inclusion. As a team of faculty, students, and staff of the University of Minnesota-Twin Cities, which resides on Dakota land ceded in the treaties of 1837 and 1851, we also reflect on our institution’s colonial history, extractive academic practices, and prolonged absence of Indigenous voices.

With the goal of promoting exchange between researchers and educators, we planned a two-day summer workshop at the Canadian Museum for Human Rights in Winnipeg. With the advent of the pandemic, we transitioned to a webinar attended by over 100 participants and a facilitated discussion with a targeted group of twenty educators from both regions. We discussed challenges, lessons, and best practices regarding Indigenous representation within educational institutions, such as schools, museums, and historic sites.

In these meetings and prior interviews, participants identified successes and pending tasks for the advancement of reparation in the field of education. A specific structural challenge is the paradox that that state educational institutions are now charged with the task of repairing an injustice they were directly part of, namely the "civilizatory project" of indigenous erasure through forced assimilation. There has been progress in terms of new forms of inclusivity, as curricula, sites, and museum exhibits are relying more on Indigenous storytelling and native-led initiatives. In both contexts, increasing numbers of Indigenous professionals are shaping educational policy and serve in educational institutions as public historians or curators.

A specific structural challenge is the paradox that that state educational institutions are now charged with the task of repairing an injustice they were directly part of, namely the "civilizatory project" of indigenous erasure through forced assimilation.

Participants from both contexts pointed to significant obstacles regarding non-native educator preparation or cultural competency about Indigenous cultures and present realities; the problem of conflating all Indigenous groups and voices in educational initiatives; and the difficulty of striking a balance—in the curriculum, pedagogies and museums—between representations of contribution and strength (sovereignty, nationhood) versus those that focus on historical and ongoing violations experienced by Indigenous peoples. For instance, one of our indigenous partners emphasized this strength-based approach during a conversation asking “can one account for violations properly without understanding what was lost?”

On the heels of our first cross-border webinar and workshop, and based on participant feedback, we are eagerly planning additional workshops that will examine more specific issues within the realms of museum and K-12 education. These workshops will allow practitioners from Minnesota and Manitoba to come together to share and, ultimately, create resources. Future workshops will focus on unsettling colonial museum practices, aiming to provide a space for curators and education staff at public museums to discuss how they have, among other things, engaged Indigenous communities in the creation of exhibits; indigenizing education and culturally relevant and sustaining (“truth-telling”) curricula and pedagogies, to challenge dominant colonial narratives and transform teaching; and teaching about treaty rights and Indigenous sovereignty in both contexts.

Framework for Education as Reparative Justice in a Settler Colonial Context

The final goal of the project, a goal that has emerged out of many conversations with educators in both Minnesota and Manitoba, is to collaboratively create a framework of reparative justice best practices for individuals and institutions. We are thinking especially of those institutions seen as particularly hampered by the legacies of the settler colonial project, such as public schools and public museums. Practices might include forming collaborative relationships with Indigenous nations and communities, while acknowledging that such relationships often are what Eve Tuck (2012) has referred to as “contingent collaborations.” These are collaborations that, despite shared short-term goals, recognize the long-term incommensurability of Indigenous decolonization efforts and the human and civil rights-based social justice approach that many non-Indigenous institutions and educators desire.

Exploring public education as a potential component of reparative justice is inextricably tied to questions of recognition, redistribution and sovereignty. As a Dakota educator indicated, while land is the central demand of reparation and redress, education can contribute to the development of a stronger relationship to the land among non-native people and thus promote policy that is in line with the Dakota land ethic. At the same time, scholars and practitioners have pointed out that even the educational initiatives that are held up as successes, such as those leading to broader awareness and acknowledgement, might do little to alter the deep-seated power relations and structural inequalities in settler colonial societies. Our project seeks to identify the opportunities and challenges for educators and others committed to social justice and healing to critically examine their practices and engage in cross-community and cross-border collaborations to imagine and enact meaningful changes.

Alejandro Baer is associate professor of Sociology and Stephen C. Feinstein Chair in Holocaust and Genocide Studies at the University of Minnesota.

George Dalbo is a social studies teacher and Ph.D. candidate in Social Studies Education at the University of Minnesota

Jillian LaBranche is a Ph.D. candidate in Sociology at the University of Minnesota.