There is an urgent need for the international community to extend the scope of the SDG 16 civic space indicators that promote and protect civic space. 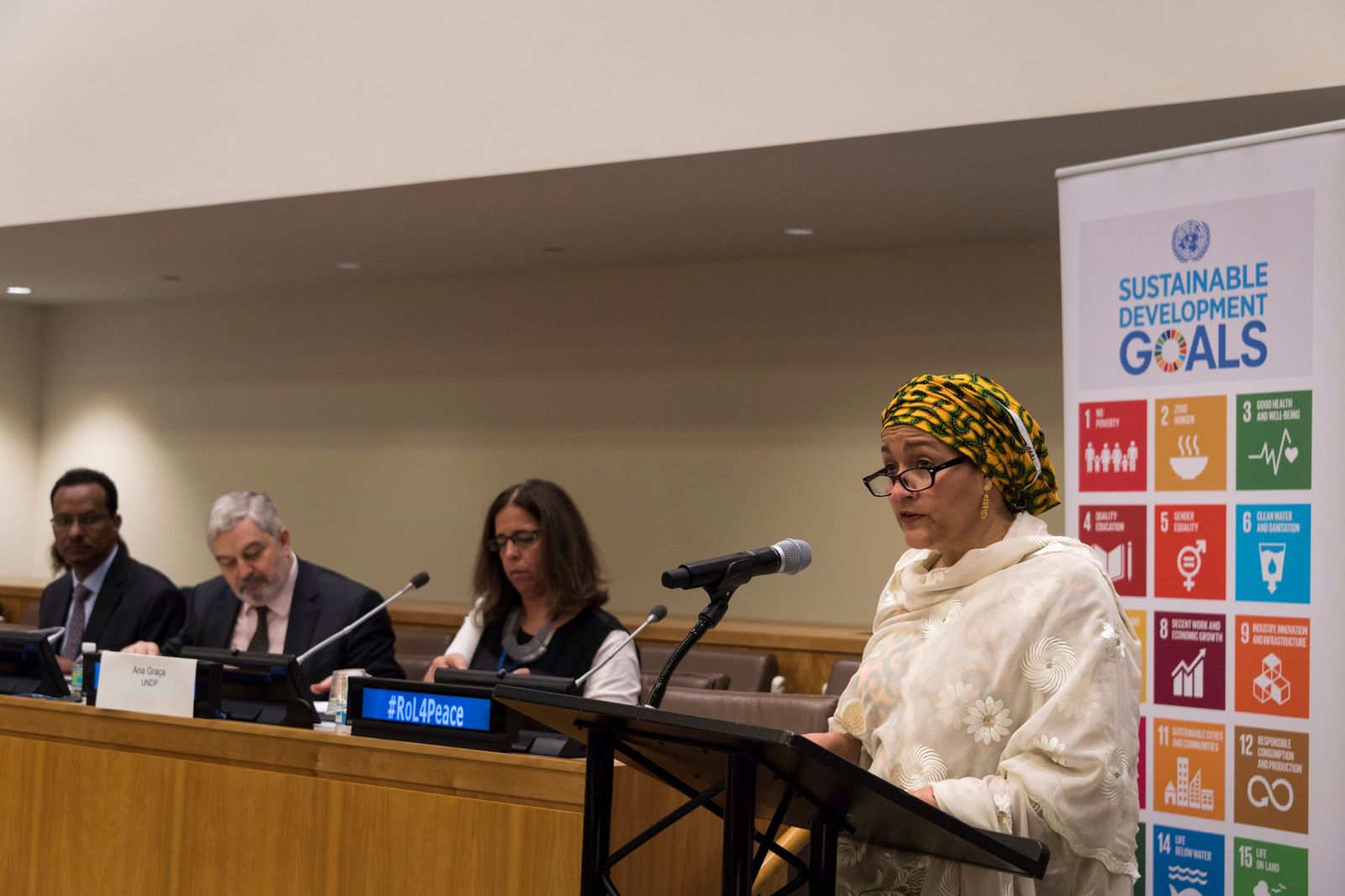 In June 2017, Her Excellency Ms. Amina J. Mohammed, Deputy Secretary-General of the United Nations, gives remarks during the opening of the UN session on SDG 16, the Rule of Law. UNDP / Freya Morales (CC BY-NC-ND 2.0)

Many in the human rights community are skeptical about what they regard as the weak potential of the Sustainable Development Goals (SDGs) to advance a universal human rights agenda. Such ambivalence has meant that some human rights activists and practitioners overlook or disregard the role that SDG 16 could play in promoting civil and political rights globally. This goal broadly focuses on issues of governance and aims to “promote peaceful and inclusive societies for sustainable development, provide access to justice for all, and build effective accountable and inclusive institutions at all levels”—a goal that has profound implications for civic spaces across the world.

Current research shows that civil society in over half of the countries of the world is facing serious and growing restrictions on its freedom to engage, express itself, and be heard. With increased surveillance, persecution, and even violence against civil society, many civil society organizations have come under attack, particularly those advocating on behalf of excluded groups and minorities. Human rights defenders around the world have been targeted: for example, 212 environmental and land rights defenders alone were killed during 2019, and 219 human rights defenders are estimated to have been killed or died in detention in 2016.

The freedom to exercise civil and political rights is also extremely important for civil society as it struggles to fulfil the role mandated by the 2030 Agenda. The multi-stakeholder model of implementation, monitoring, and review, which is central to this Agenda, requires civil society to have access to adequate civic space, and an enabling environment to operate. A recent Forus report highlights how SDG 16 can provide important leverage for civil society everywhere in its efforts to create and defend civic space, and to be more effective in monitoring and implementing the 2030 Agenda.

A specific target of SDG 16, Target 16.10, commits UN member states to “Ensure access to public information and protect fundamental freedoms”. But despite the clear aim of this target, the two global-level indicators to assess progress do not adequately measure the extent to which these freedoms—particularly freedom of association, expression and assembly—are being protected. The first indicator covers “the number of verified cases of killing, kidnapping, enforced disappearance, arbitrary detention and torture of journalists, associated media personnel, trade unionists and human rights advocates in the previous 12 months”. The second counts “the number of countries that adopt and implement constitutional, statutory and/or policy guarantees for public access to information”.

These “outcome indicators” focus primarily on violations of the rights to bodily integrity and life but they do not directly measure how much freedoms of association, assembly and expression are protected in day-to-day civic life. In particular, the first indicator needs to be complemented by the development and adoption of other relevant structural and process-related civic space indicators. For example, a possible structural civic space indicator could be “the existence and coverage of domestic laws protecting the rights to freedom of association, assembly and expression”. Meanwhile, a process-oriented civic space indicator could be “the proportion of received complaints on the rights to freedom of expression, association and assembly invested and adjudicated by courts or other competent national mechanisms in the last 12 months”. These indicators could subsequently be adopted at a national level where specific gaps in civic space have been identified.

This failure to monitor and measure the extent to which citizens are free to participate in the civic life of their societies is a significant omission. The civic space case studies in the recent Forus report highlight the many restrictions to political freedoms that civil society currently faces in different parts of the world. These restrictions will negatively impact the capacity of civil society in those countries to contribute to the effective implementation of the 2030 Agenda.

There is an urgent need for the international community to extend the scope of the currently limited SDG 16 civic space indicators that measure how many activists, human rights defenders and others have been kidnapped imprisoned or murdered. Additional global indicators must be developed to measure the extent to which citizens can exercise their rights to freedom of association, assembly, and expression in their communities and societies, in accordance with international human rights standards and national human rights laws. Given that the OHCHR, together with UNESCO and the ILO are the official custodians for Target 16.10.1, civil society and other key stakeholders need to engage with these organisations to participate in the process of developing better data collection.

After releasing the SDGG 16 report, Forus and its partners intend to collaborate with interested civil society networks and other groups on a new global advocacy campaign. This campaign will call for a wider range of civic space indicators to be adopted by UN member states as official SDG16 indicators and to become part of national, regional and global review processes of the 2030 Agenda. The involvement of human rights activists and practitioners in this global advocacy campaign, and in the wider monitoring and review of SDG 16 implementation, will be crucial for several reasons.

First, the contribution of the human rights community to the global campaign would be critical. Human rights practitioners could bring their considerable specialized knowledge, advocacy capacities, and political influence to bear on the campaign.

Second, the human rights community could help to address the significant data gap in SDG 16-related civic space and wider governance monitoring systems. There is a growing and unfulfilled need for official statistics linked not just to the measurement of civic space but also to the measurement of governance (i.e. inclusion, civic participation, rule of law, access to information). At the end of the first cycle of the implementation of the 2030 Agenda in 2019, very few countries and statistical offices have successfully produced governance data to report on progress with SDG 16. There has been a clear failure to use data and information produced for other relevant reporting processes, such as human rights mechanisms, to report on progress with SDG 16 implementation.

Third, human rights advocates could also add their voice and ability to influence those of CSO networks calling for an annual review of SDG 16 for the 2030 Agenda. A precedent exists with SDG 17, which is reviewed annually by the UN HLPF. This would serve not just to keep the issues of civic space, the exercise of fundamental freedoms and the promotion of human rights high on the international political agenda on an ongoing basis, but also the wider issues of governance, justice, peace, and security.

In conclusion, the combined energy, commitment and specialised knowledge of the human rights community could bring a considerable impetus to current efforts to realise the critically important promise of SDG 16 to promote and protect civic space. Human rights advocates and practitioners should join forces with civil society movements and other interested stakeholders to launch a broad global advocacy campaign for a wider range of civic space indicators to be adopted as part of official SDG 16 global, regional and national review processes.

Deirdre de Burca currently works as the advocacy coordinator with Forus, a global network of 69 national development platforms and six regional coalitions. Deirdre previously worked as the director of advocacy for World Vision's Brussels office, and is a founding member of SDG Watch Europe — a broad alliance of European civil society organisations working to ensure the full implementation of Agenda 2030 for Sustainable Development Goals by the EU and its Member States. She can be reached at deirdre@forus-international.org.