How should Israeli rights groups respond to this new war, and to the hatred many Jewish Israelis feel towards them and their work?

As the Israeli-Gaza war continues, what are the dilemmas facing human rights groups working to advance and defend Palestinian rights? Can they have an impact or even a say, without losing credibility already damaged by earlier events?

We know from previous postings on openGlobalRights that Israeli rights groups have a hard time raising money from their co-nationals, or building mass support for their work (see here, here, and here). The role of human rights organizations following the international investigations of alleged war crimes during Cast Lead in late 2008 exposed and perhaps deepened these problems.

As a pollster, strategist and analyst for both politicians and civil society, I review of how Israeli attitudes towards this sensitive activity evolved, and explore some of the strategic options human rights groups face in the immediate future.

Israelis see themselves as democratic and respectful of human rights. Generally, Israel Jews, at least, do not view the occupation of Palestinians as a reflection of Israel’s human rights record. For the first twenty years after 1967, in fact, they hardly viewed it at all. Although Palestinian human rights groups such as al-Haq were operating during that time, they had yet to make much impact on Israeli society (and still haven’t).

The first Palestinian uprising in 1987 was the first phase of an emerging human rights discourse, as the Intifada made it impossible to ignore the effects of two decades of military rule over stateless people. Israelis were surprised: overnight the Palestinian areas Israelis used to visit -  shopping cheap, eating and hiking with impunity – became ominous zones of demonstrations, burning tires and flying rocks.

Therefore when human rights groups like B’Tselem emerged to document and criticize human rights violations in the Palestinian territories, they became essentially an irritant to Israeli society, frustrating reminders that Israel’s self-image was not so rosy.

Former Israeli Prime Minister Yitzhak Rabin expressed this following the Oslo accords, when he observed that the new Palestinian Authority would be able to fight Palestinian militancy with “no B’Tselem and no Bagatz,” Israel’s High Court of Justice – implying that they would be more effective that way. The term has become a common expression that stands for this sentiment.

But ironically, the same 1987-1992 uprising that introduced “human rights” also transformed Palestinian-Israeli relations into one of active conflict – making it easy for most Jewish Israelis to see human rights as something opposed to, and subordinate to, national security.

For most Israelis – like most people around the world - national security easily trumps universal rights. As a result, few Jewish Israelis truly embraced the human rights cause with regards to the Palestinians under their control.

The second Palestinian uprising that began in September 2000 laid to rest the hopeful “peace paradigm” created by the 1993 Oslo Accords.

Now the Palestinian Authority, which did not yet exist during the first Intifada, enjoyed international recognition, partial administrative autonomy, a budget, and limited access to light weapons. Suicide bombing by Palestinian militants against Jewish civilians, moreover, became common.

As a result, many Israelis now viewed the conflict as one between equals, in which their own army battled an equally powerful Palestinian rival. Some even saw the conflict as “asymmetrical,” with Palestinians symbolizing the eternal persecution, even existential threat, against Jews throughout history.

As a result, Israeli rights groups went from being irritants to either obscurity, or were seen by some as radical left-wingers, and possibly traitors.

The Jewish-Israeli leftist political camp was also shattered. Voters evicted the center-left from power, the public’s views shifted rightward, and pro-peace activities dwindled. In a final blow, Israeli right wing leader Ariel Sharon, once sanctioned by Israel for atrocities against Palestinians during the 1982 Lebanon war, became Prime Minister. The Israeli human rights community realized it had “no partner” in its own country.

As a result, many leftists and human rights activists concluded that Israeli society would not change from within. They turned outward, hoping that Scandinavia and Europe, with fewer obligations to Israel than the US, would bring international pressure to bear.

Israel’s Cast Lead operation against Gaza in 2008-09 galvanized the country’s fragmented left, which began searching for new strategies to oppose what they saw as a disproportionate war against Gazans living under lockdown since 2007, and to oppose the stagnation in conflict resolution generally.

Mainstream Israeli society, however, saw Cast Lead as just the opposite: a fight with an extremist regime lobbing rockets at Israeli civilians. Public support for the military mission soared, and the human rights message was either ignored, rejected outright, or castigated as back-stabbing and subversive.

The post-war UN investigation led by Justice Richard Goldstone brought this hostility to a head. Although the Israeli government declined to cooperate, Israeli rights groups provided information they had collected during the war.

Goldstone’s report generated an epic fit of Israeli rage. While the report blamed both sides, its criticism of Israel incensed the Jewish public. Abroad and in Israel, Jews decried what they saw as an outrageous critique from the West, which had slaughtered six million Jews only a few decades earlier.

Given other egregious human rights violations worldwide, Jews also bristled at what they perceived of as global hypocrisy. Why was Israel being targeted for criticism, when far more severe abuses were happening elsewhere? At a cocktail party I attended around that time, one Jewish American woman told me, “We’re living in a nightmare!”

Israelis also turned their wrath on the “enemy within,” the Israeli rights organizations who had passed information to Goldstone. They were called “traitors” and “a cancer” in public forums, and one civil society group, Im Tirzu, even launched a nasty, personal campaign against  an Israeli leader of the New Israel Fund, one of the supporters of Israeli rights groups.

Many Jewish Israelis had come to believe that domestic human rights groups were foreign-funded self-haters, disguising themselves as “caring people” while really pursing the hidden agenda of destroying Israel from within. Unwilling or unable to distinguish Palestinians and terrorism, they viewed Israeli rights groups as supporting Palestinian terrorists. In the wildest of accusations they believed that terrorists and their patron states funding human rights organizations.

Israeli human rights defenders were caught off-guard as doors began shutting all around them. 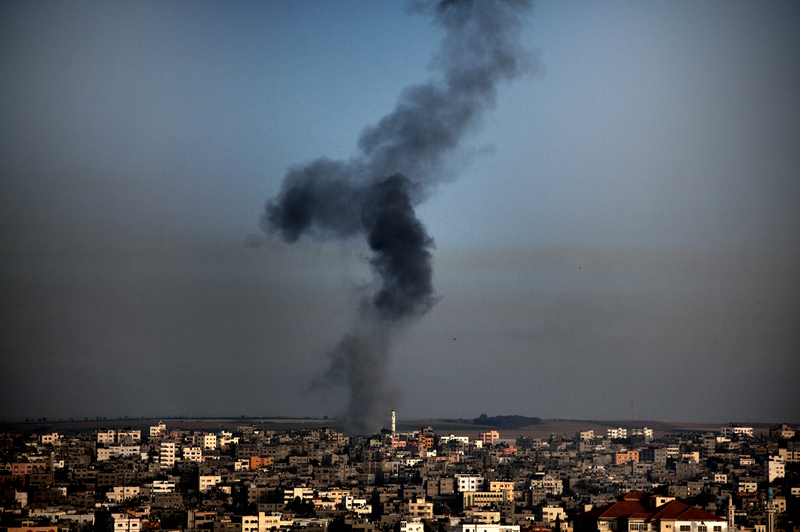 Now deep in the throes of a new war, will Israeli rights groups find a new role or enter a new phase in public perceptions? It’s too early to tell. But given the sensitivity of the previous phase, several possible courses of action seem likely; there are arguments favoring each direction, but problems with them as well.

There are no easy answers

Balance:  B’Tselem, still one of Israel’s leading rights groups, has repeatedly condemned Hamas for firing rockets from Gaza towards Israeli civilians, while also condemning the West Bank kidnapping and murder of three Jewish teens. B’Tselem has also been equally vociferous in its criticism of Israeli violations. This approach is not new, but emphasizing violations of both sides could help rebuild trust with Jewish Israelis, or at least it could help create a more cordial working relationship. Yet the biggest critique of this approach is that it implies even-handed blame, and obscures the asymmetrical nature of the conflict. Despite Hamas rockets and tunnels, Israel is still the more powerful side, with almost total capacity to destroy, restrict, contain, and repress Palestinians. Arguably, it is only oppositional political and social forces that keep Israel from unleashing its full power.

Emphasize alternative policy and solutions. Israeli rights groups, conversely, could decide that documentation and condemnation of violations is insufficient. Those activities do not address genuine security dilemmas, and do not provide realistic alternatives.

Instead, Israeli rights groups could devote more attention to policy development, cooperating with the security establishment and offering constructive proposals for those in authority to consider, rather than simply serving as an outside critic.

Yet this approach could fundamentally compromise Israeli rights groups’ role as democratic watchdog, or even enable “enlightened” – but ongoing - occupation.

This latter option has a possible silver lining, however. Mainstream Jewish-Israeli society already believes human rights groups are promoting far-left and pro-Palestinian political positions under the guise of “protecting human rights.” Were Israeli rights groups to become openly political, they would at least no longer be accused of harboring hidden agendas.

This might not make more Israeli Jews like the human rights community, but it would at least demystify what they believe and could help rights groups appear more transparent and honest.

There are no easy answers.