How a temporal perspective affects the struggles for Indigenous self-determination 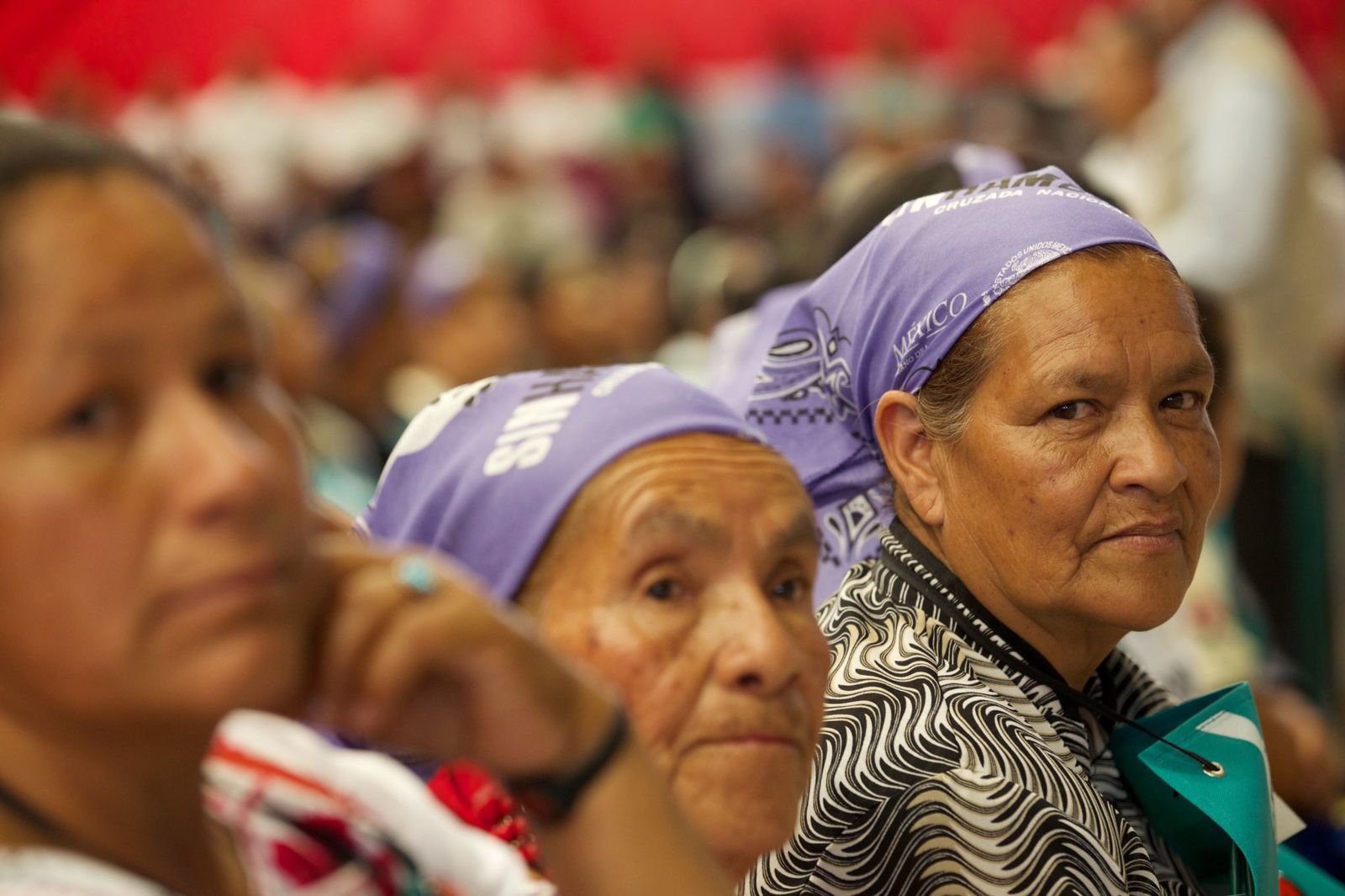 A meeting with Purépechas communities in Chilchota, Michoacán in 2014. Presidencia de la Republica de Mexico/(CC BY 2.0)

The “timefulness” of human rights has been a recurrent topic in OpenGlobalRights. OGR’s Editor-In-Chief César Rodríguez-Garavito has urged human rights activists to look further into the future and more recently, Zinaida Miller, an associate professor at Seton Hall University’s School of Diplomacy and International Relations has advised us to look further into the past. Speaking from the perspective of climate and transitional justice struggles, these two complementary gazes highlight the dangers of short-termism whether we look forward or backward in time.

Here I bring this temporal perspective into another historic and urgent issue: the struggles for Indigenous self-determination. Unlike other agendas, Indigenous activism is strongly grounded on a long-term awareness of the past. Indigenous activists self-consciously address historical injustices rooted in processes of colonization. However, despite their time-awareness, the dangers of “short-termism” are still present.

When it comes to Indigenous rights, this problem becomes more practical: When human rights laws formally acknowledge historical grievances, but simultaneously keep their present-day consequences out of reach. The clearest example is the overwhelming assumption that Indigenous rights cannot challenge the foundations of the— colonial or settler— state sovereignty. These limitations greatly curtail the temporal scope of the injustices that Indigenous rights can aim to transform. Since activists are forced to accept the existing structure of their host states, they enforce a time-border that bars them from questioning the state-making decisions of the far-gone past.

Strategically speaking, a time-full perspective can reveal these time-borders, but it can also suggest ways to expand them. One such example is found in the Purhépecha region in Mexico, where contemporary struggles for self-determination are dislodging the distributional injustices caused by a politico-administrative structure that was established more than a century ago.

As with most federal systems, the Mexican constitution divides the administrative powers of the state between a Federation, states and local government bodies —called Ayuntamientos. Almost every Indigenous community in Mexico is formally governed by an Ayuntamiento, whose jurisdiction expands across several (Indigenous and non-Indigenous) towns. These bodies exert discretionary control over the local budget, which unfortunately means that they  often allocate a disproportionate amount to larger, non-Indigenous villages.

This institutional design remained entrenched for decades, until 2015 when the community of Pichátaro kickstarted its transformation by mobilizing against an unjust distribution of funds by their Ayuntamiento. They went to Court and claimed a right to directly administer a proportional share of the local budget. The judges ruled in their favor but found that transferring money away from the Ayuntamiento—and towards an Indigenous government—would constitute an administrative measure that warranted a prior consultation. Since the community had been struggling for budgetary autonomy, when the consultation took place the answer was, unsurprisingly, in favor of transferring the funds.

Since then, Pichátaro became the first indigenous community in Mexico to assume direct control over a share of the public budget through a human-rights based strategy. Soon after, other Purhépecha communities (like San Felipe de los Herreros and Arantepacua) replicated the process until eventually these type of consultations got sanctioned into law. In 2021 alone, about a dozen villages have demanded to be consulted about whether their municipality should transfer (or keep) their share of the budget. Among them, the communities of San Angel Zurumacapio and La Cantera are already exercising budgetary self-determination.

In each of these cases, Purhépecha communities are sidestepping the short-termism embedded in human rights law. They magnify the temporal reach of their right to Free, Prior and Informed Consent (FPIC) to include a status quo that would normally be considered unquestionable under mainstream doctrines. According to the United Nations Declaration on the Rights of Indigenous Peoples, FPIC requires States to seek indigenous consent before implementing any project that may affect Indigenous communities. Based on this notion of a prior consultation, the duty to consult generally exists over things that are about to happen, not things that already did.

In this way, human rights law creates a time-border between what can and cannot be consulted. Granted, this time-border can get blurry sometimes. This happened when the Mexican Supreme Court decided that the duty to consult persists after a project’s implementation insofar as a right to be consulted existed at the moment in which it began. But even then, the doctrinal assumptions dictate that the temporal reach of FPIC cannot go beyond the immediate past or future.

This time-border excludes a whole lot. It leaves indigenous peoples without a right to be consulted about the routine functioning of institutions, or about the ongoing effects of century-old policies. In other words, FPIC is unable to challenge the continued operation of the numerous colonial vestiges that survive inside contemporary states.

It is only once we consider its temporality that we are able to see how their practical effects collapse past, present and future.

The everyday operation of Mexican Ayuntamientos would be an example of a colonial relic that is normally assumed to exist beyond the temporal reach of FPIC. After all, the current Mexican constitution was adopted in 1917 and the creation of Ayuntamientos dates from even further back. It doesn’t matter that this institutional design is rooted in colonial strategies, or that they still reproduce discriminatory inertias. Most human rights lawyers would assume that there is no right to be consulted about their continued existence— and yet, the Purhépecha used FPIC to transform them.

A noticeable aspect of this Purhépecha strategy is that it formally adheres to the time-border set by human rights law. These consultations are indeed prior to the moment in which a community is “affected” by a budgetary transfer. It is only once we consider its temporality that we are able to see how their practical effects collapse past, present and future. They question the routine operation of present-day Ayuntamientos. They enable retroactive indigenous participation in the institutional design of local government— a decision taken more than a century ago. And most importantly, they open space for future experimentation.

Seen through the time-full perspective advocated by Rodríguez-Garavito and Miller, these cases reveal both a strategic and transformative potential. They underline the importance of scrutinizing the time-borders imposed by legal assumptions, and demonstrate the possibility of circumventing them. Considering how deep colonial structures are rooted in the everyday workings of states, similar forms of “time-full” strategizing will be necessary to move towards a decolonial future.

Angel is a SJD Candidate at Harvard Law School and Lecturer at  Boston University in the International Human Rights Clinic. His Twitter is @AngelGCabreraS.