One should be cautious when conflating today’s human rights understanding with that of the past when narrating human rights history. 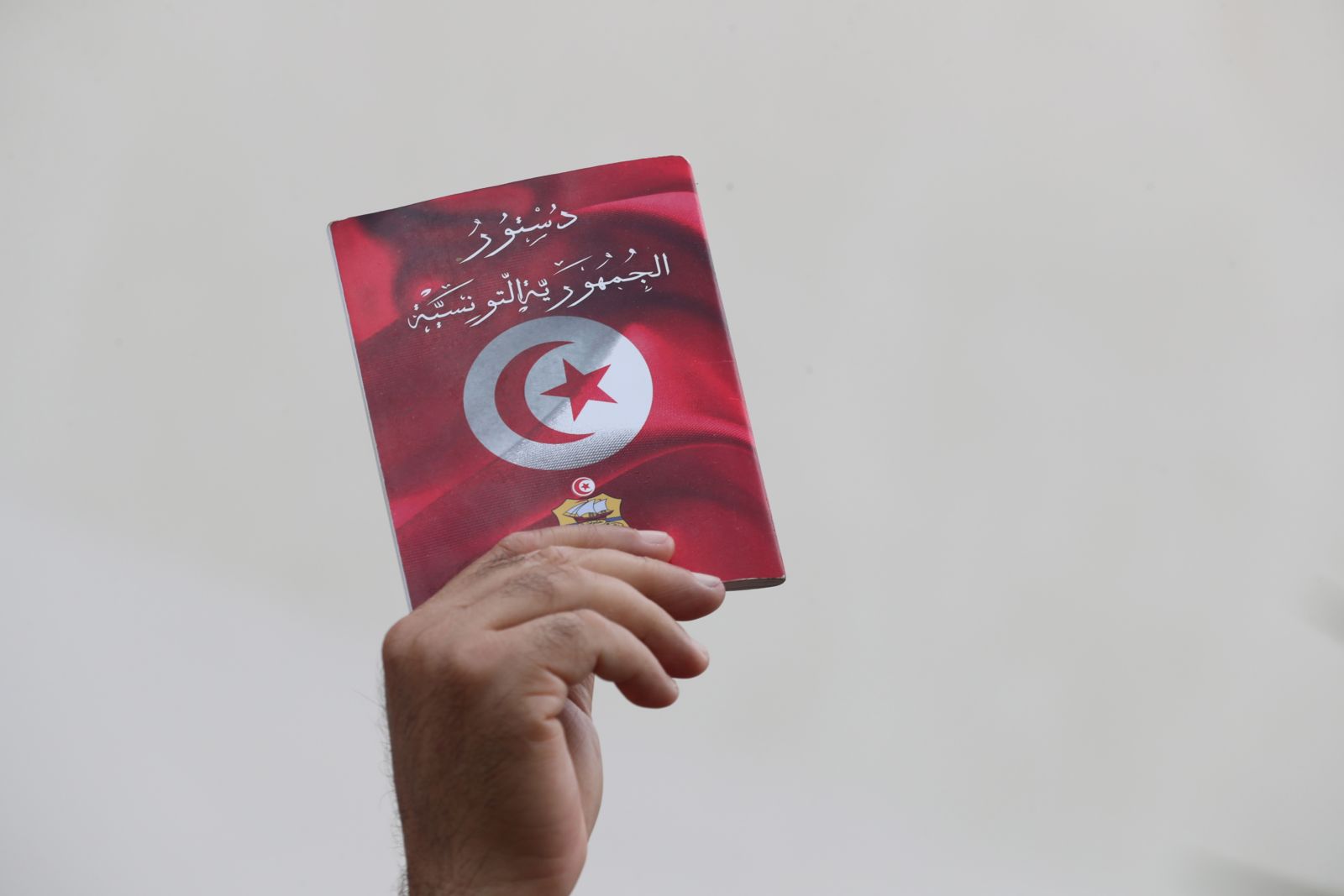 An opponent of Tunisia's President Kais Saied holds the Tunisian constitution during a protest against what they call his coup in 18 September 2021. EFE/EPA/MOHAMED MESSARA

According to many foreign and Tunisian scholars and activists, there is a direct link between the creation of the ICSHRT and the contemporary understanding and  recognition of human rights activism in Tunisia. This argument implies that the formation of this committee marked the beginning of a linear process of developing a universal human rights culture running from the 1960s until today. However, one should be cautious when conflating today’s human rights understanding with that of the past.

Despite having adopted a decidedly liberal constitution in 1959, post-independence Tunisia developed into a presidential,  authoritarian state, albeit within a modernist, socialist framework that was built on state-supported industrialization and agricultural cooperatives.

Out of this context grew a left-wing opposition rooted in the student movement that organized around a political journal called Perspectives. It denounced class exploitation, encroachment on freedoms, and the Tunisian president's support for the US war in Vietnam. Inspired by the cultural revolution in China, a faction of the group called for the creation of a vanguard party to lead the workers’ revolutionary struggle for equality and freedom.

After demonstrations in March 1968, the group was heavily repressed by the regime. Hundreds were arrested and tortured. After a grossly unfair trial, the group received heavy sentences for creating an illegal organization and conspiring against state security.

In response to the unjust trial of the student movement, the prisoners’ relatives, French and Tunisian friends, teachers, and political affiliates created the International Committee for the Safeguarding of Human Rights in Tunisia (ICSHRT). This effort then branched out to French lawyers and student and trade union representatives with a background in anti-colonial opposition.

It was perfectly possible for the Committee to refer to the UDHR without benchmarking its solidarity work against the principles of the nascent UN international human rights framework. What drove its work was indignation about the injustices committed against the political prisoners and compassion for their dire humanitarian situation. These forces primed them to compromise, to set ideological differences aside, and to make the human situation of the prisoners a primary concern.

The committee ultimately settled on the objectives of improving prison conditions, informing the public about the prisoners’ situation, and obtaining amnesty and full rehabilitation of all. The incarcerated Maoist faction reached the same conclusion through a historical materialist reasoning. Combatting repressive legislation and requesting amnesty for all political prisoners became a tactical move for liberating society from exploitation. The first step towards that goal  would be to improve the situation of the prisoners.

Combatting repressive legislation and requesting amnesty for all political prisoners became a tactical move for liberating society from exploitation.

A main activity of the ICSHRT was to sensitize the public about the prisoners’ humanitarian situation and collect money for their support. It furthermore challenged the Tunisian state’s rhetoric about its democratic nature and need to defend itself against extremist attacks. This was done by publicizing information about state-sanctioned torture, the unfair trial, and inhuman prison conditions.

The group equally published a legal memorandum addressing the court. The main argument was that no material evidence had been found to prove plans for an overthrow of the regime. Writings and pamphlets about class struggles and the destruction of the capitalist state belonged to the realm of freedom of expression just as organizing around political ideas was a matter of freedom of association.

The 1968 memorandum—which would also serve as inspiration for contesting political trials in Tunisia in the 1970s—cited the notion of ‘general principles of law recognized by civilized nations’ from the Statute of the International Court of Justice. These principles referred to those that were not defined by the two main sources of international law, i.e. international conventions and international customary law.

It furthermore referred to the principle that international convention had pre-eminence over national laws. Freedom of association was guaranteed by the constitution and Tunisia had signed the UN Charter obliging members to respect this right. Therefore, the Tunisian law that was disrespectful of this right should not apply. The argument, though, was based on constitutional law, not on human rights law and made no reference to Tunisia’s recent signing of the two covenants.

Outside the court, the group sought to mobilize public opinion in favor of the prisoners. The first public statement of the Committee spoke about the outrage of free men facing the current offenses to justice in Tunisia and urged that truth should be revealed. In this way, it echoed Emile Zola’s ‘J’accuse’ from the Dreyfuss case in the 1890s related to anti-Semitism and falsified court evidence. The Tunisian trial was turned into an ‘affair’ like the Dreyfuss case and emblematic torture cases of the Algeria war. The ICSHRT denounced state reasoning and depicted the prisoners as intellectuals and oppositional figures, not as revolutionaries.

Even though the ICSHRT made several references to the UDHR and its 20th anniversary celebrations, the link from rights culture in the 1960s to today’s human rights framework is much less direct.

The ICSHRT also brokered relations to new groups in search of support. Members went to meet with the nascent Amnesty International (AI), which had been created to bear witness to the private suffering of nonviolent innocents and to demand their release on the ground that such suffering was unjust. In 1968, AI defined its statutes and restricted its work to four UDHR articles concerned with torture, detention, and the freedom of expression and opinion. These objectives coincided with those of the ICSHRT prompting them to lead campaigns for the Tunisians, now framed as prisoners of conscience.

When the prisoners were released in early 1970, following dissensions at the top of the political system and the breakdown of the system of cooperatives, the ICSHRT ceased its work. In the 1970s, new political trials took place and the new Tunisian Committee for Information and Defence of Victims of Repression omitted ‘human rights’ from its name.

Even though the ICSHRT made several references to the UDHR and its 20th anniversary celebrations, the link from rights culture in the 1960s to today’s human rights framework is much less direct. Several political strategies and objectives were at stake. Its actions were grounded in a multitude of principles for a just society, not necessarily the UN human rights system.

Marc Schade-Poulsen holds a Ph.D. in social anthropology and is a visiting researcher at the University of Roskilde where he is researching the history of Tunisian human rights activism from 1960 to 2011.