The UN undermined both public health and human rights in Haiti

Failing to acknowledge its involvement in the 2010 Cholera outbreak in Haiti, the UN undermined public health norms and violated the human rights standards that it asks countries to uphold.

The United Nations (UN) Peacekeeping Mission in Haiti (MINUSTAH) provided a degree of stability to post-earthquake Haiti. But in late 2010, MINUSTAH brought something else. Nepalese peacekeeping troops arrived to replenish their contingent—but some were infected with the bacteria vibrio cholerae. The troop’s base beside the Artibonite River had substandard sanitation, enabling feces containing vibrio cholerae bacteria to seep into the river. Haiti had no previously reported history of cholera, but the brackish water of the river was an ideal location for the bacteria to thrive. Extreme poverty, millions of displaced living in crowded conditions, poor water and sanitation infrastructure, and a population with no natural immunity ensured that cholera spread quickly in the post-earthquake environment.

Out of the approximately 750,000 people who were infected, 10,000 died. Many experts consider these figures to underestimate the true magnitude of the epidemic. Cholera is now endemic in Haiti, and will continue to infect and kill people for years to come.

The UN initially denied any link to the outbreak. Yet scientists quickly determined that this particular strain of cholera originated from an ongoing epidemic in Nepal. Initial cases were clustered near the Artibonite River. Journalists proved that sewage from the peacekeeping base contaminated the river, and verified that a new round of peacekeepers had arrived on rotation in October 2010. Journalists pressed the UN and other international organizations to identify the origins of the outbreak, but were told such an investigation would detract from efforts to fight the disease. 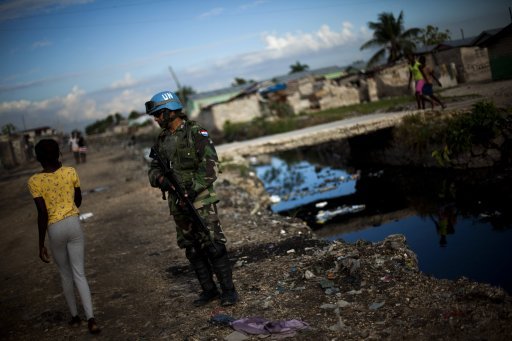 An inescapable feature of globalization is the international movement of pathogens and the spread of disease. Global health agreements promote transparency to prevent and mitigate the consequences of infectious disease outbreaks. Under the International Health Regulations, countries must report public health threats and investigate the origins of outbreaks to ensure that others can take appropriate prevention and control measures. Finding “patient zero” not only focuses early efforts, it can provide important lessons to prevent future epidemics. Yet transparency comes with costs. In the international arena, any hint of an infectious disease outbreak affects trade, commerce and tourism. Public health norms imperfectly attempt to mitigate such risks by outlining the conditions for travel advisories and visa restrictions, and obligating international organizations to support outbreak investigation and control.

In Haiti, the UN faced similar obligations, as well as risks, in their response to cholera.

In Haiti, the UN faced similar obligations, as well as risks, in their response to cholera. The substandard sanitation practices at UN peacekeeping bases clearly violated public health standards. However, their fear of transparency and responsibility was rooted in security concerns. Any link between UN personnel and a disease that caused enormous suffering would put peacekeepers at risk of attack and detract from their efforts to rebuild infrastructure and promote governance in Haiti. Such fears were well founded given Haiti’s complex political and social context, as well as the clear tensions surrounding the role of the international community in post-earthquake governance and aid delivery.

Despite the clear risks, in the long run, the UN would have clearly benefited from transparent investigations into the outbreak, and could have risk-managed any negative outcomes. Its shortsighted obfuscation and failure to accept responsibility was disastrous from a public health perspective. It likely undermined efforts to control the cholera outbreak and led to more deaths of impoverished Haitians, already suffering in the aftermath of a devastating earthquake. It also violated key human rights principles promoted by the organization, such as the right of Haitians to the highest attainable standard of health.

Ultimately, this approach damaged the UN’s credibility, and sent an unfortunate message to other governments, multilateral organizations, as well as transnational entities (multilateral corporations) about how to behave in the face of tragic public health mistakes.

The tireless work of human rights organizations, both Haitian and transnational, to hold the UN accountable and advocate for the victims of the outbreak is exemplary. In the face of a leaked and damning report from UN experts, the organization recently acknowledged that they played a role in the epidemic. But given the immunity enjoyed by the UN, efforts to seek reparations or damages in the Haitian and US court systems have so far been unsuccessful.

The fight continues on the international stage. In a submission to the United Nations Periodic Human Rights Review process, Haitian human rights advocates argue that given the weakness of the Haitian state, MINUSTAH had a special judicial “personality”. This included obligations to protect Haitian’s right to the highest attainable standard of health, as well as to ensure “remedies” for the victims of the cholera outbreak—namely financial compensation. Safeguarding the immunity of the UN, they argue, violates Haitians fundamental right to a remedy.

Acknowledgement by the courts of UN negligence and the harm it caused to the people of Haiti would send an important message. It would remind all organizations working in development, humanitarian and peacekeeping roles that their primary responsibility is to ensure that their actions “do no harm” to recipient populations. The UN’s negligent sanitation practices clearly caused the epidemic and their lack of honesty and transparency complicated and undermined an effective response.

UN officials counter that the organization has been instrumental in efforts to remedy their mistake, leading the fight against cholera through public health messages and treatment. Should these efforts be integrated into any calculation of the harm caused by the UN? The amount demanded in a recent US court system filing—USD 40 billion—is five times the UN’s yearly peacekeeping budget. How would any payout affect ongoing efforts by the UN to address governance, development, and health challenges in Haiti and elsewhere? Does such a ruling have unforeseen negative consequences? Would it spur organizations working in challenging and dangerous environments, such as post-earthquake Haiti, to be more responsible or possibly deter such work?

These are difficult questions, with no easy answers. Human rights advocates deserve credit for forcing the UN to acknowledge its costly negligence and mistakes. And most importantly, for focusing attention on the rights of the Haitian people.

Assistant Professor at the Norman Paterson School of International Affairs at Carleton University.