A new generation of climate cases being brought before Brazilian courts is addressing climate change more directly in an effort to save the Amazon. 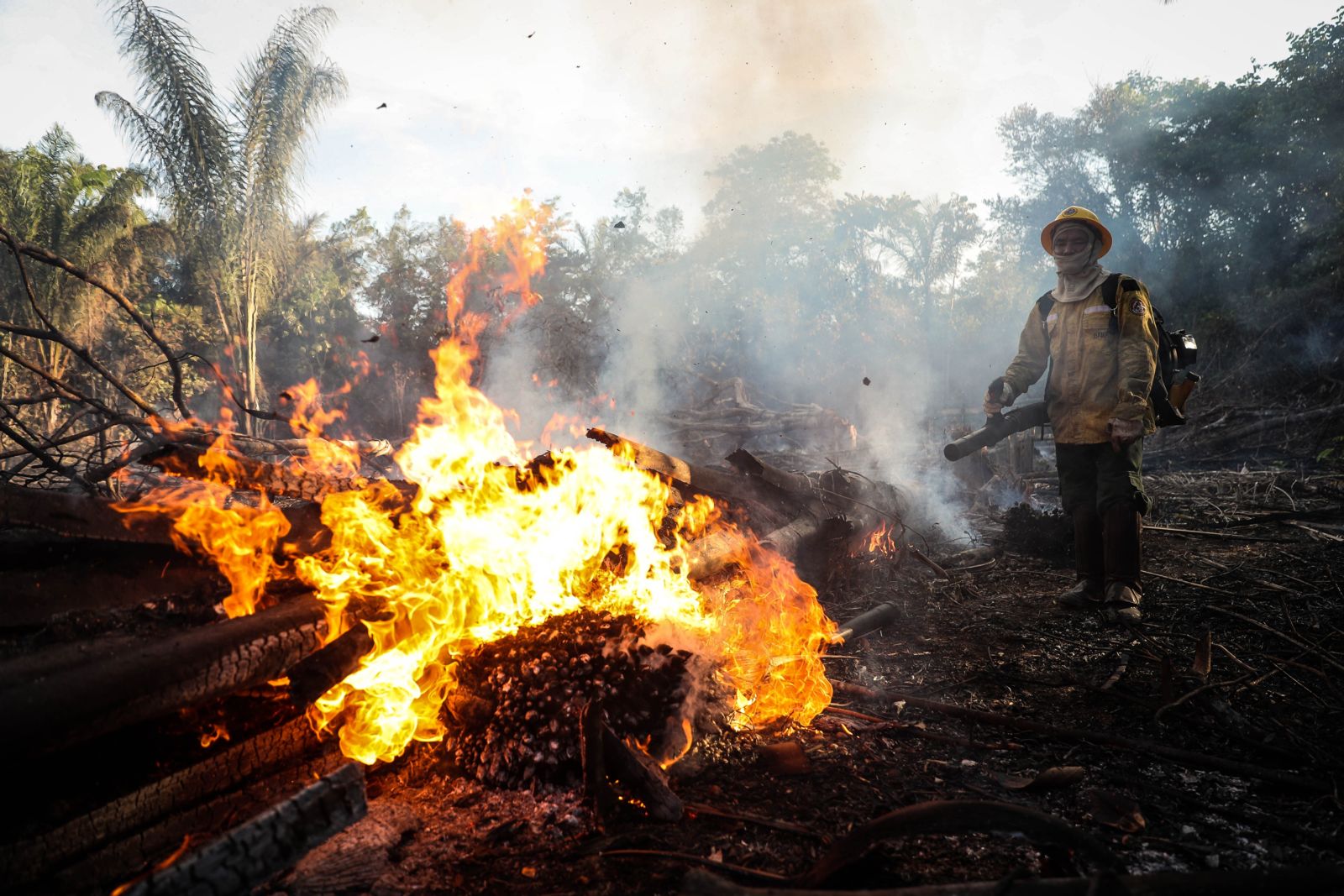 Firefighters from Prevfogo, an Ibama forest brigade made up of indigenous people of the Tenhari ethnic group, participate in the extinction of a fire on an Indigenous reserve located in the south of the state of Amazonas. EFE / FERNANDO BIZERRA JR

The Brazilian Amazon is in a critical situation in the battle for its own survival. A host of damaging activities taking place in the region are threatening its future and that of traditional communities and Indigenous peoples, which depend on it for their subsistence and livelihoods. Illegal logging, mining, and timber harvesting, as well as poaching, predatory exploration of local biodiversity, infrastructure projects, uncontrolled urbanization, and deforestation are just a few examples.

Deforestation appears as one of the most complex and damaging problems facing the Amazon in recent times. Between 2018-2019, deforestation increased 34% in the Legal Amazon (an area covering nine Brazilian states). In absolute figures, it means over 10,000 square kilometers of cleared vegetation. Since the beginning of the official measurement of deforestation in the Amazon, in 1988, such figures have not been seen since 2008. For 2020, some estimates are projecting approximately 15,000 square kilometers of deforestation, a figure last reached 15 years ago, in 2005.

The surge in deforestation rates in recent years has attracted widespread international attention and has prompted even “unusual” actors to express concern, such as international investment funds. Despite the growing pressure, the responses by the government, including the deployment of the army in the region, are yet to translate into concrete results.

Deforestation appears as one of the most complex and damaging problems facing the Amazon in recent times.

In the last decades, the Brazilian justice system has attempted different strategies and measures to tackle the most pressing challenges facing the Amazon. Some of these initiatives are marked by innovation in terms of legal design and strategy. In 2009, after investigations revealed that cattle ranchers located in the Amazon were failing to comply with environmental regulations, the Federal Public Prosecutors (FPP) signed an agreement with large meatpackers, which committed to stop buying cattle from farms linked to illegal deforestation.

More recently, in 2017, the FPP started an ambitious project—the Amazon Protect Project—which has already originated more than three thousand cases against individuals and business enterprises linked to illegal deforestation in the Amazon. The project innovates by using satellite imagery as evidence of illegal deforestation identified in each targeted area. The ultimate goal is to prevent illegally deforested lands to become the object of land regularization programs.

These initiatives are important but still insufficient to face the challenges posed by rising deforestation, which is in many ways associated with the weakening of enforcement mechanisms. As a result of policies enacted in the last year and a half, the administrative and institutional frameworks of climate change and environmental protection in Brazil are on the verge of collapse. The application of environmental fines is stalled, key decision-making bodies have been dissolved and budgetary resources have been severely cut.

Against this scenario, what role can climate change litigation play as a tool to hold public authorities and businesses accountable and to propel the effective implementation of policies to safeguard the integrity of the Brazilian Amazonian rainforest?

Although a few cases have addressed the prohibition of burnings as a harvesting method of sugarcane or the protection of mangroves, until very recently climate change—as a factual or legal issue—was of little relevance in lawsuits dealing with forest protection and land use in Brazil.

However, a new generation of climate cases being brought before the Brazilian courts is addressing climate change in a much more direct manner, either by exploring the science behind the argument that the protection of the Amazon biome is key for achieving global climate goals or by unpacking the legal duties deriving from national and international climate change policies in relation to land use and forest preservation.

These cases have as plaintiffs a variety of actors, which often work together when deciding the most appropriate legal strategies to be pursued in each case.

The Brazilian Public Prosecutors have been playing a central role in several cases. In one of them, the FPPs sought to reinstate a policy enacted in 2009, which was reverted by the current administration last year, on the agroecological zoning (AEZ) of sugarcane plantation. The AEZ is a policy tool which sets out “exclusion zones” for the purposes of public financing and environmental licensing; it is aimed at preventing the promotion of certain commodities, such as biofuels, at the expense of protected biomes and areas, such as the Amazon. In a first decision, the court referred to the precautionary and the “non-retrogression in environmental affairs” principles, and to the lack of supporting technical studies, to reinstate the 2009 policy prohibiting sugarcane cropping in the Amazon.

In another example of a case initiated by the Public Prosecutors, an appeal’s court reverted, in May 2020, a lower court’s ruling of April 2020 which ordered Brazilian federal environmental agencies to create inspection units in ten of the most critical areas of deforestation in the Legal Amazon (“hot spots”). The FPPs appealed the decision of the second instance court.

NGOs have also been active in the use of the judiciary to safeguard the Amazon and the traditional communities living therein. A lawsuit filed by Instituto Socioambiental, Greenpeace Brazil and an association of environmental prosecutors sought to revert a measure by the Brazilian federal environmental protection agency (IBAMA) which would ease the requirements for the export of timber. The lower court denied the request for an emergency injunction, but a final decision is still pending.

In June 2020, four political parties filed two lawsuits directly with the Brazilian Supreme Court, both addressing the suspension of the activities and deactivation of the governance bodies of two financial instruments of climate policy, the Climate Fund and the Amazon Fund. In both cases, the Supreme Court invited experts such as scientists, scholars, activists, climate economists, businesspeople, as well as politicians, to orally present their views in public hearings which are to be held in September and October, respectively.

The Brazilian Amazon is facing a critical juncture which will define its future, with climate and social repercussions that will be felt across all levels: local, regional, and global. At a time when international observers are calling for the International Criminal Court (ICC) to be alerted of potential crimes against humanity against Indigenous peoples’ in Brazil, the mobilization of climate change litigation, in its more direct dimension by local actors, is a demonstration of its relevance as a new legal strategy and tool to safeguard the integrity of the Amazon biome.

Caio Borges coordinates the Law and Climate Program at the Institute for Climate and Society (iCS). He holds a master’s degree in Law and Development from the Getúlio Vargas Foundation and a PhD from the University of São Paulo.