Boycotting the Olympic Games is not enough

The history of human rights efforts around the Games is mostly a history of failure. 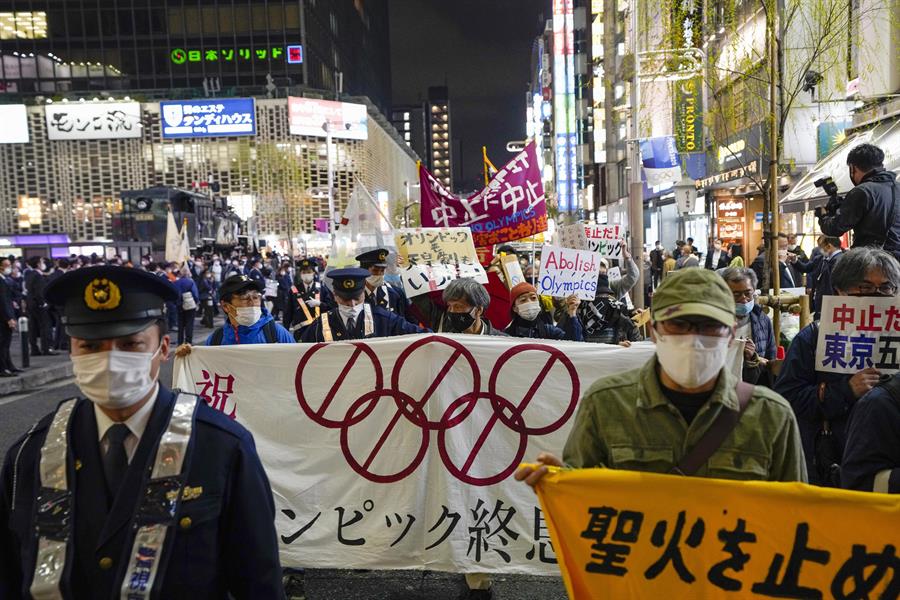 Demonstrators march though Shimbashi streets to protest against the start of torch relay of the Tokyo 2020 Olympic Games in Tokyo, Japan, 25 March 2021 after the torch relay of the Olympics started in Fukushima, northern Japan. EFE/EPA/KIMIMASA MAYAMA

In recent years human rights has emerged as a key pressure point on the Olympic Games. This development is reflected in rising calls to boycott the 2022 Winter Olympics in Beijing, which will begin on February 4, due to human rights concerns. In April, the US State Department mooted, and then retracted, a boycott.

Human rights groups and Canadian, Dutch, and US lawmakers have called for the Games to be moved. Critics say that China’s anti-democracy crackdowns in Hong Kong and brutal repression of Uighurs in the Xinjiang region disqualify the country from the honor of hosting the world’s greatest sporting event.

A range of other issues, including workers’ and athletes’ rights, now routinely draw attention from established groups like Human Rights Watch and new organizations, like the recently founded Centre for Sport and Human Rights.

This new scrutiny could be salutary, but most pressure groups approach the Olympics in a problematic way: they begin by accepting the basic premise that the Games are a force for good and human rights detriments are anomalous. They amplify the propaganda of the Games’ organizer, the International Olympic Committee, that this back-breakingly expensive sports extravaganza promotes global peace, international friendship, the spread of democracy, equality and antidiscrimination, and valuable improvements to host cities.

US Senator Rick Scott’s recent letters about the 2022 Games, for example, contain the typical adulation, referring to the IOC’s “history of standing up to human rights abusers” and “the marvel that is and must always be so perfectly captured by the unity created by the Olympic Games.”

The history of human rights efforts around the Games is mostly a history of failure.

This approach has two pernicious effects. First, it buttresses the egotistical self-understanding of the elites who run the Olympic industry. The International Olympic Committee’s top leadership—the people in charge of a very powerful, very wealthy, and very unaccountable organization—have no reason to question their own inflated and unfounded rhetoric when most of the world goes along with it.

Despite a gaping lack of evidence that the Games are a net benefit to the world, IOC leaders have drunk their own Kool-Aid: they are utterly convinced that they stage an essential festival of peace and friendship. Just as colonial powers justified exploitation on the basis of a “civilizing mission,” the IOC believes that its mythological quest justifies the costs, both direct and indirect, imposed by the Games.

Appealing to the IOC as though reform were a matter of sanding off some flaws around the edges entrenches this harmful mythology. When external actors repeat naïve shibboleths about “Olympic ideals,” they make it less likely, not more, that the IOC leadership will work for real change.

The second problem is that accepting the Olympic mythology whitewashes the reality that human rights violations are built into the fabric of the Games. The staggering price tag of hosting, which tops $10 billion in direct costs, reduces rights observance by depleting public coffers of funds that might otherwise strengthen social services. Direct repression comes in the form of forced evictions, suppression of free speech and assembly, and displacement of unhoused people.

Both historically and in the present, the drive to win medals has often fostered abuse of athletes. The IOC stifles athletes’ right to free speech. And the events are often anti-democratic—take the fact that most Japanese do not want to see the coming Tokyo Games held in the midst of a pandemic.

The history of human rights efforts around the Games is mostly a history of failure. At the 1936 “Nazi Olympics,” calls for a boycott went nowhere. In 1968 the Mexican government, worried about its image as it prepared to host the Games, killed hundreds of student protestors in the Tlatelolco Massacre. The 1980 Moscow Games saw a crackdown on Soviet dissidents. Human Rights Watch succeeded in derailing Beijing’s effort to host the 2000 Games because of the Tiananmen Square massacre, but it merely delayed China’s hosting by a few years. When Beijing did hold the extravaganza in 2008, the outcome was increased repression, flouting the predictions of optimists who told us that the Games would help liberalize China.

Even democratic hosts become more authoritarian when staging the Games. Olympic advocates like to point to the exclusion of apartheid South Africa, forced on a reluctant IOC from 1964 to 1988, and the Seoul Olympics in 1988, when the Park dictatorship may have been swayed in part by the Olympic spotlight to move toward democratic reforms, but these are rare exceptions in a long history in which sports mega-events have abetted both dramatic and more everyday forms of injustice.

Students of the Olympics are well aware of this tattered record, but scholars of human rights are not—partly because until recently, human rights has not been a major lens for assessing the Games. Sport scholars who have long written about hosting costs, corporate greed and corruption, racism, sexism, and abuses of athletes and workers rarely framed these issues using the language of human rights.

As the new history of human rights expands, it could help de-mythologize the Olympics and bring a welcome critical corrective to public perceptions of the Games.

Meanwhile, the boom in human rights scholarship has barely touched the topic of sport, despite the global impact of sports mega-events. As the new history of human rights expands, it could help de-mythologize the Olympics and bring a welcome critical corrective to public perceptions of the Games.

What’s needed is a root-and-branch rethinking that begins with reality rather than fantasy. Starry-eyed talk about how the Olympics promote peace, foster a spirit of global friendship, and combat discrimination should be set aside in favor of an evidence-based calculation of the social, environmental, and financial costs of staging the events and the ways athletes are treated, from early training grounds to the victory podium.

The tradition of moving the Olympics from city to city, each time requiring hugely expensive building projects, must be reconsidered.. The modest measures the IOC has taken to reduce costs are but baby steps in the right direction, and much more scrutiny of the way this tiny elite wields its power and disposes of its billions is needed. Controversies over the Tokyo and Beijing Games offer governments and the UN opportunities to stand up to the IOC, using boycotts to demand entirely new ways of distributing immense revenues from television and sponsorship deals. Old notions that the UN is the right body to oversee the Games should be resurrected: even a poorly accountable and only partially transparent intergovernmental organization is better than a tiny and entirely unaccountable clique drunk on its own arrogance.

The rise of human rights pressures at the Olympics is a step in the right direction. The risk is that in underestimating the task at hand, human rights efforts will entrench rather than uproot a foundation that is deeply problematic.

Barbara Keys is a professor of history at Durham University. She is the author of Reclaiming American Virtue: The Human Rights Revolution of the 1970s and the editor of The Ideals of Global Sport: From Peace to Human Rights.