When the EU awarded a large grant to Alice Nkom for her work defending gay people in Cameroon it was attacked for encouraging illegal activity. Here Nkom describes the reality of trying to find funds for rights work that the government – and most people in Cameroon  - deplore.

Ten years ago, some gay French friends were visiting Cameroon and I found myself advising them to be careful. Homosexuality is illegal in Cameroon, as it is in much of Africa, and the state is quick to crack down on anyone suspected of same sex activity which can lead to a five year prison sentence.

But I am a lawyer. I trained in France and had been practicing as a commercial lawyer since 1969, and working on human rights issues as well, defending victims of police violence, that sort of thing. As I talked to these visitors, I thought, I can’t just warn people about the risks for gay people here.

So in 2003, I set up my organization, the Association for the Defence of Homosexuality (ADEFHO) to work towards the decriminalization of homosexuality in my country. 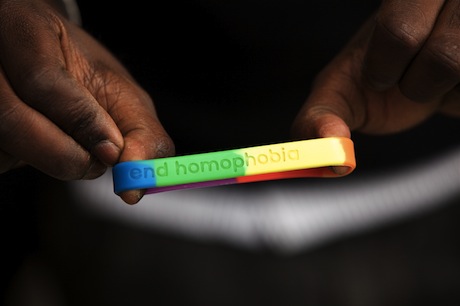 The government sees homosexuality as a serious crime and society in general views it as an abomination in religious terms (most people here are Catholic). Homosexuality is a very sensitive subject – no one wants to finance what they see as a crime. So there was little possibility of any local funding to support my work. Instead, the state has portrayed me as an enemy of the president, meaning hardly anyone wants to be even remotely associated with me let alone donate money to support my work or the promotion of rights for homosexuals. I receive constant death threats and any volunteers who work for me soon have to stop because they too receive threats and find themselves ostracized by society.

The main costs of my work are the body guards I pay US$100 a day to protect me and the cost of appearing in court, processing paperwork for the cases I defend and traveling to defend cases in the more remote parts of the country.

At the moment, I am defending 10 people in prison and 12 who are facing prosecution. Then there are all those who I have helped to get out of jail or avoid it. Most of them cannot get work, have health problems, need protection from attacks and have no income. I can’t just abandon them once the legal work is done.

There are 20 million people in this country and 10 to 12 per cent of those are homosexuals. I am the only person providing legal counsel for these people. I do this work full time now but I still simply cannot defend them all.

I no longer have an income, because I don’t have time for my commercial work, so my family are housing and feeding me and funding some of my work.

What about foreign funding, you might ask? Well. It’s not been easy to get, partly because I simply don’t have the time to do fundraising and I don’t have anyone who can do it for me. But I have been gradually raising the profile of my work by appearing in international media and in recent years, now that I am well known for my work, foreign funding is starting to come in.

In technical terms, the government has made it as hard as possible for me to apply for international support. I forced the state to license my organization in 2003 by arguing, through the courts, that Cameroon has signed international conventions on human rights which oblige it to respect people’s private lives. That is the basic argument on which I hope, eventually, to decriminalize homosexuality here.

But the government then failed to provide the paperwork that shows my organization exists and is recognized by the state. Most foreign governments and organizations have their bureaucracy. They need those administrative papers, understandably, before they can sign off any funds.

I managed to get a two year grant of Euros 300,000 from the EU in 2010. When the news came out that I was receiving this money from the EU, an official from Cameroon’s Communications Ministry suggested on French television that I could be arrested for ‘crimes against law, sovereignty and independence”. Anti-gay groups in Cameroon called on the government to block the transfer of the funds but they could not. I had applied for the grant through a different organization, SID’ADO (Youth against HIV and AIDS), which has the right paperwork because its focus is on health (often of gay people) not on legalising homosexuality. The EU accepted that this was the only way a grant could reach me.

We have also received about US $5000 sent by an NGO through Western Union.

That’s the only foreign funding we’ve had so far.

In a way though, we have achieved a lot even with very little funding. After a decade doing this work, if you only fight the legal battles, you may slowly protect a few people. But if you want to bring about a real change, you have to play every trick you’ve got and you have to be able to communicate.

More than my legal work, I think my public image is what is going to help force people to talk about this. Most people in this country don’t know that homosexuality exists. And NGOs in general have only been allowed in Cameroon since 1990. So there is a lot of educating to do about basic human rights. With the help of some friends in the media here, I appear on TV shows. It is illegal to promote homosexuality so they cannot openly invite me to discuss my work. Instead they invite me to speak on some other legal technicalities and then once I’m on air I start going on about gay rights and no one can stop me.

I have also had more and more coverage abroad, with the French station RFI and with the BBC. That forces local media to cover what I’ve said abroad. A radio station that talks about human rights here would push things forward faster than each of my legal courtroom battles can.

It will be decades before there is a big enough shift in public opinion for me to have financial support from within my own country. At the moment I feel like I’m fighting with bare hands against a huge state machine. But recent international support will allow me to keep going. I have had small victories that make me feel that eventually the international human rights norms will overcome the national government’s position. A lot of people, including magistrates and people in government, are now saying to me, in private, that they understand better the issues around homosexuality and they simply knew nothing about it before. It has helped too that the new pope has said that homosexuals should be tolerated.

This article was ghost written for Alice Nkom by Sophie Arie

Alice Nkom is a Cameroonian lawyer, well known for her advocacy of decriminalization of homosexuality in Cameroon. She is the only lawyer defending those jailed or prosecuted in her country for same sex activity. She studied law in Toulouse and has been a lawyer in Douala since 1969. At the age of 24, she was the first black woman called to the bar in Cameroon.