There is a major pitfall in assuming that other countries simply need to “catch up” through an expansion of SOGIE rights frameworks. 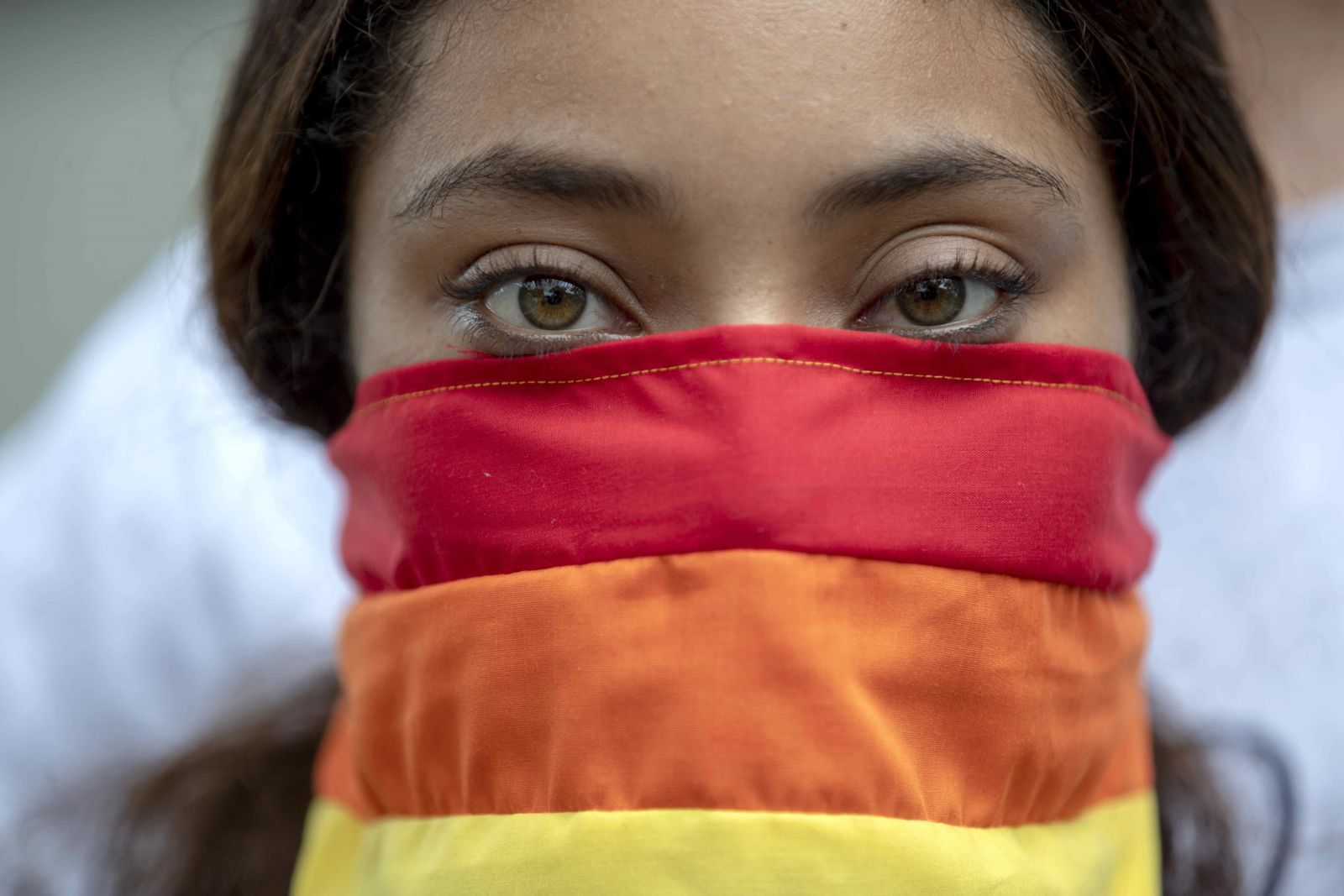 A woman who covers her face with the rainbow flag participates in the LGBT Pride march at the Central American University (UCA), in Managua (Nicaragua).  EFE / Jorge Torres

LGBTQ+ and SOGIE (sexual orientation and gender identity education) rights have recently reached a threshold of international attention, provoking widespread resistance from many governments, IGOs, and socially conservative and religious movements. This progress, and the negative reactions to it from within many countries, has resulted in what I call “homocolonialism”: a political process through which LGBTQ+ human rights are deployed and resisted.

July 2016 saw the appointment of the UN’s first dedicated human rights official for LGBTQ+ and SOGIE issues, a direct result of the 2012 report Born Free and Equal. These rights remain contentious at the UN but have gradually expanded across many countries since the 1990s, although the European Union (EU) remains the only intergovernmental organization to incorporate SOGIE within its human rights framework. Furthermore, the promotion of LGBTQ+ rights has become part of the official foreign policy of many within the EU, such the Netherlands, as well as countries like Canada and the UK. It may seem that the global acceptance of LGBTQ+ rights is on the horizon. Indeed, LGBTQ+ political organizations such as ILGA (International Lesbian, Gay, Bisexual, Trans, and Intersex Association), Western governments that now promote LGBTQ+ rights internationally, as well as inter-governmental bodies such as the UN Human Rights Council, often portray this recent emergence of international rights strategies as the logical next stage in the historic expansion of LGBTQ+ protections. At the level of everyday experience, it also makes sense—we have gone from complete social stigma and invisibility to increasing public visibility and rights over the course of a few decades in many countries.

There remains, however, a global divide on the acceptance of LGBTQ+ rights and identities, with many non-Western countries seen as lagging behind (see here also).  There is, I suggest, a major pitfall in assuming that other countries simply need to “catch up” through an expansion of SOGIE rights frameworks. An approach that is based on the sense of inevitable or logical progress of the current understanding of SOGIE could actually prevent LGBTQ+ human rights frameworks from serving as effective equality resources where sexual diversity is yet to be culturally and politically normalized. I describe this danger as one of homocolonialism.

First, as in the UN report, LGBTQ+ rights are conceptualized as universal, implying a trans-historical and trans-cultural understanding of sexual identities and their social regulation. In opposition to this framing, the internationalization of LGBTQ+ human rights is criticized by many governments, often in alliance with conservative/religious social movements, as being based on Western experiences of both the formation of LGBTQ+ identities and the non-traditional organization of gender relations, leading to a framing of LGBTQ+ rights as a neo-colonialist imposition from outside.

Homocolonialism thus represents a dilemma for LGBTQ+ rights by potentially replaying the neo-colonialism of Western politics in adopting Western understandings of sexuality for international rights. This is evident in the UN, EU and foreign policies of those countries that both promote LGBTQ+ rights and provide refugee pathways for LGBTQ+ peoples.  Effectively, the rights are assumed to “attach” to sexual identities that are public (or need to be to claim those protections), individual, and stable across biography, time, and location. This universal characterization of sexual diversity is being deployed in the space of international relations and operates dialectically and definitionally towards “traditional” cultures (less economically “developed” countries, the Global South, Muslim countries, the African continent, to name the primary targets) but also towards the originating space of the West.

Homocolonialism represents a dilemma for LGBTQ+ rights by potentially replaying the neo-colonialism of Western politics in adopting Western understandings of sexuality for international rights.

The West is provided with a reassurance of its civilizational superiority through the presence of citizenship rights allied to increasingly normative versions of homosexuality (such as same-sex marriage and increasing public visibility in media and culture) which are then contrasted with their absence in non-Western communities worldwide, including minority immigrant groups in the West, creating “others” at home and abroad: a classic colonial tactic of creating a respectable Western norm and foreign others. This homocolonialism then encourages local and transnational cultural resistance to LGBTQ+ rights by reinforcing the notion that they are “Western” and, therefore, somehow incompatible with anti-colonialist politics and cultural autonomy.

This framing of resistance is evident in political campaigns from across the globe, within many minority immigrant communities in the West, various Caribbean nations, to Poland, Russia (including Chechnya), Uganda, Iran, to name but a few examples. Within this homocolonialist dynamic, both sides of the divide accept the premise that LGBTQ+ rights are Western, but one side sees it as colonialist, making it profoundly difficult to argue for a rights framework that both recognizes and protects the universal rights of LGBTQ+ individuals and recognizes differences in how sexual identities are understood and socially regulated. Any deployment of LGBTQ+ rights must, therefore, acknowledge this dynamic, particularly when the very deployment could provoke a focus on LGBTQ+ individuals that harms their ability to stay safe from harassment violence and death.  See, for example, the recent backlash against raising rainbow flags at the embassies of Canada and the UK in Iraq in May 2020.

How then, do we proceed in practical terms to operationalize this complex conceptual understanding?  In previous work on Muslim cultures and homosexualities, I proposed a “homocolonialist test” for Western LGBTQ politics as a way of thinking through how rights strategies could either reinforce or disrupt the equation of sexual diversity with the West, and thus undermine or support attempts to identify LGBTQ issues with a local, rather than neo-colonialist agenda. The main encouragement of the “test” is to be reflexive about biases and assumptions in the promotion of LGBTQ+ rights by the West. For example, do organizations assume that there can or should be a “model” of LGBTQ+ rights based on Western experiences?  Perhaps it is better to learn first from local groups what the national specificities of LGBTQ+ movements and identities have been, and what opposition they face across cultural and political realms.  For example, we have seen rights advances for trans* identities in South Asia in the last few years, while anti-homosexual laws and attitudes have often remained. This is the reverse of most Western experiences and can only be explained by local traditions of hijra or third gender in South Asia, that has “translated” the Western idea of trans* into local identities that are seen as culturally resonant and authentic, rather than “foreign”.

The main encouragement of the “test” is to be reflexive about biases and assumptions in the promotion of LGBTQ+ rights by the West.

Furthermore, resistance to LGBTQ+ varies from political discourses to legislation and organized violence. Across all these realms it is important to assess whether a demand for LGBTQ+ rights is an enabling resource for local movements or whether it creates disabling levels of resistance.  Perhaps local groups would rather focus on community building through services and clinics that focus on sexual health or online community platforms, rather than publicly identify themselves through rights claims that might provoke a harsh response, cloaked in homocolonialist outrage.  While this certainly echoes debates in development on service-based versus rights-based approaches, it may be that one of the most effective areas an outside government or NGO can work in is to build the infrastructure for human rights overall, rather than focus on LGBTQ+ specifically.

Many non-Western nations and groups have led the recent activism on LGBTQ+ rights internationally, but too often, these rights claims are caught up in a regressive dynamic because they are seen as imposing a Western view of sexual identities. Crucially, we must move towards some decolonial reformulations of the concepts of sexual diversity, if such rights are to be a genuine resource for equality. Otherwise, they are held hostage by this homocolonial dynamic that disempowers both universal LGBTQ+ rights and local, non-Western, versions of sexual diversity.

Momin Rahman is a professor of sociology at Trent University in Canada. He has written extensively about queer Muslims and has presented his research at private meetings at the UN Human Rights Council and with the Canadian government.