Resentment of the west is making emerging powers hold back when they could be using their strengths and experiences to challenge the world’s abusive regimes.

Emerging powers India, Brazil and South Africa have all campaigned to become permanent members of the UN Security Council. For one year in 2011, the world had a chance to see what a Security Council including these emerging powers would look like, as all three states were on the council together for the first time. And the record showed? More of the same. Rather than reshape the Council, these Southern leaders seemed content to settle for business as usual, and failed to make a significant mark. They seemed unable or unwilling to harness their historical experiences to act as leaders in combatting today’s abusive regimes.

What will it take to change that dynamic? One might have thought that post-apartheid South Africa would come out swinging against oppressive regimes elsewhere, as would Brazil and India given their experiences with dictatorship and colonialism. Think again. The foreign policy elite of all three countries is deeply suspicious of western governments’ double standards and inconsistent approaches toward abusive governments. Their leaders may still be debating what they’d like their foreign policy to be, but they are clear that they want it to be different from the west’s.

This quest for a new role is fueled by resentment over past domination and exploitation, which makes setting a course distinct from the west politically advantageous. Emerging powers have played off this tension in their public statements, with former Brazilian President Lula arguing, for example, that Brazil’s foreign policy had been “characterized by intellectual subordination and oriented towards the United States and Europe,” and that “even after gaining independence in 1822, the country continued to be colonized.” Similarly, South Africa’s President Jacob Zuma has said that his country’s foreign policy is founded on “a rejection of colonialism,” and former President Mbeki railed against a “new imperialism” following the Libya intervention. 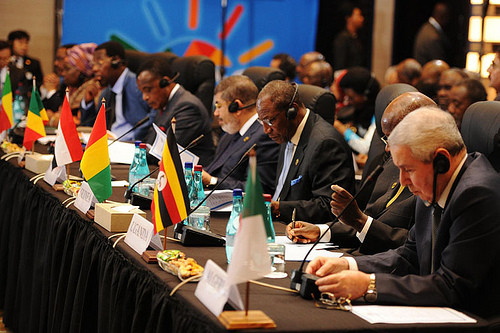 The reluctance of emerging powers to endorse international condemnation on human rights is of course also sometimes a product of their own self-interest. They fear they might be next on the list, be it for India’s record in Jammu and Kashmir, or Brazil’s respect for the rights of indigenous peoples in the context of development projects such as the Belo Monte hydroelectric plant.

This combination of factors leads the emerging powers to adopt positions that at times seem at odds with the presumed values or aspirations of a vigorous democracy. But even if this anti-western perspective is entrenched for the moment, there is room for these governments to play a positive human rights role where the west’s support has been inconsistent or lacking-- in places such as Bahrain, Afghanistan, Iraq or anywhere else where western interests trump principles. A case in point is the Brazilian initiative, launched in the wake of NATO’s Libya intervention, focusing on the responsibilities of those who undertake military operations (“responsibility while protecting”). Born out of anger at NATO’s perceived overreaching in Libya, this concept could spur needed debates about the transparency and accountability of Security Council-authorized military action. By setting a new course, neither submissive to developed countries nor reflexively opposed, the emerging powers could help break down the “west vs. rest” dynamic that now helps to shield certain repressive governments.

Emerging powers could also bring their own experiences as less-developed countries to critical human rights debates about access to healthcare, protection of the environment, or the fight against poverty. Their experience, if properly interpreted, could inform discussions about the importance of successfully integrating rights protection into development strategies.

There are also precedents for the emerging powers playing key positive roles in advancing human rights standards through thematic work. South Africa led a historic effort at the UN Human Rights Council in 2011 for the adoption of a resolution on violations based on sexual orientation and gender identity; Brazil played an important role on the sexual orientation resolution too, and has been a strong advocate as well on the right to health. These thematic issues are gateways for progress on a range of issues, but such approaches should be seen as complementing, not replacing, action to address abuses by particular governments.

It remains to be seen, however, what tools emerging powers will be willing to employ to confront abusive governments, and their current mantra of “cooperation, not condemnation” is not sufficient. While the west would do well to explore less blunt instruments at times, emerging powers should recognize that cooperation on human rights requires a willing partner, not merely a government looking for a rhetorical tool to avoid pressure over its human rights abuses. The effectiveness of cooperative approaches depends in part on the prospect that failure to cooperate will have consequences.

Towards a new emerging powers role

So what will it take to convince emerging powers to promote human rights more consistently and helpfully in their foreign policy?

First, emerging powers should be held more accountable for the shortcomings of their foreign policy on human rights, particularly by their own civil society and press. In those countries, public opinion tends to focus on the large range of domestic human rights issues that continue to demand attention, and foreign policy tends to be a focus mostly for elites. But groups that have taken up this challenge, such as Conectas in Brazil and the Cairo Institute for Human Rights in Egypt, have seen that calling the government to account for its position on human rights issues can yield results. One effective tool has been to generate media attention to human rights policies, exposing the gap between stated commitments to human rights and the application of those principles in foreign policy. International groups like Human Rights Watch can contribute to those efforts, by helping to provide factual background on distant countries and by linking national advocacy to global efforts.

Second, other powerful states in the global south could provide effective checks on the human rights foreign policy of the emerging powers, a small club in which only India, Brazil, South Africa, Indonesia, and sometimes Nigeria and Turkey are usually included. As understandable as the focus on these most-significant powers is, it obscures the considerable influence of other regional actors, such as Mexico, Argentina, Malaysia, Thailand, Egypt or Senegal, for good or ill. Mexico, itself an emerging arms exporter, pushed for a strong Arms Trade Treaty and led efforts to adopt the treaty over the objections of Iran, North Korea and Syria, for example. Moreover, regional blocs often adopt positions on international issues by consensus, giving even smaller states an ability to influence that policy. For example, Mauritius, the Maldives, and Costa Rica have all shown the ability to punch above their weight by pressing their regional groups to respond more strongly to human rights violations.

Third, western powers can themselves make it easier for emerging powers to take up human rights concerns by addressing glaring inconsistencies in their own approaches to human rights foreign policy. For example, the exceptionalism in US foreign policy that shields such allies as Israel from criticism and accountability for their human rights abuses provides a ready excuse for states that want to avoid promoting human rights elsewhere.

Fourth, engaging with emerging powers on human rights policy may require breaking with some traditional strategies for addressing human rights violations. For example, western powers should be willing to take a back seat or work patiently in coalition with partners from the global South, so human rights initiatives avoid the stigma of “western imposition.” In addition, western powers should be willing to engage more helpfully on economic and social rights, where western support has been limited, and to recognize the significance of steps to reduce poverty—a step that some western countries have eschewed for fear that it will lead to calls for more economic assistance. Moreover, western human rights advocates should support regional institutions such as the African Commission on Human and Peoples’ Rights and give their engagement on key issues more prominence, recognizing that they can play an important role in bolstering the legitimacy of human rights initiatives.

What could the results be of a more principled engagement on human rights worldwide by the emerging powers? At a minimum, their involvement would demonstrate that human rights concerns are universal, not just the product of “western agendas,” putting more pressure on governments that rely on that excuse to avoid addressing serious human rights abuses. If they played their cards right by confronting with equal vigor abuses in developing and developed states, their more principled approach could make the emerging powers a force to be reckoned with, including on the Security Council.

Peggy Hicks is Global Advocacy Director for the same organization and has specialized expertise on the United Nations, particularly UN peacekeeping and the Balkans.