Impunity in Mexico is not accidental, random, or involuntary. Instead, impunity results from a chain of actions taken with the express purpose of undermining investigations.
By: Patricia Cruz Marín & James Cavallaro & Alejandro Anaya Muñoz 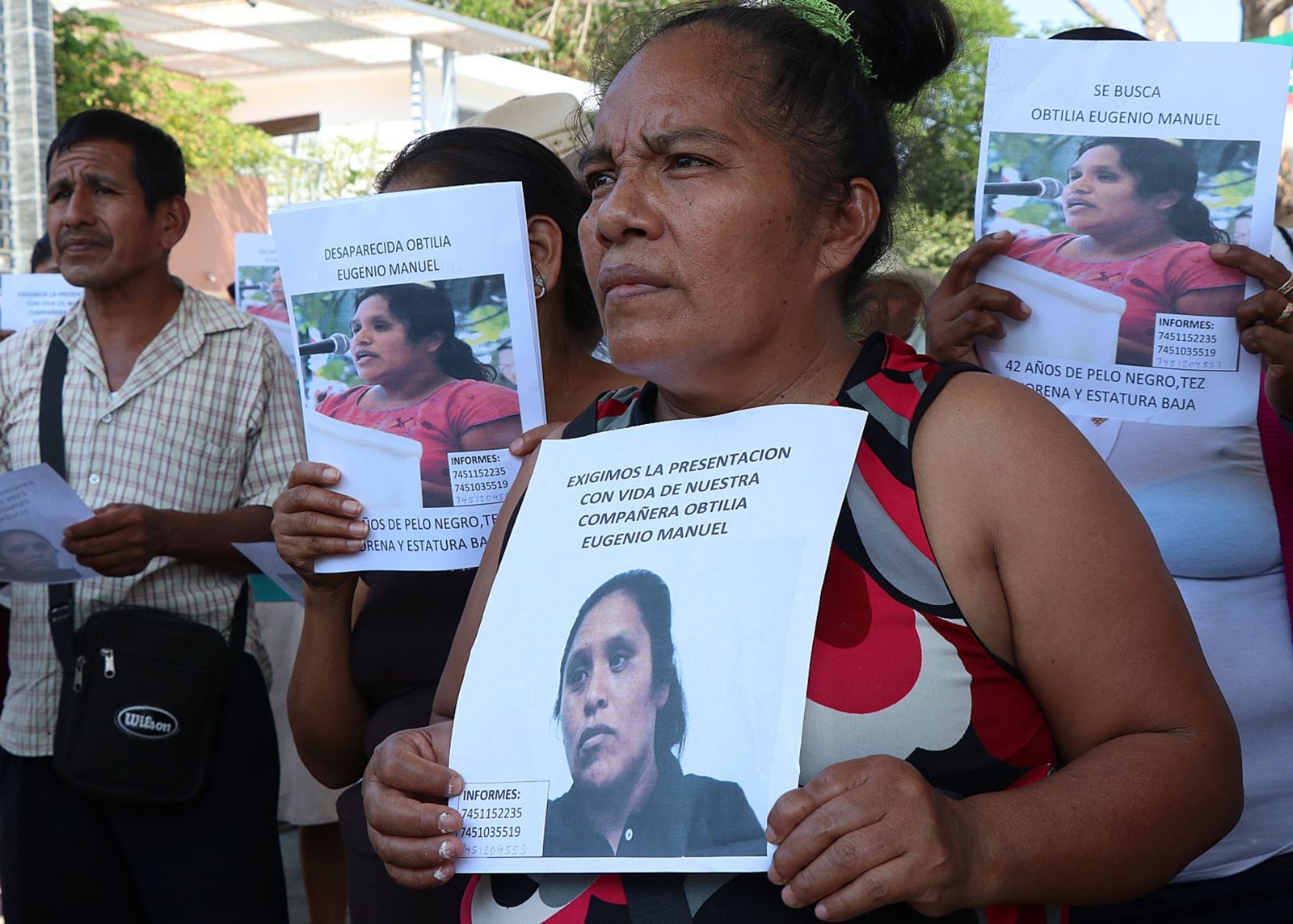 Members of the Municipal Community Council of Ayutla search for their companions in the municipality of Ayutla, in the state of Guerrero ,Mexico. The Mexican state of Guerrero offered a 2 million pesos ($ 103,734) reward for data to locate activists Obtilia Eugenio Manuel and Hilario Cornelio Castro, who disappeared in February 2019. EFE/Francisca Meza

Mexico faces a grave human rights crisis. Extrajudicial executions, forced disappearance, and torture, among other violations, occur in a context of virtually absolute impunity. Over a period of four years, prosecutors’ offices managed just 35 convictions nationally in a universe of more than 82,000 investigations of forced disappearance in Mexico. That’s a .04% conviction rate. Every day, on average, two clandestine burial sites teeming with unidentified corpses are discovered in Mexico.

Similarly, the levels of violence reported in executions are staggering: during the first four months of 2021, an average of 97 people were killed every day. Although available data do not distinguish homicides from extrajudicial executions, scholarly research has consistently identified an unusually high “lethality index” associated with the actions of armed forces in Mexico. Furthermore, the systematic practice of torture, extrajudicial executions, femicides, and abuses against human rights defenders in Mexico continue at worrisome levels; many are  rising. Despite the seriousness of the human rights crisis in Mexico, impunity levels reach 99%.

We contend that impunity cannot be explained by a lack of capacity or budgetary limits alone. Through detailed documentation and analysis of eleven exemplary cases of brutal rights abuse between 2008 and 2019 across six states in Mexico in a recently published report, we identify mechanisms of active impunity to demonstrate that impunity in cases of serious violations results from structural interests that manipulate the application of the law. In other words, impunity in these cases is not accidental, random or involuntary. Instead, impunity results from a chain of actions taken with the express purpose of undermining investigations.

These active impunity mechanisms include: i) alteration of the crime scene and addition of false evidence; ii) official refusal to accept victim’s reports or to initiate investigations; iii) intimidation and threats to victims; iv) threats to family members of witnesses, including through the presentation of false charges against them or the victims themselves; and v) refusal to investigate in cases involving armed forces or narco political figures.

A few examples help illustrate the dynamics of active impunity. In the May 2015 killings of 42 civilians in Tanhuato, Michoacán, authorities altered the crime scene and manufactured evidence to support the false narrative that military forces had acted in self-defense. Three women who witnessed the massacre were tortured and threatened with sexual violence if they refused to recant their statements. Similar mechanisms of active impunity were deliberately employed to alter the crime scene or intimidate witnesses in the execution of 22 civilians in Tlatlaya, and the murder of journalist Miroslava Breach in Chihuahua. The cases documented in the report lead to the same conclusion: impunity in Mexico is not explained by a lack of capacity alone; rather, it results from a complex structure of interests that actively work to sustain this impunity.

To begin to address the human rights crisis facing Mexico, we must come to terms with impunity.

For a successful international commission to work, there should be: i) a robust negotiation phase with  significant social and political domestic support; ii) an international treaty to create the body, requiring Congressional approval; iii) mechanisms to guarantee the independence and autonomy of the commission; iv) an international funding scheme that does not depend on domestic institutions; v) a selection procedure that prioritizes the technical ability, independence and experience of its members; and vi) granting the commission the faculties necessary to comply with its mandate, including the ability to recommend legislative changes for strengthen justice, initiate criminal procedures or facilitate technical assistance to the prosecutor’s office, and the capacity to reach complementary agreements with domestic authorities.

By designing and recommending legal and institutional reforms, initiating criminal proceedings on its own initiative and providing technical support to domestic authorities, an  International Commission Against Impunity would advance justice in specific cases. More importantly, such a commission would promote broader change by destabilizing entrenched criminal interests, thus exerting indirect pressure on Mexico’s ordinary justice system. This, in turn, would serve to erode the complex set of practices and interests that support active impunity.

To begin to address the human rights crisis facing Mexico, we must come to terms with impunity. It is active, not passive. More investigators, more prosecutors and more judges may help, but they will not enable Mexico to break the deadly cycle of impunity. The absence of individual criminal responsibility and corresponding punishment for powerful perpetrators establishes and reinforces an institutional context in which crime and human rights violations are reproduced with minimal resistance, all but ensuring systematic reproduction. Despite the inevitable political obstacles, an international commission is worth the fight. It may well be the lone, viable alternative to break the cycle of impunity supported and nurtured by state agents at all levels  in Mexico.

Patricia Cruz Marín is a Mexican lawyer with degrees from UNAM and ITAM. She has represented victims of human rights violations in Latin America in domestic and international fora. She is currently a JSD candidate at Yale Law School.

James Cavallaro is the co-founder and executive director of the University Network for Human Rights and a visiting professor at Yale Law School. Cavallaro served as commissioner, country rapporteur for Mexico, and president of the Inter-American Commission on Human Rights.