Limitations on fundamental freedoms have been purposely and disproportionately used against activists who have refused to put their work on pause, even when the rest of the world was locking down.

Human rights defenders march in Thailand after a peaceful protester was threatened by gunshots from a mine security officer in January 2021. Photo courtesy of Meredith Veit

Human rights defenders (HRDs) across the world have been exposed to a wide range of dangers and threats—from smear campaigns and harassment to arbitrary detentions, abductions, and assassinations. However, the outbreak of COVID-19 has worsened the conditions for a kind of work that is already extremely mentally, physically, and emotionally  arduous.

As outlined in Front Line Defenders’ most recent annual report, at least 331 human rights defenders were murdered in 2020 (an 8.8% increase compared to 2019).

While certain restrictions have been necessary for containing the spread of a highly contagious virus, severe limitations on fundamental freedoms have been purposely and disproportionately used against activists who have refused to put their work on pause, even when the rest of the world was locked down.

At the onset of the pandemic, Protection International (PI) began conducting research via organisation-wide surveys to evaluate the impact of COVID-19 on the human rights defenders (HRDs) that we work with. PI works principally in 11 countries—Guatemala, Honduras, El Salvador, Nicaragua, Colombia, Brazil, Democratic Republic of the Congo, Kenya, Tanzania, Thailand and Indonesia. Our findings validate what many human rights practitioners had feared would happen: public health measures are being weaponized against HRDs; there has been a rise in both physical and digital threats and attacks; business interests continue to prevail over human rights; political prisoners continue to be detained and neglected amidst the emergency; and the right to defend human rights is gravely at risk.

First, we’ll discuss the most prominently worrying and overarching trend: government’s weaponizing COVID-19 restrictions against their own citizens.

During times of crisis, states lean heavily on law enforcement for the implementation of emergency measures, and due to misinterpretation of government mandates, or sometimes purposefully harsh directives, HRDs and journalists often face the brunt of their brute force. Nearly all PI teams reported that confinement measures have allowed for greater surveillance of defenders.

Administrations who baselessly and sweepingly blame journalists and human rights defenders for the impacts of the pandemic are undoubtedly contributing to the rise in violence against them.

In Guatemala, for example, a staff member described an unusually persistent police presence outside of their home. In Colombia, our team reports that threats against defenders and their activities have increased, as the government excuses authorities who are acting out under the guise of necessity to control the spread of the virus.

Towards the beginning of the pandemic, many states did not clearly delineate that press should be excluded from confinement orders. A year later, journalists and dissidents continue to be targeted, discredited, and censored through the veneer of spreading mis- or dis-information about the virus or the effectiveness of the government’s response. In Tanzania, for example, the late President John Magufuli did not acknowledge that COVID-19 was an issue of concern until February 2021 and two editors of independent newspapers said that “officials had informally told them not to publish material that the government would not like.”

Brazil has suffered a similar fate. President Bolsonaro has denied the legitimacy of the pandemic, and he “accus[ed] the press for the chaos that the country is experiencing to divert attention from his disastrous management of the health crisis,” explains Reporters Without Borders. Administrations who baselessly and sweepingly blame journalists and human rights defenders for the impacts of the pandemic are undoubtedly contributing to the rise in violence against them.

Latin America has historically been the region most riddled with killings of HRDs, and this pandemic year has been no exception. The case of Colombia is particularly disheartening, considering that it not only continues to be the most dangerous country in the world for HRDs, but also that the government’s response to the increase of violence and massacres during the pandemic has been to deploy “militarization” techniques. Strict confinement has limited HRDs’ access to protection networks, routes, and allies, especially those who have limited or no access to the internet. Armed actors have taken advantage of confinement measures to more easily locate and murder defenders. Somos Defensores reported a 61% increase in HRD assassinations during the first quarter of 2020 in comparison to the same period of 2019. According to the Institute of Studies for Development and Peace (INDEPAZ), at least 308 HRDs and social leaders have been killed in Colombia since the initial lockdowns began on 25 March 2020, including 83 in 2021. Many Colombian HRDs have used temporary relocation programs to find refuge, but towards the beginning of the pandemic, many of these programs were suspended due to travel restrictions. Once emergency evacuations started to be coordinated again, Colombia was the top country for HRD displacements in 2020.

The pandemic cannot be used as a pretext to unjustifiably curtail fundamental rights and freedoms.

Protection International Colombia has been working principally with Indigenous communities in the Orinoquía region in the east of the country, which continues to be largely neglected by emergency response and relief efforts. Many Indigenous HRDs are left worrying about basic needs such as health and food supplies, forcing defenders to side-line activities related to protecting their land and the environment. Restrictions on mobility and a lack of connectivity have particularly impacted rural HRDs, especially women. “The already enormous burden of familial and household care that falls on women’s shoulders has increased dramatically. Furthermore, they are more exposed and left vulnerable to domestic violence, since, if there is a cell phone in the house, the man normally has it,” explains Aída Pesquera, PI Representative in Colombia. “All of this notably limits them in the exercise of their human rights work.”

Protection International has been working with local leaders to provide cell-phone data to ensure defenders are able to communicate with their protection networks, provide support to communities by facilitating their access to the internet, as well as carry on with their ancestral self-protection practices. “We support them to move to a place where they can safely connect, and we hold virtual workshops every week on protection,” says Pesquera, “We also provide didactic material that they can use autonomously between sessions.”

While Indigenous groups in Colombia and Brazil were hit hardest by the pandemic, they are not yet on the list of prioritized groups for receiving the vaccine even though roll-out has officially begun. 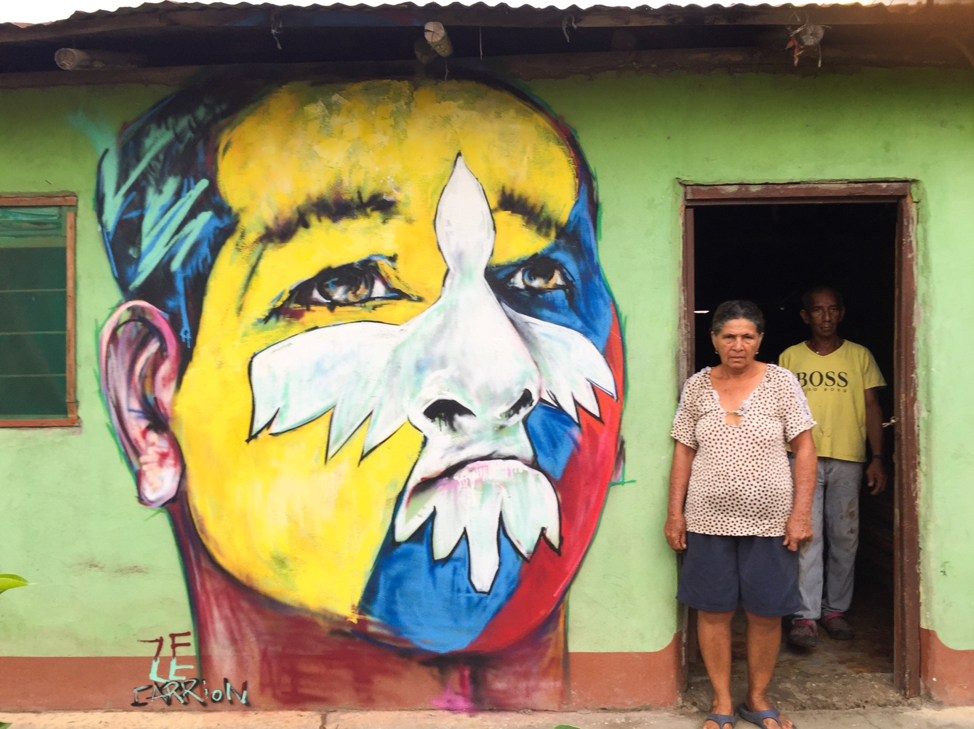 Woman from a rural area of Colombia stands near a mural (2019). Photo courtesy of author

Since we began collecting data, these issues have persisted or even worsened over time. While vaccine inoculation may be on the horizon for some, the reality is that many HRDs are not anywhere near the top of national priority lists for receiving it. We expect that HRDs will continue to work in confrontation with the obstacles listed above for the remainder of 2021, at least.

Human rights groups have been shouting this since March 2020, but we have not yet reached a point where we can stop repeating it: The pandemic cannot be used as a pretext to unjustifiably curtail fundamental rights and freedoms. Governments have no excuse for overtly obstructing the right to defend human rights. One year later, we continue to call on the international community to protect and uphold human rights, especially in times of crisis when they are most at risk of being undermined. Many of us have settled into our routines of the “new normal,” but normalizing these abuses is dangerous. We must continue to speak out. We urge governments around the world to ensure the safety of defenders and to guarantee their right to freedom of expression and their right to defend human rights, even within the context of restrictions that are necessary and proportional.

This article is part I of a three-part series on COVID-19 and human rights defenders. Read part II and part III.