The courts have done much in South Africa to advance human rights and promote equality, but in what remains a grossly unequal society they can only do so much. 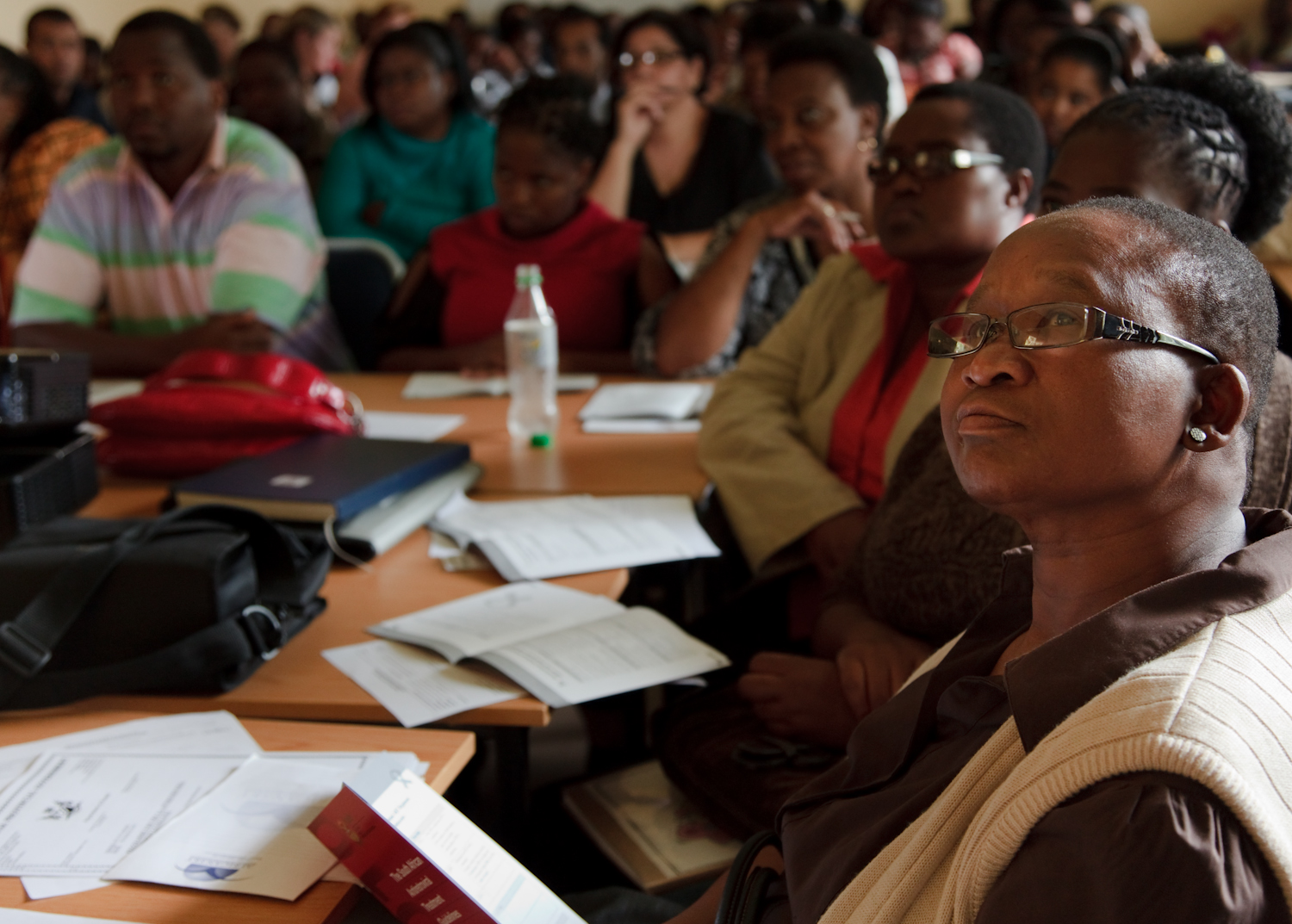 A nurse in Mpumalanga, South Africa listens to the new ART guidelines.

South Africa is the most unequal society in the world, according to a recent World Bank report. Just 1% of the population owns 70% of the country’s wealth while the bottom 60% of the country control only 7% of its wealth. More than half of the population lives below the national poverty line of R992 (about $US70) per month, and this number has increased since 2011. The worst affected groups are black people, the unemployed, the less educated, female-headed households, large families and children.

At the same time, South Africa has been said to have, in Cass Sunstein’s words, “…the most admirable constitution in the history of the world”, and with courts willing to imagine creative ways to enforce it. Civil society has used strategic litigation as one strategy to pursue social justice. But what does it mean to litigate in a society where both of these things are true, to harness the gale-force power of the Constitution in a sea of poverty and human rights violations?

South Africa today is the perfect storm for strategic litigation: a legal system that provides an ideal institutional framework to litigate, and conditions of life for the majority of the people that generate disputes and demands that become major cases.

The 1996 Constitution revolutionized the procedural and substantive law in ways that greatly facilitated strategic litigation. In terms of procedure, the courts were given wide rules to allow public interest cases and class actions, and flexible remedial powers. The courts have used these powers to facilitate access to courts and to grant far-reaching and creative orders. They have struck down unconstitutional laws and executive action and required the state to develop plans to remedy systemic rights violations under judicial or independent supervision.  The courts also developed a rule against imposing costs on losing parties who engage in good faith constitutional litigation, to avoid the chilling effect of adverse costs orders. The substantive changes were even greater, including introducing a justiciable Bill of Rights and a robust, justiciable principle of legality (derived from the rule of law).

This framework was laid down in a country emerging from decades of conflict in the struggle for freedom from apartheid and colonial rule. The Constitution—unlike many other constitutions concerned primarily with maintaining stability and limiting the power of the state so as to facilitate individual liberty—recognized the need for structural, societal transformation. Black people, women, people living in rural areas, people living with disabilities and sexual minorities remain marginalized across the public and private spheres of society. And in 1994 when democracy was achieved, South Africa inherited a raft of discriminatory laws and practices, which the Constitution was written to confront and dismantle.

Strategic litigation was taken up as one strategy for social change. In 25 years of the Constitution’s existence, courts have decided hundreds of such cases. The courts struck down the death penalty; protected and strengthened LGBTQ rights including marriage equality; and enforced socio-economic rights to housing, health, water and education. In the famous Treatment Action Campaign decision, the Constitutional Court ordered government to roll out antiretroviral drugs to prevent mother-to-child transmission of HIV/AIDS, helping to end South Africa’s awful period of AIDS denialism. Today, South Africa has the world’s largest public antiretroviral treatment programme. More recently, in a series of education cases, the courts have ordered government to eradicate hundreds of unsafe mud schools, ensure all school infrastructure is safe and adequate, supply teachers, textbooks and school furniture and provide transport to children at rural schools having to walk long distances. The reach of the Bill of Rights has been extended to private actors. Confronting the legacy of the exploitation of black mineworkers, a court certified a class action by ex-miners with the disease of silicosis against 32 companies comprising effectively the entire gold mining industry—culminating in a multi-billion Rand settlement. These examples, and many hundreds of similar cases, were brought by civil society organisations, especially the vibrant public interest law sector.

Harnessing the robust principle of legality derived from the rule of law, the courts have also done what would be unthinkable in most countries—effectively removed from office the head of public prosecutions, the head of the public broadcaster, the head of crime intelligence, and another head of public prosecutions, and ordered a sitting president to pay back millions in public money spent on upgrades to his private home. These cases were mainly brought by opposition parties (to the left and the right of government) and watchdog NGOs. Many see the courts as having provided a vital bulwark against attempts by people associated with former President Zuma and the billionaire Gupta family to capture the state and facilitate looting of public resources.

But there is, rightly, growing impatience at the slow pace of structural change and lingering patterns of racialised and gendered inequality. Even comparatively significant gains in the courts can seem like a drop in the ocean. This has resulted in some blaming the Constitution and the courts for the slow pace of change, when the real barriers relate to systemic problems in service delivery by the state and private sector exploitation, all in the context of the legacy of apartheid.

These problems are compounded by the fact that achieving social justice through litigation has its limits because of the nature of the legal process and the capacities of courts. For example, while courts have been willing to enforce positive duties requiring government to provide antiretroviral drugs and school infrastructure, they have not been as willing to impose positive duties to actually provide housing or water to individual litigants, let alone create jobs. These cases highlight the limitations even of successful and relatively far-reaching socio-economic rights litigation to re-make a society.

Undeniably, strategic litigation is a particularly powerful tool for social change in South Africa. It has been crucial in correcting some major policy missteps, unblocking bureaucratic barriers, combatting corruption, injecting urgency and forcing government to prioritise marginalised groups. But there remain real limits to what it can be expected to achieve. Litigation may be one crucial measure, but it is not for courts alone to realize the vision of the Constitution. The Constitution distributes this burden across a carefully balanced system of co-operative government, sharing executive and legislative power among the national, provincial and local spheres. Building a more just society is the task of all parts of the state, civil society and business using every means available to them.

Jason Brickhill is a tutor in human rights law at the University of Oxford, and Research Director of the Oxford Human Rights Hub. He practiced as a public interest lawyer at the Legal Resources Centre in South Africa from 2008-2016, and is the contributing editor of the recent book, Public Interest Litigation in South Africa (Juta, 2018).