This lawsuit not only builds on undisputed constitutional rights, but also argues for a fundamental right to climate stability. 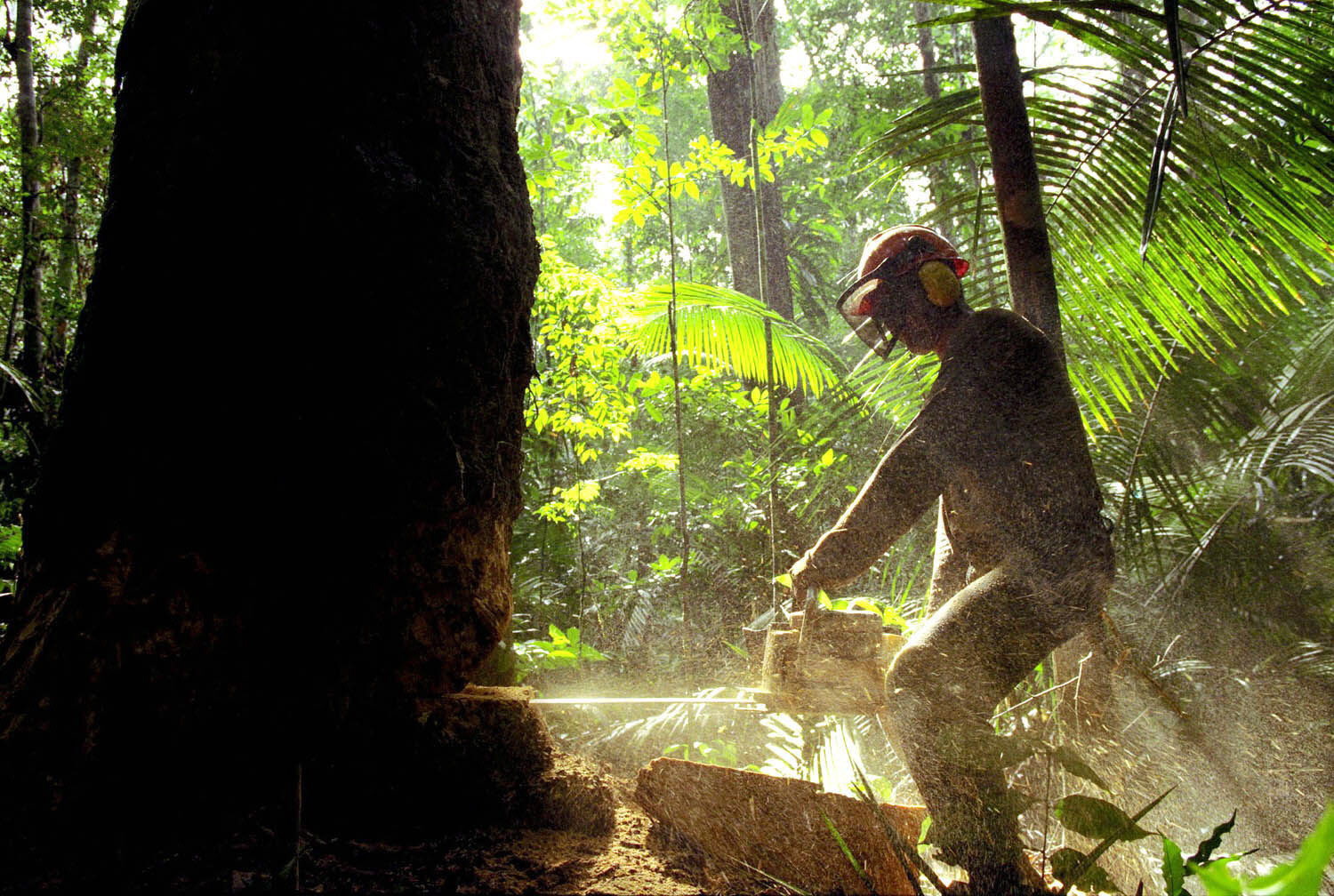 An undated image made available on 14 August 2019 shows a worker cutting down a tree in the Amazon forest in Brazil. Deforestation in the Brazilian Amazon reached 2,254.8 square kilometers in July 2019, an area 278 percent larger compared to the same month last year, according to the National Institute of Space Research (INPE).  EPA/MARCELO SAYAO/Brazil Out

Deforestation is widely recognized as a significant contributor to global warming, accounting for about 10% to 13% of global CO2 emissions. In Brazil, these emissions are strongly associated with deforestation resulting from the conversion of tropical rain forests into agricultural uses. This in turn correlates directly to deforestation in the Amazon.

These forests, on the other hand, constitute the main land carbon sink on Earth and are fundamental in mitigating the effects of climate change and even reducing those effects—they remove approximately 36% of anthropogenic CO2 emissions from the atmosphere. The Amazon Forest alone accounts for about 20% of the planet’s carbon sink, which underlines its importance for the local and regional climate stability.

Since 2004, two distinct trends about deforestation rates have appeared in the Amazonian region. From 2004 to 2012, deforestation was effectively reduced by 84%. But rates have again been trending upward since 2012, with the total area of cleared forest having increased from 4,571 to 10,129 sq km/year in 2019. Multiple factors indicate that deforestation rates will be even higher this year, further underscoring that rising pattern.

Under the target set out in the Brazilian climate legislation, deforestation was not supposed to exceed an area equivalent to 3,925 sq km/year in 2020. Regrettably, there is no reason to believe that Brazil will meet this target, as can be seen in the graph below. 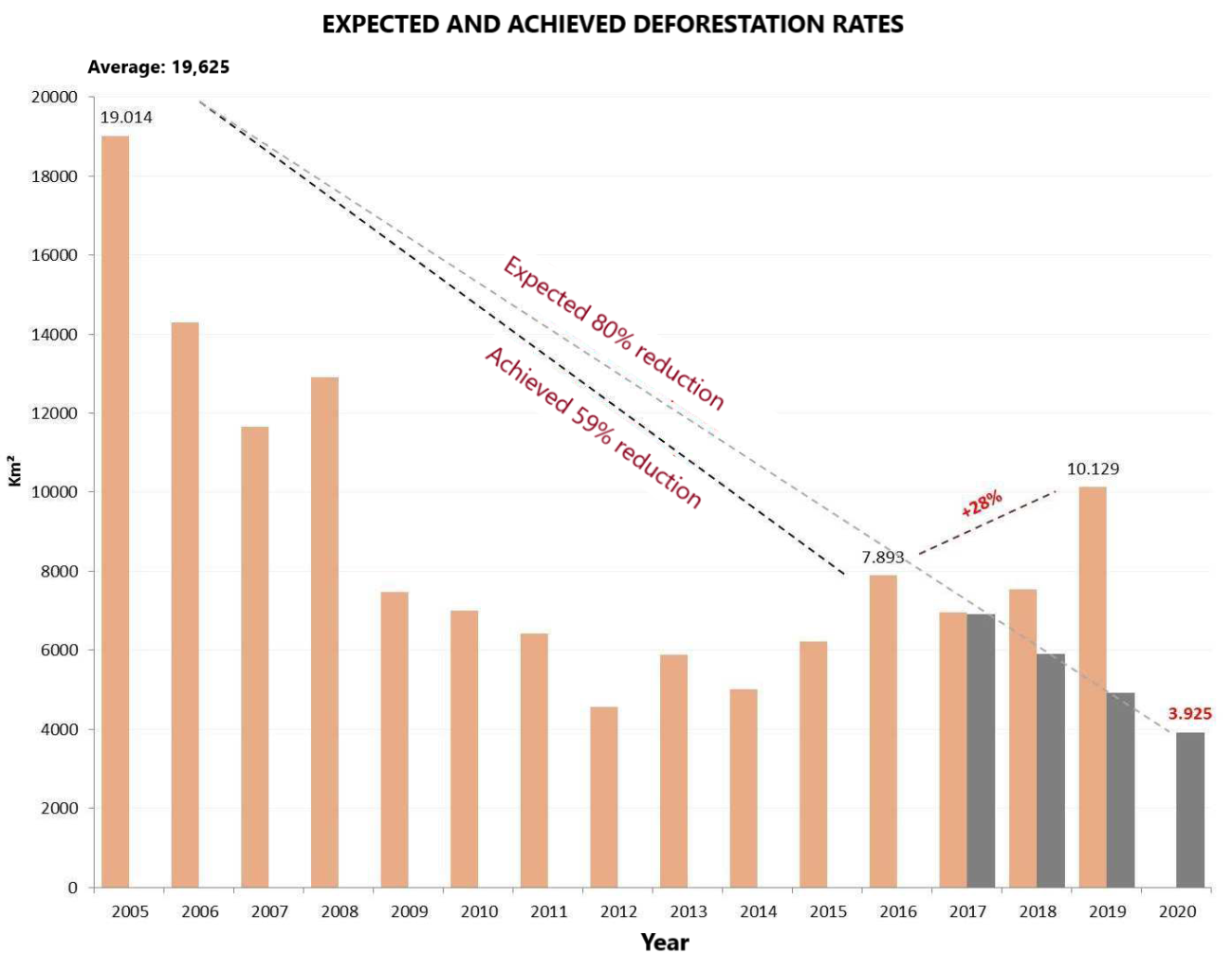 To address this worrisome climate scenario, the IEA (Institute for Amazonian Studies, in Portuguese) filed a public interest climate civil action in October 2020 seeking to impose climate protection obligations on the Brazilian government. Influenced by previous cases of global climate litigation in Colombia, the Netherlands and the United States, the IEA climate lawsuit shares two immediate characteristics with these important precedents: the claim to impose climate-related obligations on a national government and a robust constitutional basis for its arguments.

Nevertheless, given the pioneering nature of the lawsuit and a somewhat limited experience of the Brazilian judiciary with climate litigation, we adopted the strategy of building our case on domestic legislation and arguing along the lines of well-established and traditional fundamental rights. To this end,  our lawsuit sets out to “translate” into legal terms the main scientific concepts related to the role of the Amazon Rainforest in mitigating climate change.

This “decoding” of science into law is carried out by means of the language of rights-based litigation and a selection of human rights already firmly enshrined in the Brazilian Constitution and, therefore, widely recognized by the national courts. Specifically, the issue of Amazonian deforestation and its harmful effects on the climate is addressed by a legal defense based on fundamental rights, such as the right to human dignity, life, health, and an ecologically balanced environment. In addition, the lawsuit seeks the recognition of a fundamental right to climate stability for present and future generations, while at the same time advocating for the fulfillment of obligations and targets objectively provided for in the Brazilian climate legislation.

The Amazon Forest alone accounts for about 20% of the planet’s carbon sink, which underlines its importance for the local and regional climate stability.

Three fundamental strategic choices were made in our lawsuit. First, Brazilian legislation was given preference over international agreements in order to avoid unnecessary debates about their binding nature. Second, we sought to ensure a strong scientific basis by commissioning a technical report that presents and explains official data on deforestation and its influence on the climate at the national and regional levels, and attaching this document to the lawsuit as scientific evidence. This was also designed to serve the vital purpose of providing the courts with objective information they may not otherwise be familiar with. Third, we defend a right to climate stability for present and future generations, as a logical consequence of the synergy between various fundamental rights expressly provided for in the Brazilian Constitution and other legislation.

Even before the signing and ratification of the Paris Agreement, Brazil had already detailed its reduction targets for greenhouse gas emissions in the so-called National Policy on Climate Change. The Brazilian target for reducing greenhouse gas emissions is, in other words, a commitment already foreseen in federal law, complete with quantifiable indicators defined in a decree, and with objective measures outlined in an action plan. It is worth repeating that this legislation predates the Paris Agreement, was drafted by Brazilian legislators, and its binding legal nature is incontrovertible.

To meet these targets, the Brazilian government issued a decree spelling out very specific action plans to prevent and control deforestation in several Brazilian biomes, one of which was the Action Plan for Prevention and Control of Deforestation in the Legal Amazon – the PPCDAm.

The central objective of our climate lawsuit is to have the Brazilian government take appropriate measures in order to comply with the federal law establishing the National Climate Change Policy, and thus enforce compliance with the PPCDAm. What we expect to accomplish includes obtaining recognition of a fundamental right to climate stability for present and future generations and a court order enforcing the federal government to comply with its own climate policies, especially to meet the 3,925 km2/year limit for deforestation in the Amazon for 2020. In case this target is not met by the end of this term (which goes from August 2020 to July 2021), the federal government will be required to reforest the area equivalent exceeding this limit.

We have no illusions, however – for this is the undeniable scientific consensus on the matter – that the deforestation targets will not be met, as the Brazilian government is not currently taking any steps to comply either with the National Climate Change Policy Law or the Climate Mitigation Plans. Still, on a pragmatic level, even if the goal of reducing deforestation is not met within the given deadline, we feel the lawsuit will fulfill an important purpose by seeking an order for the federal government to recompose an area equivalent to the area deforested above that legal limit.

This lawsuit aims to reconcile the ambition of obtaining judicial recognition for an intergenerational right for climate stability with absolutely objective and quantifiable duties of protection, in this specific case, by enforcing the goals of combating deforestation in the Amazon. Regardless of the final outcome, the lawsuit seeks to establish constitutional grounds for this and future climate lawsuits addressing this issue.

In a unique way, the lawsuit not only builds on undisputed constitutional rights, but also argues for a fundamental right to climate stability, which emerges in present times as a legal representation of the necessary effort to face the impacts on various human rights that the climate emergency causes and will continue to bring about.

Délton Winter de Carvalho is a professor of law at UNISINOS, Brazil. He is an environmental law scholar and practitioner whose interests and research focus on climate change law and disaster law.