By neglecting the importance of women workers in the Global South as central to systemic change, we risk sustaining a movement focused on the ideals of Northern activists, that in turn fails to address the fundamental solutions needed to effectively challenge exploitation. 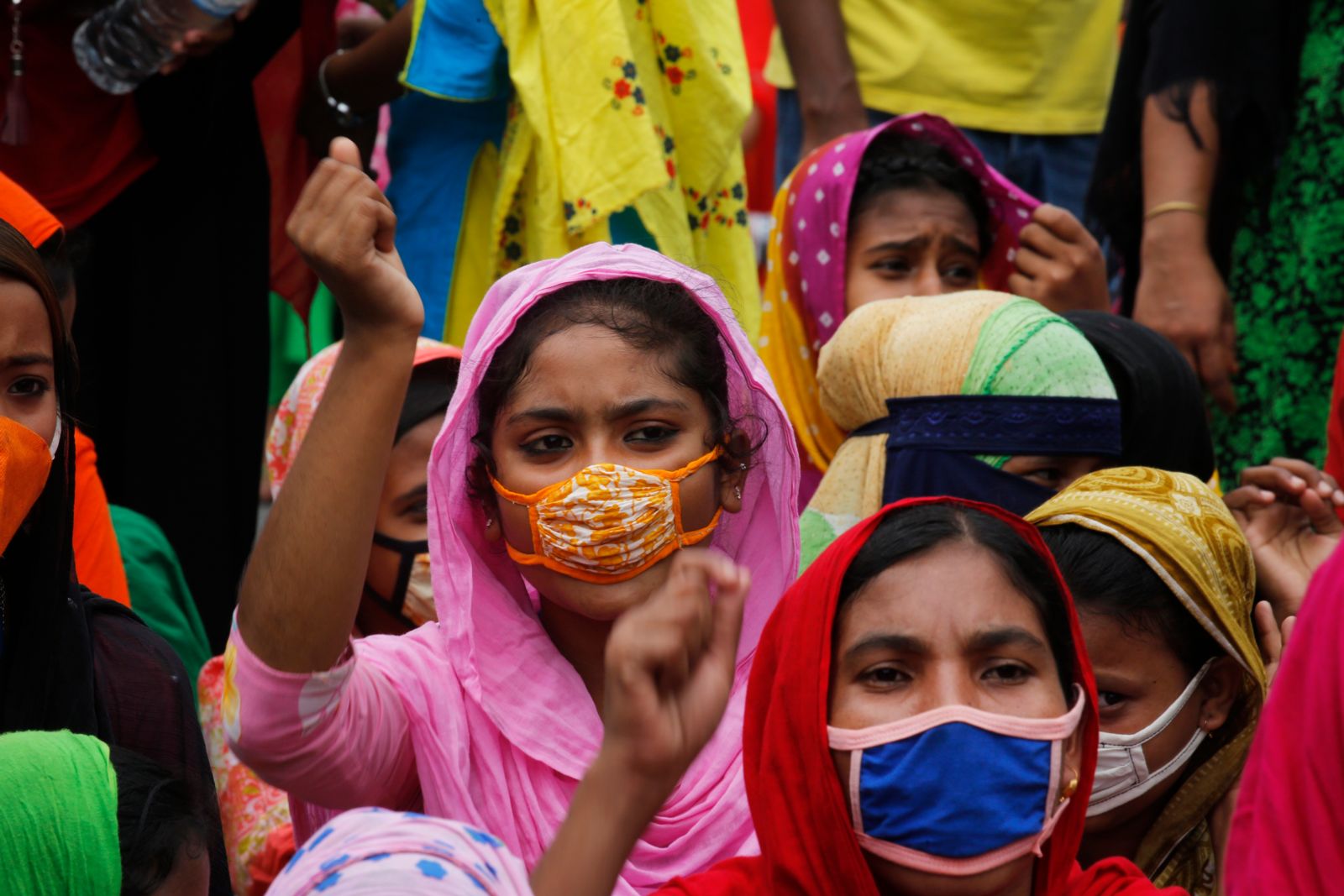 Bangladeshi garment workers, some wearing protective face masks, shout slogans and block a road during a protest to demand payment of wages in Dhaka, Bangladesh, 15 April 2020. According to media reports, thousands of Bangladeshi garment workers are protesting demanding payment of their wages that were not paid by factories after exports worth around three billion US dollars were cancelled due to the ongoing pandemic of the Covid-19 disease caused by the SARS-CoV-2 coronavirus. EFE/EPA/MONIRUL ALAM

As a usual spectator of billionaire brands evading responsibility for their workers, even I was taken back by the news that broke out earlier this year that brands were refusing to pay their workers’ wages – during a pandemic.

When nations around the world went into lockdown to control the spread of COVID-19, fashion brands faced significant declines in profit. To cover their losses, brands cancelled orders with factories they supplied from, refusing to pay for orders that had already been completed, or were in the process of completing. As a result, thousands of suppliers have been compelled to partially or completely shut down, resulting in millions of workers being sent home, often without severance pay. This has left workers unsure as to how they will survive, not only from the pandemic, but from starvation.

A particular focus on Kendall and Kylie Jenner’s brand, reportedly owned by a company that refuses to pay for cancelled orders, has amplified the campaign even further. However, beyond the #KylieIsOverParty hashtags, often omitted from the rhetoric is the mass mobilisation and organising by Black and Brown women garment workers who are leading this movement. By neglecting the importance of women workers in the Global South as central to systemic change, we risk sustaining a movement focused on the ideals of Northern activists, that in turn fails to address the fundamental solutions needed to effectively challenge exploitation.

Following the decision from brands to cancel orders, workers have been denied their wages, forced to work in unsafe conditions, and union workers are facing discrimination from factory owners who are using the pandemic as an excuse to dismiss unionists.

In Bangladesh, thousands of workers have been uniting to stage demonstrations in demand of their wages. Workers in Myanmar have called for brands including ZARA, Primark, and Mango to respond to union-busting at their factories. Following months of struggle and global pressure, we have seen some successes in Myanmar, including an agreement made at the Rui-Ning factory between the union, factory management, and Inditex, the parent company of Zara and one of the largest fashion retailers in the world..

A viral video from India showed over one thousand women workers protesting their unfair dismissal from the Euro Clothing factory, which supplies the Swedish retail company H & M. It is no coincidence, then, that this was the only factory under Gokaldas Exports where workers were unionised.

A notable protest came from Lesotho, where tens of thousands of garment workers waged a one-day strike for unpaid wages, returning to work only after the government vowed to follow through with its agreement to pay around 50,000 workers during lockdown.

Throughout these movements, workers have sustained campaigns on the ground, raising awareness, mobilising people, and connecting with international affiliates. They have laid the foundation of a movement that enables our voices to join the call for justice, demonstrating the importance of keeping workers at the centre of our campaigns to secure justice. However, the neglect of this fact is a routine practice in the Global North, where Northern activists are often presented as the catalyst of change.

The erasure of women workers from the Global South

In a 1996 report for Oxfam, Angela Hale argued that while women in the Global South are highly exposed to exploitation, they have also been at the forefront of local justice. For example, in Honduras, nearly 5000 women garment workers organised a strike after the dismissal of workers who had begun organising in response to poor working conditions. After occupying the factory for several days, the owner agreed to their demand to form a union. In another instance, mostly women workers, employed by the Great River Industries Corporation in Indonesia, organised a strike and marched to the Provincial Parliament, despite the military force they faced, and demanded basic worker rights.

Furthering Hale’s argument, Don Wells published an article in 2009, that highlights cases where garment workers had sustained campaigns to improve working conditions. However, when it came to international reporting of the situation, the Northern activist remained the protagonist in the story. For example, at a Mexican garment factory supplying Nike, workers organised against their poor working conditions and ousted the government-controlled union. While workers had built a movement on the ground and created the connection between Nike and the violations occurring in the factory, it was the Northern activists who received significant praise for encouraging Nike to respond. Wells highlights these incidences as evidence that within transnational networks, Northern activism often ‘complements’ the workers’ struggle, as opposed to being the main reason for their success. In other words, activists in the North tend to dismiss the power Southern actors hold in ensuring their own rights.

We have also seen what Hasan Ashraf and Rebecca Prentice  refer to in their 2019 article as the ‘Rana Plaza effect,’ which they argue is when transnational movements are focused on technocratic improvements to the industry, rather than building labour power and strengthening labour unions.

While workers had built a movement on the ground and created the connection between Nike and the violations occurring in the factory, it was the Northern activists who received significant praise for encouraging Nike to respond.

The tendency of activists in the North to frame situations in ways that suit them is not unexpected. In this 2009 article by Dr. Dina Siddiqui, Siddiqui emphasises how women garment workers are perceived as the ‘emblem’ of exploitation, rather than the ‘subject’ of exploitation, and as helpless victims in need of ‘saving’. This is because the idea of workers needing saving fits the pre-existing rhetoric in the North surrounding garment workers, and is much easier for many Northern activists to digest, instead of addressing complex discussions surrounding the reality of exploitation and their own role in it.

Indeed, Siddiqi highlights how narratives to ‘save’ workers have sometimes led to problematic strategies, such as boycotting. For example, in 1993 there was the proposed Child Labor Deterrence Bill in the USA. The news of this bill resulted in Bangladeshi factory owners dismissing approximately 50,000 children, whose income was crucial in supporting their families, and pushed them into more harmful occupations. Local intervention by human rights groups eventually mitigated the harmful impact the bill would have had, once again indicating the importance of including activists in the Global South in solutions for exploitation.

The #PayUp campaign is a great example of collective action. People all over the world have stood by workers and unionists’ mobilising on the ground, demanding action from brands. The impact it has had demonstrates the importance of supporting worker-led movements and has highlighted the importance of workers’ having the basic right to unionise.

This article, therefore, is not to downplay the work being done by activists to support the #PayUp campaign. This is merely a reminder that while transnational movements are a powerful force against exploitation, they must ensure workers are at the core of strategies for change. If not, we risk continuing a pattern of Northern-led activism that fails to effectively challenge structural injustice and corporate greed.

Mayisha Begum is a campaigner and blogger based in London, UK, where she addresses labor rights and exploitation in the garment industry.