A genuine step for the Biden-Harris administration would be to formally establish a standing coordination mechanism across all relevant parts of the US government to consider the UPR recommendations and develop a meaningful plan for implementation. 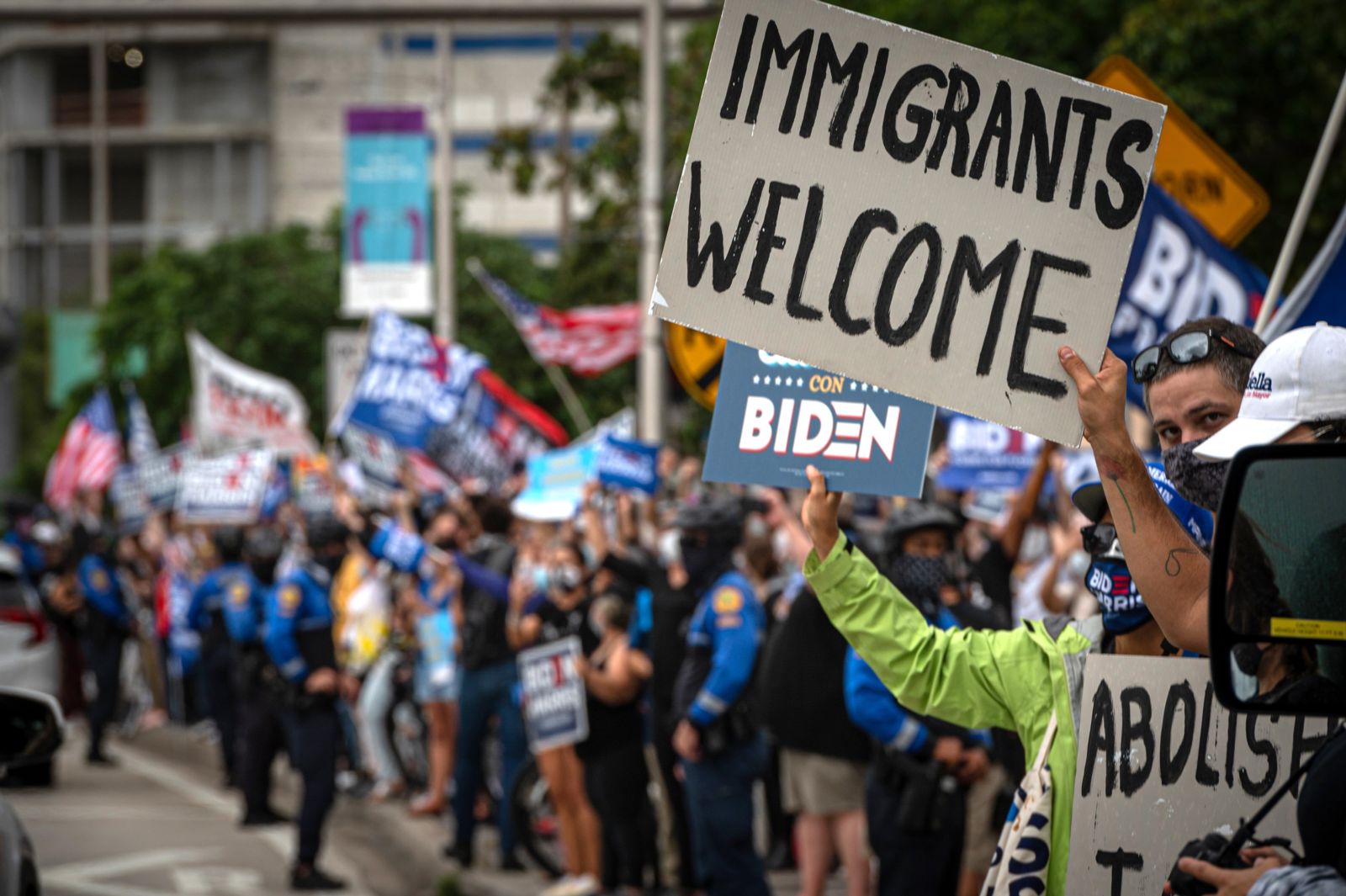 Hundreds of people celebrate the victory of Democrat Joe Biden as the 46th president of the United States today, in a rally in front of the iconic Freedom Tower, in downtown Miami, Florida (USA). EFE / Giorgio Viera

What makes this peer review process unique is its exploration of the whole panoply of issues: from the rights to food, health, education, and jobs to freedoms of speech, protest, and press, and protections from torture and racial discrimination. It results in comprehensive recommendations, agreed to by the state in question. As perilous and destructive as the last four years have been for the US from a human rights perspective, UPR recommendations suggest a roadmap for the new administration, towards repair and a new relationship with the international community and the American public.

Beginning a year ago, hundreds of civil society actors submitted reports to the HRC documenting a range of concerns, from excessive police force to attacks against immigrants and immigrant communities. As the process dictates, the government produced its own self-report, a document that reflected the tone and tact of the Trump administration: reinterpreting human rights obligations as captured in Secretary of State Pompeo's Unalienable Rights Commission and denying the existence of systemic racism. The US Human Rights Network (USHRN) highlights that “the UPR is a unique opportunity to hold the US government accountable. It is one of the few mechanisms that provides the opportunity for individuals, organizations and governments to independently present their perspectives on human rights violations.” Grassroots voices and experiences of the most impacted communities contained in the civil society stakeholder reports illustrate the suffering and vulnerability that trademark the Trump era. Their appeal to international human rights law drives a broader moral and political appeal.

As perilous and destructive as the last four years have been for the US from a human rights perspective, UPR recommendations suggest a roadmap for the new administration, towards repair and a new relationship with the international community and the American public.

The hearing took place as the number of COVID-19 infections were soaring in the US. However, in a glaring omission, the pandemic was not accounted for in the US government report submitted in August. Civil society stakeholder reports were drafted prior to the outbreak of COVID-19 so Member States did not have documentation of the impact of the virus in the country in front of them. The reality on the ground is that the United States is facing the highest mortality rate of any wealthy country. As a consequence of the virus, economic insecurity and joblessness are prevalent and even food insecurity is on the rise. The pandemic is revealing and exacerbating longstanding structural inequities in US society. Black, Brown, and Indigenous communities experience higher mortality rates from COVID by two to three times that of white people and are more likely to be employed in front line and essential work.

Notwithstanding, there were a wide range of issues that the States recommended the United States government to work on. First, despite the historical reluctance of the US to recognize explicitly economic, social and cultural rights, States made recommendations on housing and homelessness; poverty alleviation; equal access to healthcare and workers rights, including those of seasonal workers; equal pay for equal work; and paid maternity leave. Multiple States called for US action on climate change and to rejoin the Paris Agreement. Recommendations to rescind recent restrictions imposed on women’s rights, including family planning and sexual and reproductive health, were offered by a substantial number of Member States.

Second, in the area of civil and political rights where the US considers itself a world leader, the situation also remains alarming. In 2019, the Trump administration resumed the use of the federal death penalty which had been moribund since 2003, a violation noted by a range of States. Well known for its frontal assault on the right to seek asylum and actions that amount to torure, inhumane and degrading treatment of migrants on the southern border, Member States raised specific issues about US immigration and refugee policy, including family separation and detention of minors.

Third, racial injustice and police excessive use of force also received significant attention, following on the heels of a June special session of the Human Rights Council that featured, among others, a video testimony from the brother of George Floyd. Use of force against protestors and journalists during Black Lives Matter protests drew condemnation. Some States recommended measures to reduce gun violence and reasonably control access to firearms.

Fourth, human rights challenges in foreign policy, such as American financial and weaponry support for the Saudi-led conflict in Yemen, were also noted. In particular, numerous Member States called on the US administration to revoke sanctions against officials of the International Criminal Court, including by withdrawing the Executive Order on Blocking Property of Certain Persons Associated with the International Criminal Court.

Finally, the US is infamous for its continuing failure to ratify a host of core human rights treaties. Though the US government maintains that its laws in some instances provide greater protection than these treaties require, its reluctance to embrace them undermines its claim of being a human rights champion. During the UPR, many countries reiterated long standing recommendations that the US take steps to ratify a wider range of these core instruments and to ensure a standing invitation to Special Procedures to visit the US. Moreover, the US continues to lack a National Human Rights Institution (NHRI)—an independent body mandated to monitor, report, and make recommendations to the government to improve legislation and policy in line with human rights standards, which is a focus of Member State and treaty body recommendations. Many States encouraged the US to rejoin the Human Rights Council in the spirit of multilateral engagement and cooperation.

The Biden-Harris Administration has committed to re-engaging the world’s democracies in particular. In view of the last four years, the need to “walk the talk” on human rights at home and internationally could not be greater for the US. The incoming administration will have the opportunity to signal the seriousness of its intentions by sending a high level delegation to accept the hundreds of recommendations at the February-March session of the HRC.

Many States encouraged the US to rejoin the Human Rights Council in the spirit of multilateral engagement and cooperation.

Beyond symbolism, a genuine step for the new administration would be to formally establish a standing coordination mechanism across all relevant parts of the US government to consider the UPR (and treaty body and special procedures) recommendations and develop a meaningful plan for implementation, which includes coherent engagement with state, local, and tribal authorities. Such a mechanism would enable more consistent collaboration with those most impacted by violations, grassroots human rights advocates and civil society organizations, who have been on the frontlines of resistance during the Trump era. This would indicate a distinct departure from the usual practice of addressing, reporting to, and following up on recommendations of human rights bodies in an ad hoc manner.

Many of the recommendations can be implemented through executive action alone, which rescinds the damage done by the Trump Administration and proactively puts in place new policies. Others will require congressional cooperation and bipartisan support in the Senate, where the balance of power is not yet determined. In addition, while many Member States in this UPR cycle welcomed decisions of the Supreme Court which have expanded rights protections, particularly for LGBTQ+, the new composition of the Court could place major judgements in jeopardy. At state and local levels, there is also significant room for further implementation of human rights norms. Perhaps most strategic of the recommendations is the one encouraging the US to establish an NHRI that incorporates the Paris Principles. With such an independent institution firmly in place, the administration could be assured that its efforts to realize human rights would be sustainable and impactful beyond its time in office.