Chile’s constitutional moment is an opportunity to enhance social rights

To do justice to such an ambitious goal, the Chilean process should not leave anyone behind. This is a historic occasion to make the case for social rights. 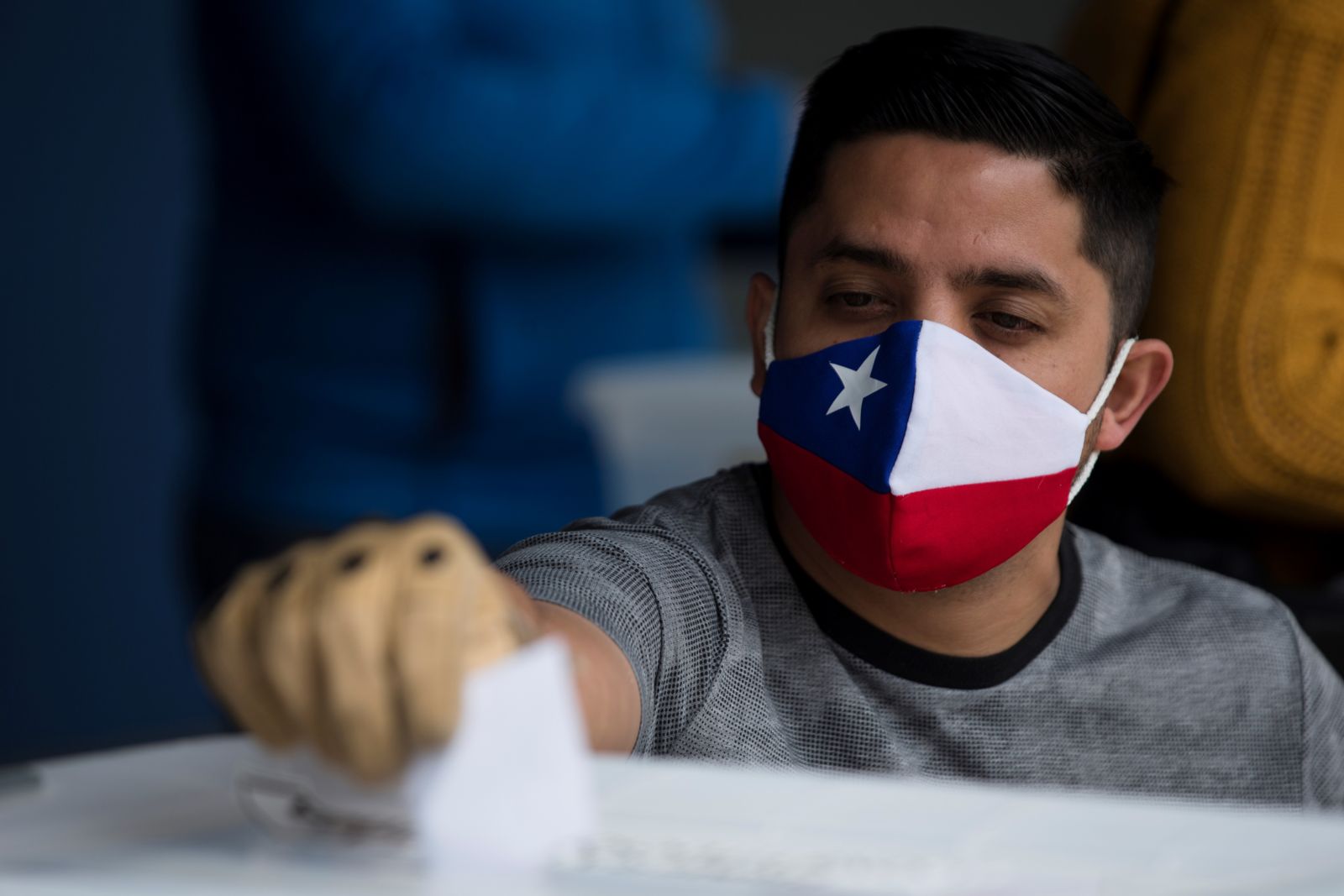 A Chilean man casts his vote at the National Stadium in Santiago (Chile) in October 2020. The more than 2,700 voting centers enabled in Chile for the historic constitutional plebiscite where about 14.8 million Chileans decided at the polls that they wanted to replace the current Magna Carta, inherited from the dictatorship of Augusto Pinochet (1973-1990), and which body should draft the new text, a vote that is considered the more important since the return to democracy. EFE / Alberto Valdés

In October 2019, a series of protests against public transport fare increases in Santiago unveiled serious cracks in Chile’s economic and social model. “It’s not 30 pesos ($0.40), it’s 30 years,” screamed many of the demonstrators, three decades since the end of Pinochet’s dictatorship. While new leaders have been democratically elected in the last three decades, the socio-economic pillars that underpinned the military regime remained intact. Until now.

The popular protests caught the Chilean political and economic establishment off-guard. Only when the government, opposition, and civil society agreed to initiate a process to reform the 1980 constitution did things calm down, and they were able to find a way forward.

A referendum in October 2020, in the midst of the COVID-19 pandemic, confirmed Chileans’ determination to elect a new convention in charge of writing a new constitution for the country. Representatives were elected in May 2021, and the convention began its proceedings in July. It is the first constituent assembly with guaranteed parity between men and women, as well as minimum guaranteed representation for Indigenous people. The president of the constitutional convention is Elisa Loncón, an academic of  Mapuche descent who was born into poverty.

Neoliberalism’s first theatre of operations in the 1970s, Chile now is experiencing a moment of hope and potential transformation. A significant number of the 155 representatives elected to the constitutional convention pledged to support strong social services, greater equality, and labor rights. Chile has the opportunity to take social rights seriously in this exciting new political process.

Pinochet’s regime adopted the 1980 constitution as an attempt to provide a veneer of legitimacy to the dictatorship. Still in force today, and despite multiple reforms, the constitution contains a number of difficult procedural requirements, such as preventive constitutionality control by the constitutional court, or supermajority requirements in both chambers, particularly insurmountable with the anti-proportional electoral system in place until 2018. These authoritarian enclaves made it difficult when not impossible for left-leaning governments to bring about law and policy changes, let alone progressive constitutional amendments.

Chile has the opportunity to take social rights seriously in this exciting new political process.

The 1980 constitution is also the embodiment of the neoliberal model: It prioritizes private property and a market-driven economy, but it does not guarantee education, healthcare and social security for those in need. The constitution only recognizes the freedom to choose between different providers, for example, in relation to health and social security, but it does not ensure a minimum content for these rights; the right to education and the right to a healthy environment are not justiciable, and the right to adequate housing is nowhere to be found.

In 2016, the UN Special Rapporteur on Extreme Poverty and Human Rights concluded that “the formulations used (in the 1980 constitution) do not generally conform to international standards and are not firmly anchored in the language of rights and obligations. The methods of implementation envisaged are relatively open-ended and non-empowering and do not explicitly include judicial action” in relation to social rights.

Under the 1980 constitution, social rights are not a matter of public service; they are instead tradable goods only available to those who can afford them. And affordability is  unevenly distributed as a result of high levels of inequality. Despite economic growth in recent decades, Chile has one of the highest rates of income inequality in the OECD, both in terms of income and wealth distribution, as well as one of the lowest rates of public spending.

Back in 2015, the UN Committee on Economic, Social and Cultural Rights recommended that Chile should “guarantee the comprehensive recognition and necessary legal protection of economic, social and cultural rights” in a new constitution, “while ensuring that the constitutional reform process is conducted in a transparent and participatory manner.”

Besides international human rights obligations, there is a democratic case for social rights in Chile’s constitutional moment. The fairness of a constitution depends on the extent to which human rights, including social rights, are enshrined in it, with proper accountability for public authorities. At the same time, the democratic legitimacy of a constitution depends on the extent to which the opinions of those most affected by it are taken into account. In a democracy, only when participation is open, transparent, and meaningful, do citizens have reasons to see a constitutional settlement as their own, even when they may not necessarily agree with everything it says.

To do justice to such an ambitious goal, the Chilean process should not leave anyone behind. This is a historic occasion to make the case for social rights. A key responsibility is to listen carefully to those most affected by public policies, by authorities’ decisions, and by their omissions.

The fairness of a constitution depends on the extent to which human rights, including social rights, are enshrined in it, with proper accountability for public authorities.

That is precisely the immense challenge and opportunity Chile is facing at the moment. The Human Rights Centre of the University of Essex (UK), the University of Concepción (Chile) and the Global Initiative for Economic, Social and Cultural Rights (GI-ESCR) have joined forces in this historic moment of hope and civic responsibility to provide evidence and analysis for the constitutional convention.

The three partners have brought together fifty academics and practitioners, half of them Chilean and the other half from a wide range of countries, including Argentina, Brazil, Canada, Colombia, England, Ireland, Mexico, Scotland, South Africa and the United States. Together, they are the authors of a new book, freely accessible online in Spanish, that looks at different models of recognition of social rights. In more than thirty chapters, contributions include legal and multidisciplinary studies about the theoretical foundations of human rights, the role of the judiciary and other accountability bodies, the content of rights (social security, work, health, housing, education, water and sanitation, and the right to a healthy environment), the necessary protection for groups at greater risk of harm, disadvantage and discrimination (indigenous people, persons with disabilities, women, children, and older people), and lessons learned from other constitutional processes around the world (particularly, Brazil, Colombia and South Africa). Besides the international and comparative perspectives, the book also examines what the constitutionalization of social rights may mean in Chile’s legal order.

The majority of Chilean people are pushing for a new constitutional framework that could realize all human rights, including social rights, for everyone. The challenge goes beyond the mere architecture of public institutions and the technical legal formulation of rights. This is an opportunity to revisit the foundations on which Chilean society is built, the type of country and the sort of future Chileans deserve.