The current openGlobalRights debate on internationalizing human rights NGOs misses a crucial point: “international” NGOs are also the sum of a group of individual organizations established under distinct national laws, more or less connected to one another through trademark agreements.

Within this transnational NGO coalition, the right to speak on the group’s behalf is unevenly distributed; some units and individuals can, while others cannot. This inequality suggests that we must pay attention to the diversity behind the singular organizational entity, which is in fact an international NGO network, all the members of which use the same name and operating rules.

Who, for example, is allowed to speak on behalf of Amnesty International or Human Rights Watch (HRW)? Can all national branches (or committees, in HRW) speak out equally? Regulating the right to represent the NGO is also a trademark and licensing issue in which the different national units struggle to define and dominate organizational identity.

One characteristic of globalization is national comparative advantage in the mobilization of specific resources. Some national units are better than others in fundraising, within their own context. But this leads to multiple actors claiming the international NGO’s “label”, and increases the number of potential disputes among network members.

Consider, for example, the tensions within Amnesty International on the issue of LGBT rights; in Senegal, members of the local Amnesty entity were uncomfortable making the issue a priority, given that homosexuality was punishable by law in their country. Are we not dealing with Amnesty, whether we speak of Amnesty International France or Senegal? Believing this would imply that we consider the internationalization process successful, which it may never be, or that we are limiting the definition of the organization to its charter.

The largest human rights NGOs are international by definition, based on their visibility or the causes they stand for. As a result, we often forget that they are—at their origin—entities registered under specific national laws. To expand internationally, they have to be managed through new entities throughout the world. This internationalization process is presented by many NGOs as a necessary evolution, allowing them to act as global actors on global subjects, based on a universality that they regard as inherent to their issues. This is compounded by the attempted “de-Westernization,” at least partially, of the organizations' identity. The International Federation for Human Rights (FIDH), the global francophone NGO, Amnesty International, and Human Rights Watch are all engaged in such efforts.

The moral case for NGO internationalization is clear, but there are other reasons as well: a quest for new resources, both financial and human, new areas from which to raise new funds, and inter-organizational competition. Expansion, after all, means access to, and relationships with, new donors. This primarily involves privately raised money, whether from individual donors, who may be sensitive to themes less valued in neighbouring countries, or from businesses and large foundations, which are more easily accessed through urban, international centres. But the same logic can be applied to publicly raised funds for human rights NGOs, which are raised—for example—by the European Commission or through cooperation with one of the countries of Northern Europe.

Competition of this sort pushes organizations to change their structure and create global identities, in order to achieve critical global mass. Economic reasons are not the primary motivator, but the power of political economy cannot be ignored. If everyone must play at both the local and international levels, the smaller NGOs simply cannot compete. 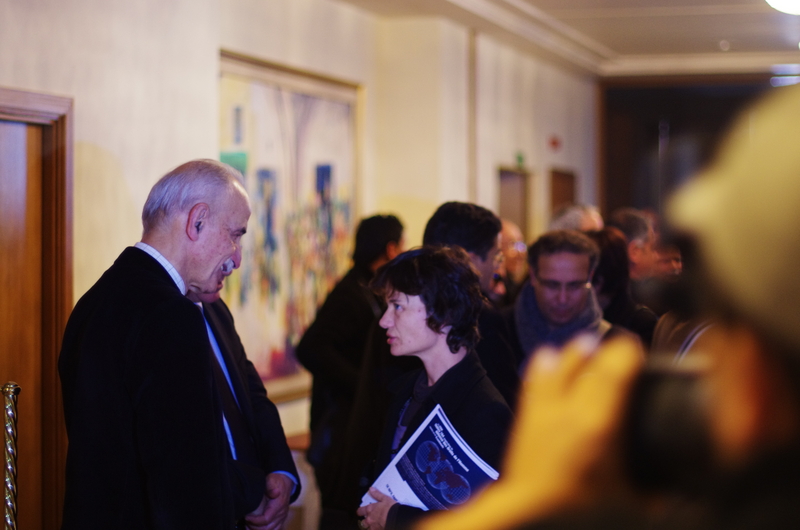 The president of FIDH receives guests at the opening of the organization's Tunisian office. The globalization of NGOs is being initiated by certain powerful groups but affects everyone as it transforms the scope of local action. How will this affect the efficacy of the human rights movement at large?

The internationalization of these NGOs is the result of a non–linear process—with which not all members agree—and which necessitates bringing decision-making processes to a higher level. In addition, the development of advocacy activities, which are less about public opinion than about specific government practices, further reinforces the need for the creation of new national branches. Competing NGOs seek to globalize their influence and funding. Gradually, as the playing field extends, the number of entities capable of acting on such a large scale decreases. Not everyone can be an Amnesty powerhouse—there simply isn’t room. This globalization process, initiated by certain powerful NGOs, affects everyone as it transforms the competition by changing the scope and the ability to act, which are available to only a select few. Finally, the increased degree of expertise mobilized by human rights organizations, which rely on an increasingly more significant body of law, results in the professionalization of advocacy. This encourages a search for increasingly well-trained teams and human resources, more precise legal and linguistic specializations, and encourages once again the internationalization of the human resource search.

Thus, the internationalization of advocacy refers not only to the dissemination of NGOs' values, but to a process of transformation in terms of competition and quality standards.

In short, the logic of NGO internationalization does not imply only the creation of a "global civil society", but also represents the coagulation of different fragments of national civil societies. These NGOs are driven by the logic of accumulation of resources, which are transforming their area of operations through the contradictory themes of standardization and fragmentation.

Johanna Siméant is a professor of political science at the University of Paris I Panthéon-Sorbonne, and author of, “What is Going Global? The Internationalization of French NGOs ‘Without Borders’”.