When political prisoners are locked up by states as “terrorists”, how can human rights activists overcome such systematic attempts to deny political motives? 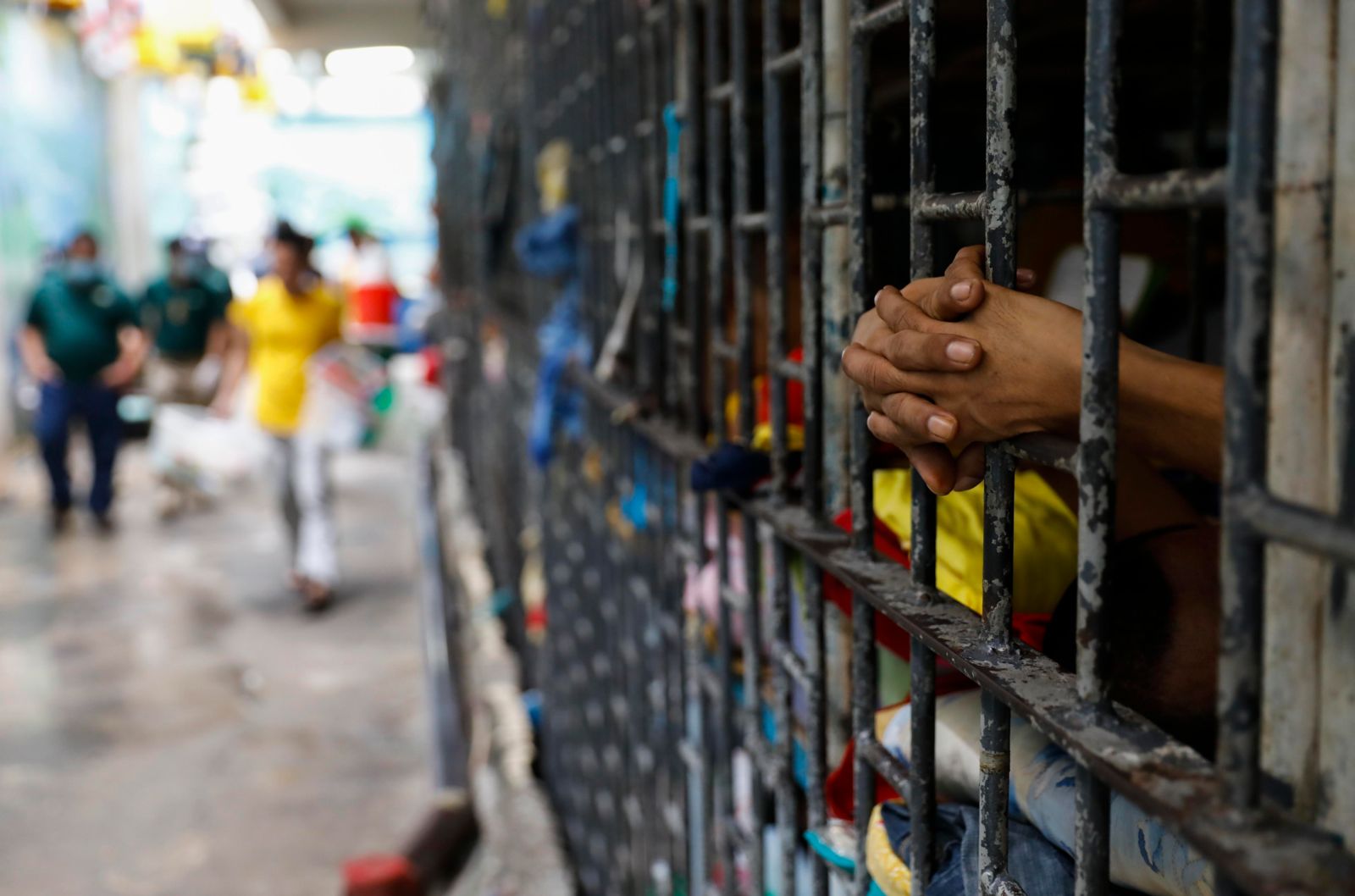 An inmate grabs the bars of his cell as the combined staff of the Philippine Drug Control Agency (PDEA) and the Office of Bankruptcy and Penology Administration (BJMP) conduct an inspection at the Marikina city jail, east of Manila, Philippines in October 2017. EFE / ROLEX DELA PENA

Autocratic regimes around the globe imprison individuals for politically motivated reasons. At the same time, hardly any government in the world acknowledges the presence of political prisoners in its cells. Since political imprisonments represent a major human rights violation under international human rights law, governments have incentives to deny their political character. In order to obscure political motivations, autocratic states seek to provide them with a semblance of legality. This article discusses five major (extra)legal strategies that are commonly used to justify politically motivated imprisonments.

First, various dissidents around the world are imprisoned on the basis of broadly interpreted “sedition” laws. Such laws against subversive actions are codified in the criminal codes of several states and tend to be abused to outlaw any type of opposition against the government in power. For instance, Thailand frequently imprisons its dissidents on the basis of its ‘lèse-majesté’ law (article 112 Criminal Code) that qualifies any form of critique against the king as a crime. Likewise, the law that prohibits “contempt of the head of state” (article 158 Criminal Code) in the African state Gabon is oftentimes used to prosecute opposition members. Vietnam tends to charge its dissidents with “propaganda against the Socialist Republic” (article 88 Criminal Code). These laws have in common that they provide a legal basis for politically motivated imprisonments allowing judiciaries to sentence dissidents in due processes. However, the laws themselves represent violations of fundamental human rights such as the freedom of expression.

Second, governments tend to resort to “anti-terrorism laws” to justify politically motivated imprisonments. By declaring dissidents as terrorists, governments seek to de-legitimize the demands of the opposition by associating it with violence and chaos. The inflationary usage of the terrorist label can be traced in various states including in Syria under Assad, in Russia under Putin, but also in the US during the “war on terror” after 9/11.

The criminal codes of several states include explicit anti-terrorism laws that are exploited to punish opposition members. For instance, the Erdogan-regime in Turkey excessively uses its anti-terrorism law to imprison putative members of the Gülen-movement or of the Kurdish separatist movement (anti-terror law no. 3713, Article 7/2). The Russian criminal code outlaws the “participation in the activities of extremists organizations” (Article 282.2-2). The Duterte-regime in the Philippines has recently adopted an anti-terror law with an overbroad definition of terrorism. The deputy Asia director of Human Rights Watch stated that “the Anti-Terrorism Act is a human rights disaster in the making.” The human rights community must be aware of such distortions of the terrorism-label since various detained “terrorists” neither promote terror nor violence.

By declaring dissidents as terrorists, governments seek to de-legitimize the demands of the opposition by associating it with violence and chaos.

Third, autocratic governments make use of so-called “emergency laws” to justify the incarceration of political opponents. Emergency laws tend to expand the authorities of executives and override judicial safeguards. However, the term “emergency” is frequently a misnomer. Instead of representing an instrument for exceptional times, various governments never revoke the state of emergency. For instance, the former Egyptian dictator Mubarak has enacted mass imprisonments on the basis of an emergency law that had been in force for more than thirty years. More recently, there have been concerns about emergency laws related to the COVID-19 pandemic in states such as the Philippines, Jordan, or Hungary that might be exploited for political imprisonments. Autocratic governments tend to use security concerns as a pretext to incarcerate political opponents that are depicted as public threats. The human rights community must insist that fundamental human rights are protected even in times of crises.

Fourth, some dissidents are put in prison on fabricated charges related to crimes they have never committed. In the case of these so-called “frame-ups”, governments apply legitimate laws such as criminal clauses against theft or murder. However, there is no evidence that the defendants actually committed these crimes. For instance, the Russian regime has imprisoned several dissidents on fabricated murder charges, the Azerbaijani regime has wrongly accused dissidents of drug crimes, and the autocratic government in Belarus has falsely accused dissidents of armed conspiracy. Such cases of framed-up crimes allow autocratic regimes to evade international pressure related to politically biased laws. Since political prisoners are deliberately conflated with criminal prisoners, human rights defendants have a hard time identifying the political inmates. Hence, it is essential that the human rights community carefully scrutinizes criminal cases in states that have a history of framing-up crimes.

Fifth, various governments deprive dissidents of their liberty in absence of any legal basis. Instead, they are held in pre-trail detention waiting for prolonged or even unlimited periods for their judicial procedures. Recent cases of such politically motivated detentions have occurred in Egypt under the autocratic rule of as-Sisi, in Bahrain under the reign of Al Khalifa, or in Venezuela during Maduro’s presidency. Pre-trial detentions enable autocratic governments to scapegoat inefficient judiciaries for lengthy deprivations of liberty. While judicial procedures are deliberately delayed, accusations of political motives are dismissed with reference to pending trials.

Detentions without criminal charges are practiced on a large-scale in China’s detention camps where hundreds of thousands of citizens from ethnic minorities are held with no charges levied against them. The Chinese government seeks to distract from political motives by euphemistically calling the detention facilities “re-education camps”. Human rights lawyers concur that such lengthy detentions without prompt access to a court represent a grave violation of procedural justice in violation of the right to a fair trial.

These five different strategies illustrate that autocratic governments try to legalize repression, to stretch criminal laws, to misinterpret evidence, and to prolong judicial procedures to obscure politically motivated imprisonments. How can we identify political prisoners despite such systematic attempts to deny political motives?

First and foremost, the human rights community must be aware of these strategies to debunk illegitimate deprivations of liberty. It is important to recognize that convictions in due processes are no sufficient conditions for legitimate imprisonments, given that the applied laws might be biased themselves. In order to facilitate the identification of political prisoners, the human rights community should develop a global catalogue of the “laws of shame” that are frequently exploited for political imprisonments. Every charge on the basis of such a law must be carefully investigated by independent actors. The United Nations Working Group on Arbitrary Detention plays a decisive role in revealing such illegitimate deprivations of liberty. However, its limited resources suffice only to investigate a tiny subset of cases of arbitrary detentions. It currently operates with five experts, which is by no means sufficient to identify all victims of arbitrary detentions. It is essential that rights-respecting states strengthen this actor to conduct impartial investigations on a broader scale. Furthermore, the human rights community should promote the individual complaint mechanism of the Working Group. Each individual has the right for an independent investigation of her prison sentence; however, individuals must be aware of this right in order to make use of it.

Governments around the world manipulate the language of law to justify politically motivated imprisonments. As a human rights community, we must counter these attempts with independent information and impartial evidence to de-legitimize arbitrary deprivations of liberty.

Christoph Steinert is a PhD student at the University of Mannheim. He conducts research on human rights-related topics with a particular focus on political imprisonments.