Israel’s human rights organisations depend on foreign funding to defend the rights of the Palestinians. But as the Middle East is increasingly torn by new conflicts, foreign funding may shift to wider regional and global rights issues.

Israel is a special case in human rights work and human rights funding. For a start, it is a western society in a non-western region, and “border” societies are always unique. Israel is a member of the OECD, its political heritage and economic indexes are closer to that of EU countries than to any other part of the world. The rest of the Middle East, including Palestinian non-citizens, is part of The South in terms of economic indexes and has its own political traditions and institutions which are closer to other post-colonial counties.

Secondly, Israel is involved in a long-term occupation of a non-western society – the Palestinians in the West Bank, East Jerusalem and Gaza. Third, the two societies – Jewish-Israeli and Palestinian – are in a state of on-going conflict that in the last decades escalated every few years to become armed hostilities, claiming the lives of thousands on both sides. Often, human rights work is perceived – especially in the eyes of the Israeli public – as “taking sides” with the enemy in the conflict, and more than anything else, it is seen as a primarily political activity. In recent years, human rights organizations have taken a leading role in documenting and challenging the human rights violations that take place under the occupation; at the same time, criticism of their work and attempts to limit their funding sources have also grown significantly.

For the sake of the debate, this article will focus on Israeli human rights organizations who deal with the Occupied Palestinian Territories (West Bank, East Jerusalem and Gaza, or the OPT).

The origins of Israel’s rights movement

Following the first Intifada which broke out in 1987, the Association for Civil Rights in Israel (ACRI) began focusing on the occupied territories. Around the same time, several political activists formed B’tzelem - a human rights organization dedicated to violations taking place in the West Bank and Gaza (then still under direct Israeli control). Both organizations were quickly portrayed in the national conversation as being “pro-Palestinian,” and therefore at odds with the policies of the Israeli government. It was a position shared by politicians and commentators from the right and left alike – even those who took pride in the Israeli democracy and the special place the human rights community holds within it. Prime Minister Yitzhak Rabin famously called ACRI “the association for Hamas’ rights.”

The collapse of the peace process, the second intifada (October 2000) and the decade that followed saw the emergence of a whole array of non-profit organizations that use advocacy, petition to courts, public campaigns and similar tactics to highlight and oppose the effects of the occupation on Palestinian civil society. Today, those organizations deal, among other things, with legal rights of Palestinians (Yesh Din), accountability of the Israeli Defence Force (IDF) (Breaking the Silence, B’tzelem), house demolitions (Rabbis for Human Rights, The Committee against House Demolitions); torture (The Public Committee against Torture), freedom of movement (Gisha, Machsom Watch); monitoring settlement construction (Peace Now – a grassroots movement turned NGO), promoting dialogue, and many other issues. Israeli human rights organizations have become a leading source of information  for local and international politicians, journalists and other professionals who deal with the conflict. These organizations are also perceived as being part of the political opposition because of their position on the single biggest issue to dominate Israeli politics in the past few decades.

Where the funding comes from

Most funding for human rights activities in the Occupied Palestinian Territories and even inside Israel comes from the foreign sources. The Israeli government does not support human rights work on the Palestinian issue, and donations from the business sector and private citizens are extremely limited. It should be noted that donations to non-governmental organizations of all sorts in Israel are relatively low. More than half of the 27 billion USD that went to Israeli non-profit organisations in 2010 came from the government, and only 1 to 3 percent from private donations. The non-profit sector is a relatively new phenomenon in Israel which may, in part, explain the absence of a philanthropic tradition.

When Israelis do give to human rights causes, they would rather do it for environmental issues, social justice, gay rights and other causes which are not directly related to the conflict.  Heads of human rights NGOs I have spoken to confessed to a great difficulty in fundraising “on the Palestinian issue” among Israelis, who perceive the work of the organizations as serving the interest of “the other side” in the conflict. With international donors, I was told, it’s the exact opposite: They are likely to give more to organizations which deal with peace-building or defend the rights of Palestinians under the occupation. The result is a public perception that human rights work on Palesitnian issues amounts to “foreign intervention”. In other words, the need to rely on (mostly) foreign funding results in a challenge to the organizations’ image and to their ability to operate freely. At the same time, as long as Israel is in conflict with the Palestinians, the prospect of major local support for human rights organizations remains relatively low.

Many of the human rights organizations are supported by grants from foreign governments, including the European Union, USAID and various governments-run funds and programs. Scandinavian governments are especially active on the Palestinian issue; and there are five German political funds operating in Israel, supporting various political issues. The other main source of funding for the human rights community is private donors, most of whom are members of the Jewish diaspora.

Throughout Israeli history, diaspora Jews have supported every kind of project and institution – from the military to sports to civil society. However, the human rights community is more dependent on Jewish support than other elements of Israeli society, due to the lack of government support or any other form of local funding. 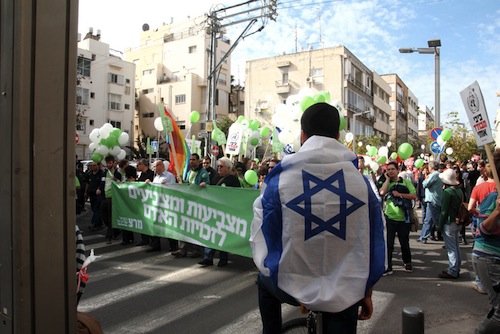 A man in an Israeli flag looking at participants of the Human Rights March in Tel Aviv. Oren Gutman/Demotix. All rights reserved.

Recent years have seen an organized effort by the Israeli right to attack or limit funding sources for human rights organizations. They have done this in two ways: firstly, they have attempted to introduce legal limits on foreign support for Israeli organizations; and secondly, they have launched campaigns to scare private donors, especially (but not exclusively) those from the Jewish diaspora.

On January 2010, a non-profit organization with strong ties on the political right called Im Tirzu launched a high-profile campaign against the New Israel Fund (NIF) – a liberal-Zionist organization that has been supporting human rights issues in Israel for almost thirty years. According to Im Tirzu, organizations sponsored by NIF were behind The 2009 Goldstone Report, which accused the IDF of committing serious human rights violations and even war crimes during the 2008 Israeli invasion to Gaza. These allegations had a severe impact on the image of the NIF in Israel.

In recent years, several other rightwing non-profit organisations – financed as well from abroad, mostly by Jewish and Christian-Zionist donors - began publishing reports on “anti-Israeli” activities by members of human rights organizations. These included: speaking against Israeli policies in a foreign country, opposing Zionism, supporting the boycott of institutions that supported the occupation and of Israel as a whole and other forms of political activities. The real target of many of these reports was not the organizations, but rather at their institutional funders.

In 2010, Knesset members from the right introduced bills aimed at limiting foreign government funding to human rights organizations, either through imposing high taxes on them or by completely banning certain kinds of support. Fearing an international backlash, Prime Minister Binjamin Netanyahu used his power to prevent the legislation being passed. However, in recent months, similar bills have been introduced again by right wing members of the Knesset.

Attention and funds are moving towards global and regional rights questions

It is very difficult to estimate the effect of this kind of attack on the work of the human rights community.

Several organizations, including NIF, have actually seen a certain growth in private financial support, especially following the worst attacks (certain images by Im Tirzu echoed rightwing anti-Semitic propaganda, leading small donors to show their support of NIF by giving more). At the same time, donors and funders have introduced more strict guidelines for human rights activities and they monitor advocacy and political work more closely. Among both organizations and funders there seems to be a growing fear of making “the wrong” move or statement and exposing themselves to further attacks.

While not admitting it publically, it also appears that certain donors are more reluctant now to get involved in the Israeli/Palestinian issue. This could be the result of a feeling of perpetual status-quo and lack of return on investment in the form of actual change, but the hostility they have observed also plays a part, especially with funds based in the United States. At least one major U.S.-based fund supporting human rights causes has terminated its Israel program recently. Another fund, which started a pilot program with some human rights organizations, decided to pull out at the last minute; rumours claim that political pressure and political fears played a part in its decision.

There are also other developments which present a challenge to the human rights community in Israel. Some describe this shift as a potential crisis for Israeli human rights groups, others say it is just ‘a phase’.  A new generation of Jewish funders is turning its attention to global human rights questions rather than those associated with the Jewish community or Israel. Governments and funds which take special interest in the Middle East are focusing on the Arab Spring and on democracy building in other parts of the region, some of them feeling that it is too expensive or difficult to make any impact on the Palestinian issue. One of the most important funds operating in the region has decided to avoid new commitments in Israel for the time being.

The prospects for the future

Despite a new round of peace talks, the Israeli-Palestinian conflict seems as far as ever from resolution, and many trends on the ground – from settlement growth to the decline in support for peace and co-existence on both sides – are alarming. In recent years, observers find a renewed interest in the human rights aspects of the conflict and not just the diplomatic process. Through its innovative technique, commitment and high professional standards, the Israeli human rights community has taken a leading role in this conversation. However, this very same community is at a crossroad, facing internal pressure and on-going attacks and in danger of losing some of its international support just at the time it needs it the most. It is a moment that begs for new thinking and even for a renewed effort to turn to the local Jewish-Israeli community, both for political and for financial support.

Noam Sheizaf is a Tel Aviv-based journalist and the founder and manager of the web magazine +972(972mag.com). Previously he worked for leading Israeli media outlets, including Ha-ir, Ynet News and Maariv. He covers the Israeli political system and the Israeli-Palestinian conflict; his work has been published in Foreign Affairs, Foreign Policy, The Nation, Haaretz and other publications. He grew up in Israel, served four-and-a-half years in the Israeli Defence Forces, and later studied political science at Tel Aviv University.