In today’s Turkey, lawyers themselves are being targeted—just for practicing their profession in accordance with the law. 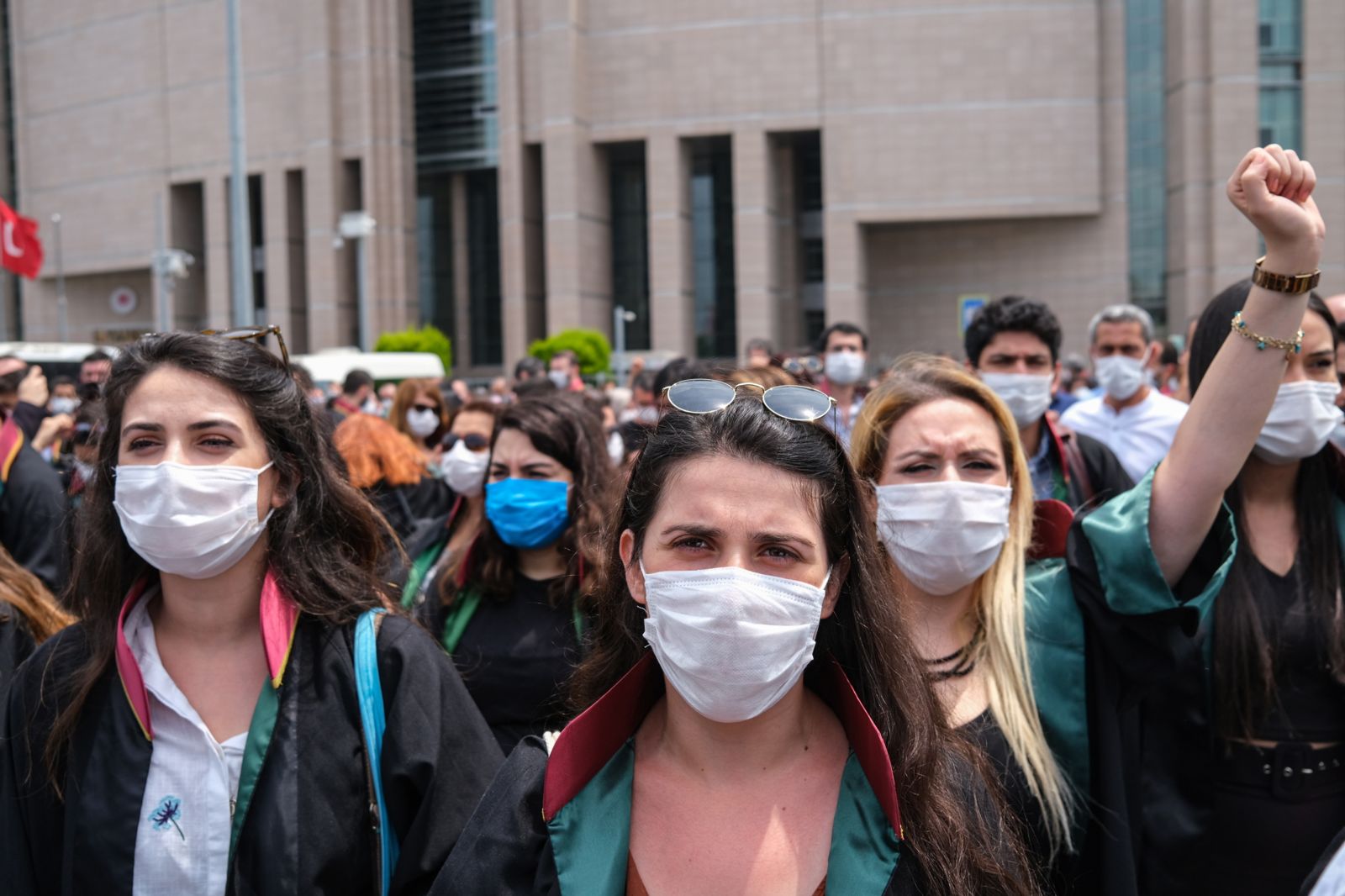 Members of Istanbul Bar Association attend a rally against a draft bill governing the organisation of bar associations, in front of the Caglayan Court House in Istanbul, Turkey in June 2020. Turkish government has proposed changes to the associations' election system that it says will make it more democratic and increase representation from smaller cities. EFE/EPA/SEDAT SUNA

Not long ago, international human rights scholars and experts considered Turkey a promising story of democratic transformation. But both human rights and those who defend them in Turkey are increasingly at risk today. Particularly since the 2016 coup attempt, Turkey has intensified restrictions with a controlled judiciary, systematically targeting those who stand up for democracy. Thousands of journalists, academics, lawyers, and government critics have lost their jobs, have been targeted by smear campaigns, or have been accused in court of terrorism-related crimes or insulting President Erdoğan.

The most vocal parts of civil society are being systematically suppressed in the country. This increases reliance on lawyers who can defend the rights of those who stand up for democracy. However, in today’s Turkey, lawyers themselves are being targeted—simply for practicing their profession in accordance with the law.

Even though the two-year state of emergency following the coup attempt ended in 2018, the country now finds itself in a so-called “normalized state of emergency rule.” This means that certain emergency decrees that should not have effect past the emergency period are still being used, or that after the emergency period ended, new laws were adopted, including the same provisions as those present in emergency decrees, thereby legitimizing the existence of restrictions imposed by the laws. In other words, emergency-like laws, which are not subject to the same checks and balances that a democracy has, are still used to restrict fundamental rights and freedoms in Turkey.

Since 2016, attacks on lawyers have become institutionalized and systematic. Lawyers are investigated, detained, and  no longer feel safe and free when defending their clients in court rooms or police stations. This means that lawyers are no longer able to practice their profession the way they are supposed to in a healthy democracy.

This sentiment was echoed by a series of lawyers from Turkey who participated in an event co-hosted by the Truth Justice and Memory Center (Turkey), the Association for Monitoring Equal Rights (Turkey), the Netherlands Helsinki Committee (Netherlands), in collaboration with Lawyers for Lawyers (Netherlands). The event, which coincided with the launch of a report titled A Defenseless Defense in May, 2021, addressed the increasing pressure Turkish lawyers and bar associations experience in their daily human rights activities and the solidarity movements that arose in Turkey as a result.

One of the lawyers, Özlem Zingil, explained that lawyers are subject to pressure because of “their identity as rights defenders” and are all too often targeted because of who they represent. For example, if the client of a lawyer is standing trial for alleged membership of a terrorist organization, the lawyer will also be accused of being a member, and the evidence used against the lawyer will include the professional relationship with the client.

Sezin Uçar, a member of the Law Bureau of the Oppressed Ezilenlerin Hukuk Bürosu, explained that in her ongoing trial, evidence used against her includes attending press conferences about her clients. As a result, she now stands accused of “making propaganda for a terrorist organization” and “membership of a terrorist organization.” She explained that when the rights of lawyers are restricted, their clients’ right to a fair trial is also automatically restricted. Lawyer Benan Molu echoed this and added, “[these are] politically motivated attempts to silence and punish both lawyers and the clients they represent.”

The government does not only attack currently practicing lawyers. There is also pressure on the future generations of lawyers: law students. Students who join a press conference that condemn human rights violations risk not obtaining their license to practice law. According to Uçar, the following message is loud and clear, “During your time as a student, do not join any press conferences [and] do not exercise any of your democratic rights. Behave the way the current authoritarian regime wants lawyers to act. Remain silent, do not join any protests, [and] do not freely express your opinion.”

But lawyer Kemal Aytaç clarifies that lawyers are not hopeless and they continue to resist and fight for fundamental rights and freedoms in Turkey. One example of such resistance is the creation of Justice Watch (Adalet Nöbeti). Aytaç was involved in organizing it after a police operation targeted the critical newspaper Cumhuriyet in 2017, which also led to the detention of three lawyers. What started off as a solidarity march for lawyers turned into one that “defends everyone whose freedoms have been jeopardized.” Aytaç faced trial for “organizing and leading unlawful assemblies”—for being part of the peaceful solidarity movement that aims to demand justice for those whose rights have been violated.

If victims of rights violations do not believe that anyone will objectively defend them, people will not seek justice, either individually or collectively in court.

Even though he was eventually acquitted, he has been standing trial since June 2021 for insulting President Erdogan. Evidence used against him includes his criticism of amendments that were brought to the so-called Attorneyship Law—a change that risks a deeper divide between lawyers by creating multiple bar associations in large cities. Benan Molu explained that with this change, lawyers will now have to choose which bar association they will become a member. This will polarize the profession and expose bar associations that oppose anti-democratic practices. It will not only increase the risks for lawyers, but also for victims who now will be more hesitant to be represented by a member of a targeted bar association.

In light of the developments since 2016, Diego García-Sayán, the UN Special Rapporteur on the independence of judges and lawyers, stated that Turkey is one of the countries from which his office receives the most systematic information. He observes the targeting of lawyers in Turkey as “an ongoing authoritarian project.” Nacho Sánchez Amor, the Turkey Rapporteur for the European Parliament, emphasized that the entire issue in Turkey boils down to the corrupted judicial system, subject to constant interference from the government. He explained that he needs concrete cases in order for the EU to exert pressure through diplomatic means in Turkey, which it can because Turkey is a candidate country to the Union. Just prior to the launch event, the EU adopted its annual report on the (lack of) progress in Turkey, which Sánchez Amor characterized as “probably the most critical one in the history … of EU-TR relations.”

Yet the increasing oppression of lawyers is not unique to Turkey. Authoritarian governments silence critical lawyers while paralyzing the judiciary because it is particularly dissident lawyers who oppose deterioration of the rule of law. Independent lawyers promote the cause of justice, uphold human rights and fundamental freedoms, and hold the judiciary accountable when necessary.

In countries such as Turkey, where government dissidents, irrespective of their backgrounds and causes, are threatened, attacked and persecuted by the very state that is supposed to protect and promote the rights of all, it is essential that lawyers defend those in court whose rights have been violated. It is lawyers that ensure the right of defense—one of the fundamental principles of the right to a fair trial. But if victims of rights violations do not believe that anyone will objectively defend them, people will not seek justice, either individually or collectively in court.

While local civil society works together to promote and protect the rights of lawyers in Turkey, how can the international community support lawyers in Turkey? It is crucial that civil society and other countries continue to provide moral and practical support, and constantly remind the Turkish government that their actions are being watched. According to Sophie de Graaf, the executive director of Lawyers for Lawyers, despite the deterioration of the legal profession in Turkey, it is crucial to continue monitoring trials against lawyers,  engaging with international human rights mechanisms, and showing solidarity with individual lawyers and bar associations who are under attack by publicly recognizing their efforts.

The mission of the NHC is to build and secure justice and compliance with international human rights agreements within OSCE participating states. The NHC Human Rights Defense program has as its ultimate aim a shift towards a culture characterized by a systematic respect for human rights and for those who defend them.