While some economists and political scientists praise Botswana as a ‘success story’, the country provides more than just a tale of growth and stability.
By: James Kirby 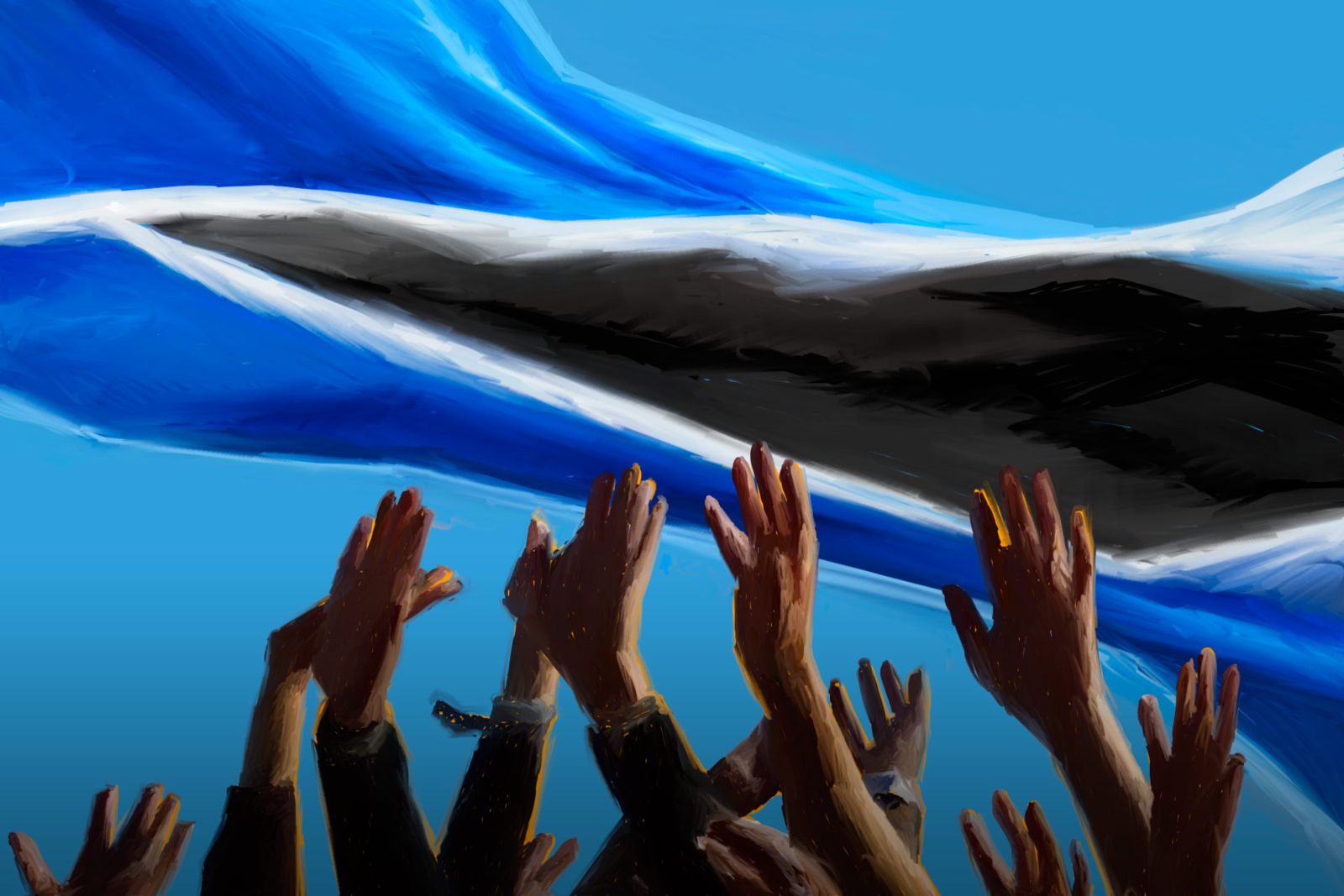 The 2016 Hollywood film, A United Kingdom, directed by Amma Asante, has raised public attention about the life of Seretse Khama. It depicts the romantic love story of Seretse, heir to the throne of the Bangwato people in the Bechuanaland Protectorate (now Botswana), and Ruth Williams, a white British woman.

Set in the immediate post-war period, the movie shows how Seretse and Ruth defied opposition to their interracial marriage from the British empire and the South African apartheid regime.

What is less well-known is the sequel to that story. Under Seretse Khama’s presidency from 1966 to 1980, Botswana maintained one of the best human rights records in Africa. The country stood as a model for freedom, democracy, and racial equality in southern Africa.

While some economists and political scientists praise Botswana as a ‘success story’, the country provides more than just a tale of growth and stability. Seretse’s government offers historical lessons on how the incorporation of human rights into policy-making can benefit core state interests.

For Botswana, a strong reputation in human rights became essential for survival. Seretse recognised how Botswana faced difficult challenges in geopolitics and economic development. Yet, his policy agenda began by entrenching the values of a free, tolerant, and rights-respecting society.

Seretse’s government offers historical lessons on how the incorporation of human rights into policy-making can benefit core state interests.

Botswana had unlikely prospects at independence in 1966. It was a landlocked state surrounded by hostile white minority regimes in South Africa, Rhodesia (now Zimbabwe), and South West Africa (now Namibia). The British left the country economically impoverished and dependent on its neighbours.

Decolonization remained incomplete in much of southern Africa, where colonial liberation movements were met with brutal forms of oppression and large-scale human rights violations. Botswana sat at the crossroads of this transnational struggle, facing decades of uncertainty, conflict, and turbulence in the region.

Seretse, as leader of the Bechuanaland Democratic Party (BDP), focused on the country’s moral power. His deputy, Quett Masire, articulated it best, stating “When you are weak, you have to stick to principles.”

The party dedicated itself to establishing a ‘non-racial democracy,’ a project that drew on human rights ideals in two key ways.

Firstly, the party committed to liberal-democratic freedoms. The BDP won an overwhelming majority in the first election with universal suffrage in 1965. By that stage, leaders elsewhere in Africa increasingly moved to a one-party state, claiming an authoritarian model brought greater security and development.

In a speech for a 1964 BDP conference, Seretse asked himself whether Botswana would follow an undemocratic path. He answered in favor of ‘freedom and basic human rights,’ welcoming political opposition and criticism about the government.

Secondly, the party focused on individual rights. In Bechuanaland, Africans experienced racial discrimination in politics, law, economics, and society. To address this issue, the BDP rejected anti-white sentiments and adopted a policy of ‘non-racialism.’

Botswana’s 1966 constitution safeguarded the rights of Africans and the small European population as individual citizens. The bill of rights enshrined equal rights to life and personal liberty; freedoms of expression, assembly, and association; and protections against racial discrimination and inhuman treatment.

Botswana remains one of Africa’s very few countries to have kept a multi-party system and constitutional bill of rights since independence. In the 1960s, it built the substance of a non-racial democracy, but lacked international recognition. Some analysts characterised Botswana as a ‘satellite’ or ‘hostage’ state of South Africa.

Seretse began rebranding the country’s image as a force for change in the region. Botswana’s values opposed those of South Africa, whose policy of ‘separate development’ sought the removal of African ethnic groups into pseudo-national homelands or ‘Bantustans.’

Botswana would expose the flaws of apartheid ideology by showcasing an attractive alternative. In 1965, Seretse told foreign media that his government aimed “to show that black and white people can live together quite harmoniously and work for the interests of their country.”

An appeal for aid sat at the heart of Seretse’s argument. In an address to the United Nations (UN) General Assembly in 1969, he explained how a “prosperous non-racial democracy…will add to the problems South Africa is already facing in reconciling its irrational racial policies with its desire for economic growth.”

The more external partners could help Botswana become a success, the greater the challenge the country would bring to the racist regimes of its neighbours.

Edward Brooke, an African-American senator, soon inserted Seretse’s UN speech into the United States Congressional Record. He added that “Botswana, in some ways more than any other nation, occupies a key position in the fight for human rights”.

For Brooke, countries like the United States that claimed to uphold human rights should assist those who promoted the same values. North American and European donors recognised Botswana’s symbolic significance by giving large aid packages.

Seretse’s government efficiently managed foreign aid and a mining boom in diamonds. In its first four decades, according to economic historians Ellen Hillbom and Jutta Bolt, the country had “the highest long-term growth rates in the world.”

Botswana also coped with regional instability, particularly after the 1976 Soweto Uprising in South Africa and the escalation of Zimbabwe’s liberation struggle.

Two years later, the UN High Commissioner for Refugees gave Seretse the Nansen Award for his country’s assistance to tens of thousands of people escaping racial oppression. While Seretse did not offer a base for armed liberation movements, neighbouring security forces launched cross-border attacks to intimidate Botswana and assassinate political opponents.

In response, Seretse became more outspoken on the right to national self-determination in southern Africa. This enhanced Botswana’s anti-colonial credentials amongst African countries, who rallied at the UN in 1977 to condemn Rhodesia’s incursions and call for emergency economic aid.

Seretse Khama died in 1980, but Botswana’s non-racial democracy outlived the white minority regimes. His vision for the region’s wider potential for inter-racial cooperation found affirmation most clearly in South Africa. The negotiated transition of the 1990s enshrined human rights in the legal architecture of the post-apartheid state.

Nonetheless, Botswana’s history from colonial protectorate to independent nation presents an example of how human rights ideals have had a constructive role in state-building, diplomacy, and development in Africa. Seretse Khama’s government proved how a prioritization of human rights, even in times of physical insecurity and weakness, could offer the most strategic pathway toward a stronger and more prosperous future.

Dr. James Kirby is an Honorary Research Fellow in history at La Trobe University in Melbourne, Australia. He has expertise on human rights, decolonization, foreign affairs, and contemporary African history. James’ work has been published in several peer-reviewed journals, such as The Journal of Contemporary History, The Journal of Global History, and Cold War History.