For environmental and human rights defenders in support of indigenous communities, one of the paths forward is through legal arguments. 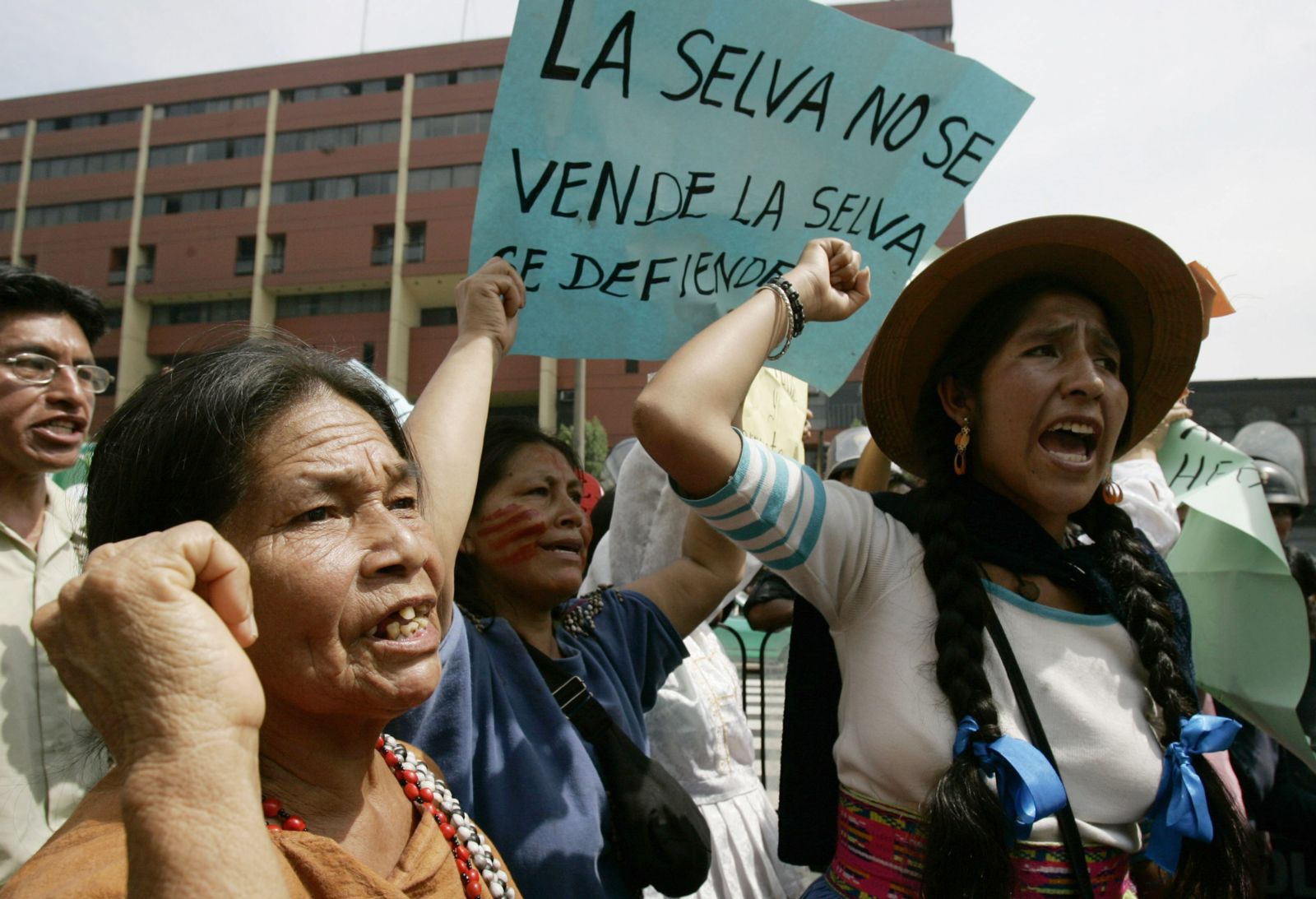 Several women participate in a protest organized by Indigenous peoples, farmers, and agrarian organizations in Lima, Peru. In this protest, which took place in May of 2009, they demanded respect for the rights of farmers and native communities, their territories, waters, forests, biodiversity and natural resources, and the withdrawal of oil and mining transnationals. EFE / Paolo Aguilar

Indigenous communities in the Amazon are on the front lines of fossil fuel development and deforestation, suffer various climate-related impacts, and are stewards of a climate critical area. Collaboration on legal actions to defend and strengthen Indigenous territorial rights and communities—especially as they suffer and resist activities that are disastrous for the climate and their communities—is an important part of the climate change litigation movement. Indigenous peoples’ efforts can and should be supported with compelling legal arguments that reflect their struggle.

The ancestral territory of Indigenous peoples of the Amazon is unfortunately home to two primary drivers of the climate emergency: oil development and deforestation. As many of us know, oil production in the Amazon generates greenhouse gas emissions, contributing to climate change. It also leads to deforestation, as the roads and infrastructure that are built to facilitate it are followed by both small- and large-scale agriculture. This also generates greenhouse gas emissions and eliminates carbon reserves critical for mitigating climate change. Alarming amounts of logging in the Amazon add to the problem, in large part because Peru and Brazil are the top two exporters of wood in the world. Much of the logging is carried out in Indigenous territory in the Amazon where it is not permitted, but papers are fabricated before sale as the wood is “washed” and then marketed to buyers in countries such as China and the United States.

Indigenous communities have been the first line of defense against these grave threats, fighting to make their territorial rights, enshrined both in national and international law, a reality. Legal organizations like EarthRights International have worked alongside communities in the Amazon and elsewhere, and have seen firsthand their fight to protect their territorial rights and environment against threats from both states and corporations.

For example, the Wampis Nation of the northern Peruvian Amazon recently stopped the development of an oil concession block in their territory that failed to take into account the Wampis Nation’s rights and the environmental impacts of the project. The Achuar communities, also of the northern Peruvian Amazon, brought Occidental Petroleum to court in the United States for contaminating the river on which the Achuar depend. And the U’wa people of Colombia continue their decades-long struggle against Colombia to guarantee their territorial rights and stop fossil fuel development on their land in a petition before the Inter-American Commission on Human Rights (IACHR).

Indigenous communities like these also fight for the rights of those Indigenous peoples living in voluntary isolation and initial contact (PIACI). The western hemisphere is home to the largest number of PIACI in the world, and in theory they enjoy legal safeguards intended to prevent natural resource extraction on their land, and avoid potentially devastating contact with the outside world. But states frequently fail to provide and enforce these protections. That is why the Indigenous federation FENAMAD, of the Madre de Dios region of the Peruvian Amazon, has an action to protect PIACI from logging activity and other threats in the region before the IACHR.

Indigenous communities are also actively collaborating to strengthen Indigenous governance. One inspiring example is the Sacred Headwaters Initiative, a recently formed coalition of Amazonian Indigenous organizations and their allies promoting the bi-regional, Indigenous governance and management of the Peruvian and Ecuadorian Amazon region. Through the Indigenous ancestral management and administration of these territories, they seek to leave the fossil fuels and mineral resources in the subsoil and thereby retain around 3,800 million metric tons of carbon.

It is therefore evident that in the face of grave threats, Indigenous communities, environmental and human rights defenders, and their allies have fought tirelessly to defend Indigenous territory and climate critical areas with legal actions and innovative strategies like those discussed above. These legal actions, largely based on the local impacts of extractive projects and the violation of territorial rights they represent, have been and continue to be extremely important to protect climate critical areas, guarantee the rights of Indigenous communities, and address climate change.

Indigenous peoples have repeatedly pointed out that guaranteeing their territorial rights is key to addressing climate change and meeting climate targets.

Such actions, however, have generally not included legal arguments related to climate change impacts that Indigenous communities suffer. Extractive activities in the Amazon do not just violate Indigenous territorial rights, diminish self-determination, and threaten cultural identity through their direct impacts. These very same extractive activities also contribute to the climate-related impacts experienced by Indigenous peoples. For example, Indigenous communities in Brazil have reported shifts in precipitation patterns, humidity, river levels, temperature, and fire and agricultural cycles affecting traditional ways of life that date back thousands of years. The differentiated impact that Indigenous communities suffer was also recently highlighted in a report to the IACHR. And tribes in the northwestern United States have produced detailed studies on how climate change has affected the natural resources on which they depend, efforts that should be replicated in the Amazon and elsewhere.

Nor in most cases have legal actions to protect and strengthen Indigenous rights been linked to national and international climate change obligations. This is so despite the connection between compliance with such obligations and the mitigation of climate impacts on these front line communities, and despite the connection between strengthening Indigenous territorial rights and reducing emissions. Indeed, Indigenous peoples have repeatedly pointed out that guaranteeing their territorial rights is key to addressing climate change and meeting climate targets.

Given that Indigenous and PIACI communities suffer both the direct impacts as well as the climate-related impacts of extractive activity in their ancestral territory, and given that they are excellent stewards of climate critical areas, more can and should be done to ground climate litigation in Indigenous rights, leveraging the climate litigation work already under way in other contexts on behalf of Indigenous communities.

For example, local climate change-related harms have been the subject of a wave of damages lawsuits in the United States against fossil fuel companies on behalf of municipalities and states, like the one EarthRights International filed on behalf of Colorado communities. And groups like Dejusticia of Colombia and the Legal Defense Institute of Peru have brought constitutional actions against the state for the failure to take adequate action on climate change in accordance with national and international obligations, linking on the ground deforestation to in-country climate change impacts that violate the fundamental rights of Peruvian and Colombian youth. Legal practitioners should leverage and adapt these important efforts and arguments in ways that center Indigenous territorial rights, climate-related impacts on Indigenous peoples, and the key role Indigenous communities play in reducing emissions.

Supporting the efforts of Indigenous communities to protect themselves and their territorial rights is urgent for their communities and the climate. Indigenous peoples’ struggle to defend their territory, the natural resources they depend on, and their relationship with those resources must be recognized as a key part of curbing climate change, and can and should be accompanied by forceful legal arguments based in that struggle.

Wyatt Gjullin is a staff attorney at EarthRights International.